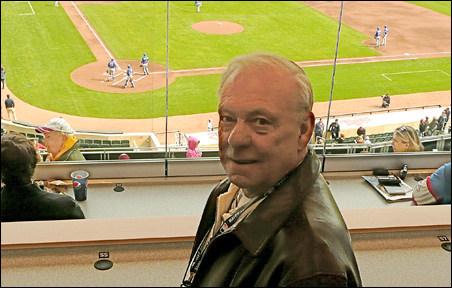 MinnPost photo by Jay Weiner
Of course Jerry Bell was on hand last Saturday for the Gophers game — the first one to be played at Target Field.

Rumor has it that Jerry Bell will throw out the inaugural pitch to christen Target Field on April 12 at the Twins first regular season game. If true, it would be wrong to label that toss the ceremonial first pitch.

Instead, it should be correctly recognized as Bell’s last pitch, a sort of poetic punctuation mark after 15 grueling years of lobbying, cajoling and serving as the iron horse pitchman for Twins owner Carl Pohlad’s stadium dream.

Bell is the rugged-faced, bass-voiced, 68-year-old patient and loyal soldier of the late Pohlad. It was Bell, beginning in 1995, who repeatedly took most of the face-to-face political heat for Pohlad, an often disliked outsider in Minnesota’s business community.

Bell, constant coffee cup in hand, moving calmly from office to office in the Capitol, State Office Building and other seats of government, somehow managed not to make enemies of his own.

How? Why? Because, Bell reasoned, that the lawmaker who voted “No” in 1997 might still be in a decision-making role to vote “Yes” in 2006. Or, a no voter might be a close friend of a yes voter. “You never want to offend somebody,” Bell said.

“The sports industry is the entertainment industry, and both are in the public acceptance business,” Bell told MinnPost last week. “People have to accept what you’re selling because they don’t need it. It’s not bread and butter. Therefore, you pay attention to what people are saying, and then you have to accommodate them.”

When the sun shines on that first American League game against the Red Sox in 11 days, history might suggest that Target Field be dubbed “The Facility That Opat Funded” because it was the Hennepin County leader who developed the idea for a county-backed stadium tax to take to the Legislature.

Or it could be “The Ballpark That the Pohlads Finished and Fine-Tuned,” what with nearly $200 million of private funding in the stadium.

But, all in all, the preponderance of the evidence shows that the $555 million Target Field is “The House That Jerry Built,” or, perhaps, “The Stadium that Bell Willed to Completion.”

Sort of like George Washington chopping down cherry trees and Abe Lincoln splitting rails, the legend of T. Geron Bell begins with him mowing lawns of playgrounds at recreation centers from West St. Paul to Apple Valley, a peasant turned lobbyist. Nice image, kind of true, if incompletely so.

Bell was born on the East Side of St. Paul but grew up in North St. Paul. His father was a draftsman for an architectural firm; his mother, a post-World War II 1950s housewife. Bell graduated from North St. Paul High in 1959, two years before the Washington Senators moved to the Twin Cities to become the Minnesota Twins.

After a three-year stint in the Navy, he got work taking care of the parks in North St. Paul while attending the University of Minnesota at night on the G.I. Bill. Thus, the lawn-mowing legend was born. But his early park-and-rec maintenance work morphed into park-and-rec management and Bell’s entrance into the sports facilities and lobbying business. It’s where the dots begin to connect to the lush green grass of Target Field, a lawn that he can gaze at constantly from his new office window in the left field corner of the stadium.

While working day-to-day in parks and playgrounds, he found his interest turning to funding for projects in the Twin Cities’ then-burgeoning suburbs. During the Lyndon Johnson Administration, Bell saw his first pieces of legislation passed in West St. Paul and then Apple Valley for parks, ice rinks and swimming pools.

Before long, it was time to move on and up. He jumped from being in the field to working for the fledgling Metropolitan Council. Along the way, he also won a seat on the North St. Paul School Board, so he understood the realities of being an elected official.

Bell and Metrodome longtime ‘partners’
By 1977, representing the Met Council at the Legislature, Bell helped pass a park bonding bill for $62 million. That was the same year that the first Metrodome piece of legislation passed, a bill, originally, with deep Met Council participation. Soon after, he was assigned to work on the downtown stadium project.

Since then, Jerry Bell and the Metrodome have been in various stages of a relationship. At the Met Council, he worked on fixing the stadium’s funding mechanism after a metro-wide tax was repealed, and the burden fell on the city of Minneapolis. He would also work on another controversial Dome matter: When former Twins owner Calvin Griffith refused to sign a 30-year lease, Bell and others devised an “escape clause” that eventually allowed Griffith to threaten to move the team. That clause triggered the sale of the Twins in 1984 to Carl Pohlad.

Bell would go on to become the executive director of the Metropolitan Sports Facilities Commission, which owns and operates and the Dome. And, by 1987, after dealing with Pohlad on a new lease, Bell switched sides, from landlord of the Minnesota Twins to president of the ball club and the Dome’s tenant, from public service to the private sector. 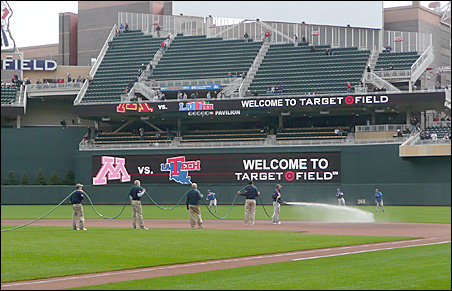 MinnPost photo by Jay Weiner
It took 15 years of efforts led by Jerry Bell to produce the lush green grass of Target Field.

In 2002, the stadium effort became his single-minded responsibility, and he became president of Twins Sports Inc., the umbrella organization of the team. For the first time in 33 years, with the Twins out of there, Bell and the Metrodome have no relationship.

Stability? Bell has lived in the same house in North St. Paul for more than three decades. He’s been married for 47 years. He lobbied for Target Field over the course of two decades, nay, over the span of two centuries. “Persistent” is one of the adjectives that Dave St. Peter uses in describing Bell.

Nothing, no proposed user fee, no flip-flopping legislator, no disinterested governor could seemingly bring him to the brink of complete frustration. Oh, when the first major Twins bill was defeated in 1997, he was disappointed. (Little did he know his efforts would need another decade.) When there was talk in 2001 that Major League Baseball might “contract” and eliminate the Twins, he was at a low point, St. Peter observed. (Bell disputes some history that declares that Pohlad “volunteered” for contraction, although he acknowledges Pohlad “never discouraged the conversation.”)

In 2004, he was close to simply quitting the lobbying; he felt he had lost his effectiveness. In 2006, he only went forward once more after gaining assurances from legislative leaders — Dean Johnson, Matt Entenza, Steve Sviggum and Dick Day — at one meeting at the Governor’s Residence that they were poised to see a Twins ballpark bill pass.

“I had gotten to know those people,” Bell said. “And when they said they would do something, they did it. I would consider all of those people friends.”

But, Bell said, there was always perspective, always the knowledge that a stadium campaign is just business. In August 1991, his 17-year-old granddaughter, Tonya, suffering from depression, committed suicide.

“There is nothing worse than that, nothing,” Bell said. “Nothing that ever happened here [with the Twins] ever came close to that.”

The effort to get to this moment, to the opening of Target Field, began in 1994, when Carl Pohlad first told the Metropolitan Sports Facilities Commission that he wanted a new ballpark. Bell’s burst onto the scene as the voice and face of the stadium campaign began on Sept. 11, 1995, when he called the Metrodome “economically obsolete,” and said the Twins needed, among other things: “a significant increase in quality seats and improved sight lines”; exclusive control over suites, in-stadium advertising, concessions and the ability to develop stadium clubs; and parking revenue.

Keeping his eyes on the financial prize, Bell won all of those things for Target Field, except the parking revenue.

His narrative was tweaked along the way, from the early-1990s notion that a ballpark provides massive “economic impact” to a state to the ultimate reality that a ballpark was necessary to preserve Major League Baseball in Minnesota. But that, really, was Bell’s message all along. “More than anything else, we need to ensure that Major League Baseball stays in Minnesota. For a long, long time,” Bell said in 1995.

So, he worked at it. Over time, divisions became apparent. Progressives viewed public financing for a ballpark as an opportunity cost that would negatively affect other, more significant social needs. Conservatives considered any new taxes anathema. Bell wandered around and through those bookends.

Dean Johnson, the former state senator, invoked military slang when he remembered only once when he saw Bell’s “pucker factor” — his fear and sphincter tightening — rise to desperate levels. Johnson, a brigadier general in the Army National Guard, said that moment occurred when a conference committee was formed in the final days leading up to the Twins’ final push in 2006. There was one member of the committee who was a vociferous stadium critic.

“Jerry came into my office, sat down with a cup of coffee in his hand and he looked at me like I had just traded Joe Mauer,” Johnson remembered. “He said, ‘I have one last request. We need to have a different alignment on that committee.’ “

Johnson told Bell to hang in there. He did. Soon after, the Twins ballpark bill passed in the House and, then, as the sun rose on Sunday, May 21, 2006, Johnson banged a few heads and got two final votes to put it over the top in the Senate, 34-32. Johnson remembers looking into the Senate gallery’s balcony, offering a thumbs-up to Bell sitting there, and Bell smiling broadly.

All that remained were four years of thousands of details, as Bell dived into matters as minute as the colors of carpeting to issues as tricky as upping the Pohlads’ investment in the building. He also worked with the city and county officials on transit and other development-related matters.

Which leads to this weekend, when the first Twins exhibition games will be played — and a certain crescendo that builds toward April 12, the official Opening Day. That’s when, perhaps, Bell will heave that ceremonial first toss, that final pitch for this veteran professional pitcher.