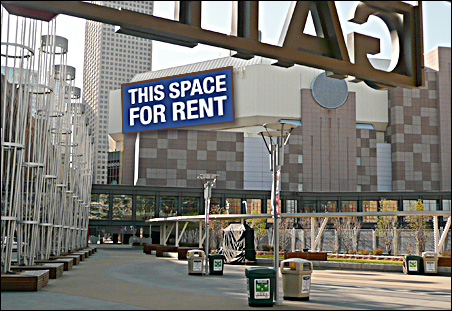 A sports facility is about to open in the Minneapolis Warehouse District. It is a monument to a new age in sports economics. It has about 60 luxury suites to aid in the team’s finances and to satisfy the desire of high-end customers. It has wider concourses than other previous Twin Cities facilities to allow for more points of sale for food and souvenirs. It recognizes that females are sports fans, too, what with the necessary abundance of women’s bathrooms.

Remember that anticipation? It was 20 years ago.

Today, as the Twins open Target Field, ticket buyers can gaze out from the third base side of the new ballpark, look toward the Minneapolis skyline and gulp at the less-than-attractive blocky and blank facade of neighboring Target Center staring them in the face.

What’s to become of the arena?
In the hoopla that is Target Field’s Opening Day, it may be a downer — but it is appropriate — to wonder about what’s to become of the arena, a sports edifice that was designed in the 1980s, that was impolitely outshined by St. Paul’s publicly funded Xcel Energy Center in 2000 and is now in need of, at the very least, repositioning in the marketplace.

A $60 million or so facelift inside — to move it into the 21st century — would be nice, too, but that ain’t gonna happen any time soon.

As Wolfenson and Ratner’s fortunes tumbled in the economic downturn of the early 1990s, the arena was rescued by the City of Minneapolis. After all, Target Center was that era’s centerpiece of the Warehouse District. Fifteen years later, the city still owes about $50 million on the arena mortgage. City Finance Officer Patrick Born has recently and deftly re-jiggered the arena’s finance plan to allow for another $50 million over the next 10 years to keep the building healthy — not to “improve” it, but to make sure its bones and nervous system — electricity, plumbing, waste management — remain state-of-the-art.

Because of Wolves attendance and the economics of non-sports events — such as concerts and family shows — Target Center operates in the red. The city alone picks up about $1.5 million in operating losses annually, with arena management company AEG covering the rest.

It’s no secret we have too many arenas and entertainment venues in Minneapolis-St. Paul, and both Target Center and Xcel Energy Center suffer from the glut as they compete for the same shows, with the artists and promoters benefiting the most, and the buildings eating it.

But don’t worry. The Timberwolves aren’t asking for a new arena. In fact, Timberwolves CEO Rob Moor, who, among other things, oversees strategy and facility issues for team owner Glen Taylor, wants Target Center to be known as a building that can adapt, not be disposed of, that can be an example of healthy longevity, not sports facility obsolescence.

Unlike the Metrodome, which was dubbed as “economically obsolete” for the Twins in the mid-’90s, Target Center is not for the NBA. The team and city have spiffed up the bowl of the arena in recent years. The team’s lockers have been improved by Taylor. Sound for concerts has been upgraded. The team has configured suites to address a market demand for lower-cost club seating. 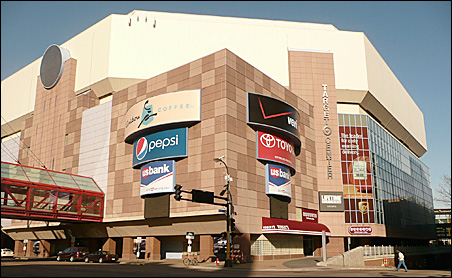 MinnPost photo by Jay Weiner
The First Avenue North side of Target Center offers a barrage of signage.

“It’s like remodeling your home — where do you stop?” asked Moor, who grew up in Switzerland and brings a certain European preservation mentality to his job. “Purely spending money isn’t going to guarantee me that people will be proud of Target Center. We have the opportunity to become a facility that Minnesota is proud of.”

Already, the arena has an exemplary green roof and, as part of the ongoing “refreshing” of the building, Moor would like to see it embrace a continuing green identity. Target Field and TCF Bank Stadium, the University of Minnesota’s new football playground, have gone the LEED route. It’s more difficult to take an older building and green it up, but Moor wants to do that; making sure new needed motors in escalators are energy-efficient, using non-VOC (volatile organic compounds) paint when sprucing up the place, and innovative trash-hauling techniques.

Moor wants Target Center to stop being old in the eyes of customers, and “start being clever.” You’ve got to root for that.

Target Center and the Wolves need to be nimble, too. The arrival of more luxury suites and club seats in Target Field and at TCF stadium has stressed the team on sponsorships and suite sales, because there is only so much corporate money to go around, and some of it has migrated out of Target Center to the next-new-things, costing the Wolves “hundreds of thousands of dollars,” Moor said.

Which takes us back to that ugly, blocky façade that sits atop Second Avenue North. For the first 20 years of its existence, that surface on the unseen side of Target Center had no value at all. It could be viewed intermittently from parking lots and freeways, but there was no captive audience for advertisers to affect.

Now it is eminently viewable by the 40,000 fans who will regularly fill Target Field and, more importantly, by TV cameras showing the Minneapolis skyline to viewers at home. That piece of aerial real estate is so valuable it was recently the subject of a law suit and three-day trial. The Timberwolves sued AEG Management after AEG said it wanted to control that space because it was so valuable. Hennepin County District Court Judge Charles A. Porter ruled in favor of the Wolves, who always believed their lease gave them control of this newly valuable signage opportunity.

But that’s not all. That signage is wrapped up in Moor’s ongoing negotiations with Target Corp. to extend the naming rights to the arena. Target pays about $1 million a year for its name to be on the arena, a deal that expires in 2011.

According to court documents, a Target representative told AEG reps that “the new exterior signage would have to be part of the naming rights deal if Target is to renew its agreement” with the Wolves. The current Target-Wolves deal prohibits the team from selling any advertising in or out of the arena to any “competing retailer.” But what if Target — which has invested so much in the ballpark and its surrounding cityscape — bows out of its arena partnership?

Can you imagine how much Target and the Twins would freak out if the Wolves sold Walmart or JCPenny a massive sign that blared into the eyes of spectators at Target Field and that was visible for all those gathering in Target Plaza? Not to mention all those watching in their living rooms at home?

Moor said he hopes Target will extend its naming rights deal with the arena, a publicly owned building that needs to live a long, prosperous and clever life.