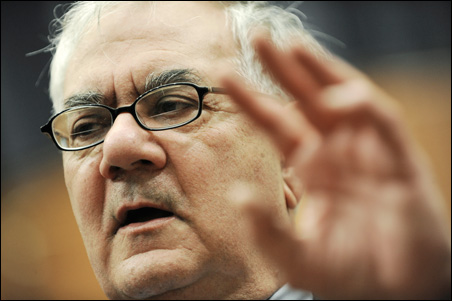 REUTERS/Jonathan Ernst
Rep. Barney Frank: “The era of light-touch [financial] regulation is over.”

Amid the many uncertainties about the complex financial reform legislation now seesawing through Congress, one thing is certain. Whatever the shape of the final package, it will be approved and become the law of the land. Soon.

The Senate will finish voting on the legislation by Memorial Day. Then Senate leaders will meet with their counterparts in the House of Representatives, which has already approved a bill, to iron out their differences. By the end of June, they will close the deal and send a final bill on to President Obama. He will sign it by Independence Day.

At least that’s the way Rep. Barney Frank sees it. “The era of light-touch [financial] regulation is over,” Frank told a Saturday gathering convened by the Caux Round Table, an international association of business leaders based in St. Paul.

Frank, the Massachusetts Democrat who chairs the House Financial Services Committee, is often cited as a pivotal figure — sometimes the pivotal figure — in steering the legislation through Congress. He made his prediction at a Minneapolis luncheon attended by about 160 financial services and public affairs professionals.

Frank is one-of-a-kind: street-smart yet elitist, witty, seldom-smiling and tough-talking, well-schooled in the way the nation’s financial system works and how elected officials and regulators in Washington interact with Wall Street’s powerful lobbies. His specialness is the topic of a biography, “Barney Frank: The Story of America’s Only Left-Handed, Gay, Jewish Congressman,” published last year.

Predictably, the legislation Frank is pushing has drawn many critics representing a vast multiplicity of interests. One worry, that the legislation is getting bogged down with complicated rules rather than driven more by easy-to-understand principles, surfaced on Saturday.

Karen Grandstrand, a former top regulator at the Federal Reserve Bank of Minneapolis now with the Fredrikson & Byron law firm, raised this issue as a panelist after Frank spoke. Later, she said she agreed with this “rules vs. principles” concern, advanced 10 days ago by Financial Times columnist Gillian Tett.

Others attack Frank directly, charging he has been too soft on Fannie Mae and Freddie Mac, the two government-sponsored entities that dominate the nation’s home mortgage market. He rejected that appraisal on Saturday, saying at one point that the government wiped out shareholders of both entities.

Republican critics also blast him for helping former Treasury Secretary Henry Paulson and other government officials orchestrate the federal bailouts of troubled companies in the wake of the 2008 financial meltdown. Last month, Tea Party activists targeted him for defeat in the fall elections. This week, Republican Sean Bielat, a former Marine Corps lieutenant, is expected to declare his candidacy to run against Frank. Backers see Bielat as a formidable challenger, but he faces a seriously uphill climb.

Frank was first elected in 1981 to succeed Father Robert Drinan, who declined to run again after Pope John Paul II called for priests to withdraw from electoral politics. Frank’s backers joke that the pope’s decision demonstrated his infallibility, because its effect was to send Frank to Congress. Since then, Barney Frank has been re-elected 14 times, in 2008 with 68 percent of the vote.

The first wave washed in a century ago, after the large corporations that emerged in the late 1800s abused their powers, triggering the birth of the Federal Reserve System, antitrust laws and other roles that brought the government into the market as a referee.

The second arrived in the 1930s, when the stock market crash and the Depression gave rise to the Securities & Exchange Commission (SEC) and a potpourri of other moves to limit unfettered capitalism.

This time, Frank argues, the biggest cause of trouble was the extent to which homeowners landed mortgages they shouldn’t have gotten. That problem was compounded by regulators who failed to regulate, a widespread assumption that housing prices couldn’t fall and the emergence of new financial instruments that totally eluded regulation.

He cited as an example of lax regulation the Bush administration’s move to replace SEC chief William Donaldson, an activist who advocated tough enforcement, with Chris Cox, who opted for a light touch.

Bill’s likely components
Frank mentioned these elements among those he expects to emerge in a final version of the bill.

• A requirement that loan originators keep at least 5 percent of the loans they book, so they can’t simply insure the entire loan and then leave the scene without any skin in the game.

• Public reporting for derivatives, the investment vehicles seen by many to have allowed the housing boom to turn into a bubble.

• A new consumer finance regulatory agency. Frank said the agency would have the power to regulate payday lenders and all nonbank mortgage lenders.

• A “say on pay” system that would allow shareholders to cast advisory votes, up or down, on the pay packages of up to five top executives at publicly held companies.

• A “resolution authority” empowered to wind down and end the lives of troubled institutions whose interconnectedness with the financial system is so extensive that it imperils the system. He quipped that Rep. Michele Bachmann, the conservative Minnesota congresswoman, had the “right idea but the wrong bill” when she famously charged the Democrats’ health care reform legislation included “death panels.”

He also alluded to high frequency trading on Wall Street, saying, “We are looking at this.”

Last Thursday, the Dow Jones Industrial Average went into a chilling free fall, plunging more than 1,000 points in less than half an hour and then rebounding to recover two-thirds of the loss. Some market watchers cite high frequency trading, a growing practice that now accounts for roughly two-thirds of all the trading on the New York Stock Exchange, as a factor in causing the free fall. In such trading, computers facilitate buying and selling of vast quantities of stocks in nanoseconds. The SEC has been examining such practices, in an investigation separate from the financial overhaul legislation.

Referring to the Tea Party movement, Frank said the anger about financial abuses is greater than he has ever seen. He suggested that if the country can’t do better at lowering “perceived unfairness,” the anger could grow to the point where it will limit its capacity to govern. Conservative Republicans who backed the bailouts, which he and others have defended as necessary to prevent a domino-like global financial collapse, could lose their seats, he said.

Concerns about the legislation plentiful, but …
One questioner wanted to know how great the fear is that financial institutions will escape stepped-up U.S. regulation by moving to less-regulated environments. “We understand that capital is very mobile,” Frank replied, but “there will not be a race to the bottom.”

Others in the audience voiced a wide variety of concerns about the emerging legislation. Curt Hage — CEO of HF Financial Corp., a $1.2 billion-asset banking firm based in South Dakota that wants to acquire banks in the Twin Cities — said a new consumer finance agency is not needed because six government agencies already have regulatory power over banks’ consumer finance activities.

Frank welcomed Karen Grandstrand’s concerns. He suggested that she send the principles she thinks should underlie the legislation to him. After the meeting, she said she would and mentioned two: that entities such as Fannie Mae and Freddie Mac should back only conventional 30-year, fixed-rate mortgages and that financial institutions shouldn’t offer products consumers can’t understand. 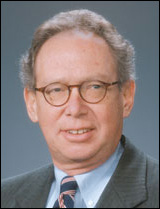 Also in the audience Saturday was Gary Stern, the recently retired president of the Minneapolis Federal Reserve Bank.

Stern said that while time will tell how effective any financial reform package will be, Frank’s forecast that legislation will be approved by early July sounded realistic.

Many who believe that Democrats and Republicans will manage to overcome their differences to approve an overhaul of financial regulations say the disgust of many Americans at Wall Street’s “disconnect” with their concerns has become so great that neither party can risk being seen as opposed to a broad overhaul of the system. That common thread could lead to enough agreement among both parties to cross their fingers and pass this legislation, whatever its effect will be.

Or as Stern put it, he went to the Frank event Saturday “confident that there will be legislation and that then everybody will declare victory. I didn’t hear anything to change that.”

Dave Beal writes about business and the economy. He can be reached at davebiz [at] q [dot] com.