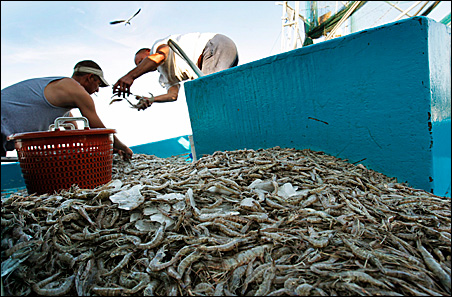 REUTERS/Hans Deryk
Shrimpers separate their catch at a processing plant at Joshua’s Marina in Buras, La. While some local fishermen have been hired by BP to assist in oil spill clean-up efforts, others continue to fish the bay side of the coastal waters.

Are prices for shrimp and other seafood creeping higher in your favorite Twin Cities markets?

If so, you can assign part of the blame to the deadly sludge spreading across the Gulf of Mexico as a result of BP’s oil spill.

You also should brace for prices to climb higher as the oil slick swells and contaminates more coastal waters.

“We’ve been talking with our big wholesaler out East, and they’re worried,” said Chris Nelson of Coastal Seafoods in Minneapolis. Coastal supplies more than 100 restaurants in the Upper Midwest and also sells seafood in two retail stores.

“Everybody has swallowed the fact that there may not be many Louisiana Gulf shrimp this year or Texas pink shrimp,” Nelson said. “But they don’t really know where the cap is going to be on this.”

While the contamination so far is concentrated in Gulf waters, it is affecting prices for seafood from suppliers in places like Ecuador and Costa Rica, he said.

Lunds and Byerly’s stores in the Twin Cities also expect climbing prices for shrimp and other shellfish, said Aaron Sorenson, a spokesman for the chain.

“Very little of our shellfish comes from the Gulf Coast region,” he said. “But with the recent oil spill, demand for shellfish from other sources will go up. … So it’s a basic supply demand issue. Supply has gone down, but demand hasn’t. The end result is that prices are likely to rise.”

No fishing allowed
More than 48,000 square miles of the Gulf have been closed for fishing as a precautionary measure to ensure that seafood from the Gulf will remain safe for consumers to eat, according to the National Oceanic and Atmospheric Administration. [PDF]

That left about 80 percent of the Gulf’s federal waters still available for fishing. And the waters closed so far are home to deep-water migratory species such as tuna and swordfish. They do not include the Gulf’s major sources of shrimp, grouper and other popular seafood caught in inner coastal regions.

But now the oil slick is licking up to coastal areas and threatening to spread into marshes where shrimp and other sea creatures breed.

As BP’s broken well continues to spew oil, much of the suspense in terms of fishing waters — and fishing markets, too — centers on the question of whether the slick will move into the so-called loop currents. The currents are defined by an area of warm water that comes up from the Caribbean, passes the Yucatan Peninsula and the Gulf of Mexico to reach the Florida Strait. From there it would be positioned to contaminate fishing waters along the eastern coast of the United States.

A tendril of light oil has moved close to the loop, NOAA said.

Toxic from top to bottom
Whether it is concentrated in the Gulf or spread much farther, oil can be toxic for lobsters, crabs, clams, oysters and other bottom-dwelling creatures, according to the U.S. Fish and Wildlife Service. [PDF] Those slow-moving creatures have no way to escape.

Even if some do survive, they could pollute the food chain for years to come because they accumulate high levels of contaminants in their bodies, and that can be passed on to predators. 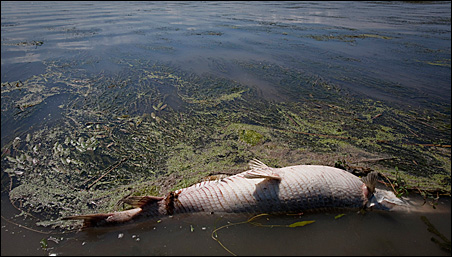 REUTERS/Lee Celano
A dead garfish lies in a marsh near Venice, La.

As for fish, the oil threatens them in several ways. They can take it in through their gills. They also can ingest it either directly or by eating contaminated prey. Adult fish who do that may suffer stunted growth, enlarged livers, heart and respiratory problems and fin erosion.

Further, toxins in the oil threaten the survival of eggs and larvae for many fish species, the Fish and Wildlife Service said.

Concerns about consumer worries
Even if all-out shortages do not materialize, one big worry for Gulf fisheries and Twin Cities suppliers alike is that consumers will see images of birds and other creatures caked in oily sludge and shy away from buying seafood altogether.

What’s a pinch in the pocketbook for us in Minnesota is an economic disaster for commercial fishermen and seafood processors in Louisiana. A consumer stampede away from seafood could ruin markets even for seafood that is perfectly healthy.

In an effort to allay those fears and protect consumers, federal and state governments have stepped up systems for monitoring seafood safety and keeping oiled products out of the marketplace, said officials from NOAA and the U.S. Food and Drug Administration.

That’s one reason NOAA moved to close a broad area to fishing. The agencies also are working on a plan for sampling fish inside and outside the closure area as well as at docksides and markets.

Hiccup here; indigestion over there
In Minnesota, much of the shrimp and other seafood offered for sale doesn’t come from anywhere near the Gulf, said Nelson at Coastal Seafoods.

Coastal wasn’t carrying Gulf oysters, for example, even before the explosion on the Deepwater Horizon rig. That’s because of longstanding concerns over vibrio infection, a bacteria-caused illness usually associated with eating raw seafood. The Centers for Disease Control and other agencies identified the Gulf coast years ago as a source of the infection.

The seafood industry has developed techniques for decontaminating oysters, but Coastal isn’t taking any chances. Said Nelson: “We don’t bring them in from the Gulf at all.”

So, if you like your oysters raw (as I do), you’re probably eating catch from the Northeast or the Pacific Northwest when you sit down to an oyster bar in the Twin Cities.

The vast majority of the shrimp sold across the United States is not from the Gulf either. Indeed, most of it comes from foreign suppliers, and a good share is farmed rather than wild-caught.

Like everything from T-shirts to sauvignon blanc, the market for seafood is international. That means U.S. consumers don’t have to depend on the Gulf. But it also means that a hiccup in one part of the world can cause indigestion everywhere.

“Shortly after the catastrophic accident in the gulf April 20, fish purveyors began paying more for shrimp — a product already in short supply — and for other shellfish, as well,” Crains New York said this week.

One result is that the shrimp on our restaurant plates may be shrimpier in the future.

“The supply is tighter, and it’s driving the prices through the roof,” Ron Licht, co-owner of Scandia Seafood in New York told Crains. “It’s going to affect the restaurants as people who bought a larger shrimp buy smaller [less expensive] shrimps,” essentially trading down.