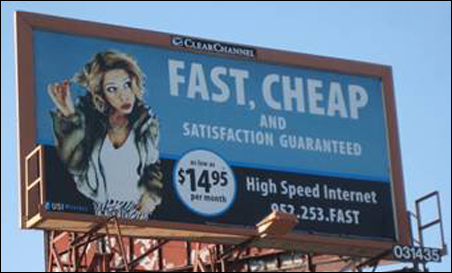 Call it the Facebook face-off: In the wake of a protest campaign that took place over the last couple of days almost entirely on the social networking site, at least a dozen billboards that some Minneapolis residents found offensive are coming down.

According to City Council Member Gary Schiff, Clear Channel Outdoors already has taken down several of the billboards, which advertise USI Wireless high-speed Internet service. The ads show a woman who appears to be a prostitute glancing at a headline that promises “Fast, Cheap and Satisfaction Guaranteed.”

Aware of this, a resident of Schiff’s south side 9th Ward, Stacey Burns, brought the billboards to his attention yesterday in an email.

Burns said she first saw a photo of a billboard at East 38th Street and Cedar Avenue South near her house on someone else’s Facebook site two days ago and called USI to complain.

“I thought surely when I tell them this is offensive and why, they’ll take them down,” she said. “There are still lawn signs up along Cedar saying, ‘Keep johns out.'”

Schiff, shocked at what he saw, went to Burns’ Facebook page where several people had commented that they had complained to USI but were told the company did some test marketing “and everybody loved it.”

Schiff then talked to city staff, who told him they had been talking to USI’s founders for three days but had gotten nowhere. Schiff also called USI, but said his calls were never returned.

USI Operations Manager Sam Turner said it was the company’s decision to take the billboards down.

“We didn’t mean to offend anyone,” Turner told MinnPost. “Our response to the overall situation is we didn’t, and don’t, feel that the spokesmodel from the ad looks like a prostitute. We’ve seen way worse.”

“I looked at the photo [in Burns’ post] and saw the Clear Channel logo and remembered that Clear Channel was extremely supportive in donating billboard space for the city’s anti-prostitution campaign,” said Schiff.

He called the advertising company’s vice president and e-mailed him an image of Burns’ Facebook page. “Thirty minutes later, he called back and said, ‘They’ll be down tomorrow,’ ” said Schiff.

Schiff said he knew the company had strong decency guidelines.

Naturally, Schiff posted the news on his Facebook page, where it quickly elicited dozens of comments and “like” votes.

Council member Elizabeth Glidden said she talked to both of the Internet company’s founders, Joe Caldwell and Kurt Lange, and that after some back and forth, they agreed to take the billboards down.

“My message to them was, ‘I hope you’re taking these down right now,’ ” she said. “Was it persuasive for me to say I’m shocked and disgusted? Yes, I’m sure it was.”

Schiff would like USI to go a step further. Council President “Barb Johnson woke up this morning to this image on a door-hanger,” he said. “I hope USI Wireless does the right thing and cancels this image in all its forms.”