If politics is as much about style as substance, the DFL would appear to again have its hands full in the gubernatorial campaign now unfolding.

This morning was a classic example of the style differences between Tom Emmer, the Republicans’ endorsed candidate, and Margaret Anderson Kelliher, the DFL’s endorsee. Both were at the secretary of state’s office — at different times — to file for office. (The filing fee is $300 each for governor and lieutenant governor.)

Kelliher arrived first, shortly after 8 a.m., accompanied by her running mate, John Gunyou, and her campaign manager. A handful of supporters greeted her with applause. She briefly acknowledged the cheers and went about the business of filing.

Gunyou noted that the notary, Nancy Breems, who was witnessing the process, was wearing a Neil Diamond trinket on her necklace.

“Went to his concert years ago,” Breems said, “but it’s one I’ll never forget.”

Gunyou said that he, too, had been to Diamond concerts and loved them.

“We once played ‘Sweet Caroline’ in the governor’s office while we were negotiating,” she told Breems and Gunyou. “Sen. Bakk wanted it so I played it on my iPhone.”

That little comment was the last moment of easy-going conversation on Kelliher’s part.

Formal Kelliher
After filing, she met with reporters and, in formal, play-it-safe tones, answered a few questions from reporters.

The Kelliher-Gunyou campaign, she said, is going to cross Minnesota “corner to corner … talking about the values important to Minnesotans. … Job One is more jobs. Job Two is solving the budget.”

She was asked if support from Education Minnesota might actually harm her campaign, given the frustration so many seem to feel with the status quo in the state’s educational system.

She suggested that her primary opponents “might be jealous of me having that support.” She talked about the importance of “accountability” in education and then moved on, Gunyou following. 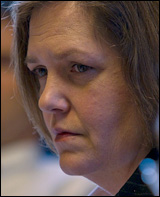 Even in this relatively informal session, Kelliher had refused to show her own personality.

Emmer wasn’t supposed to file until 9:30, but he showed up a half-hour early to schmooze with everybody in sight. He laughed easily, shook hands, laughed some more.

He talked of how his spouse, Jacqueline, was at home, doing last-minute preparations for a four-day get-away trip she’s set up. “We’ve dispersed the [seven] kids,” said Emmer.

He talked about once you’ve got more than four kids, people stop inviting you to dinner, but that the Emmer clan has found soul mates west of Delano.

Talkative Emmer
Emmer, a former hockey player who’s now a coach, lapsed into talk of the “cosmic forces” coming together. He was born in 1961 and that was the last year his favorite team, the Chicago Blackhawks, won the Stanley Cup. The Blackhawks will win, he’ll win, and all the forces are coming together. Then, he laughed.

Emmer was asked about a quote of his in today’s New York Times: “You cannot Band-Aid the Good Ship Lollipop. It’s time to completely restructure the hull.”

Emmer has made similar comments throughout the campaign, but what of specifics?

“Oh come on, man,” said Emmer. “The governor doesn’t have to put out a budget until after he takes office. … Before we start telling you what needs to be done, we’re traveling the state of Minnesota listening.”

“We’ve got four agenicies that deal with water,” Emmer said. “Health, DNR, PCA, BOWSER … Does that make sense? So much duplication.” 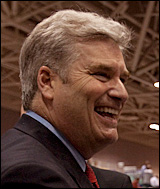 He said he realizes some in government will take offense at what he’s saying, but he’s not particularly concerned.

“It’s like lawyers,” he said. “You get two lawyers together, and the one thing they agree on is how dumb the third one is.”

The point? Even government workers would agree there’s too much duplication, but it’s always “the other guy” that’s the problem.

“Do we have all the answers?” continued Emmer. “No, we don’t. But I do know that government is supposed to be a services business. We’re supposed to support the people who elect us. From the seat I’ve had on the inside [as a state representative], government too often is about protecting government, not people.”

The Republicans turned this filing day into a huge rally, inviting scores of its legislative candidates to file together. Then, they gathered in a room across from the secretary of state’s office.

The room was jammed. TV lights were on. Several fiery speeches about pending Republican triumphs were given. Candidates and reporters and Republican Party officials were sweating.

Emmer stepped up to speak.

There was huge applause. He spoke with passion and humor, and the room got hotter and hotter.

“This feels and smells like a locker room,” he said.