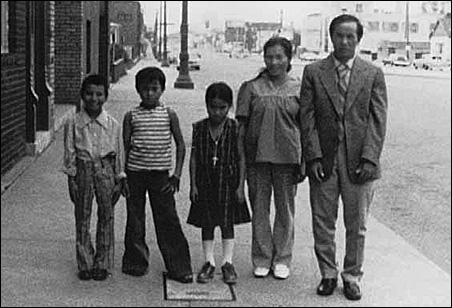 Courtesy of the Minnesota Historical Society
The Yong Vang Yang family on their first day in St. Paul, June 20, 1979.

Let’s face it. In the brouhaha over Arizona’s new immigration law, “immigrant” generally is taken to mean “Latino.” And the stereotypical target is someone who swims, tunnels or climbs a fence to breach our nation’s southern border and claim a low-skill job.

But immigration in Minnesota and across the nation has many different faces. And part of the argument, as the debate catches on politically here, is whether an Arizona-style crackdown would threaten the rights and liberties of a broad range of immigrants.

In the heat of that debate, a timely new profile of Minnesota’s immigrant population comes from Minnesota Compass, part of a research arm of the Amherst H. Wilder Foundation in St. Paul.

With fewer immigrants than most other U.S. states, Minnesota may seem far removed from the national debate. But the state’s foreign-born population has grown dramatically in recent years.

“In 1980, about three percent of our residents were foreign born, compared with seven percent in 2008,” Minnesota Compass said in the report.

All told, nearly half a million Minnesota residents have at least some stake in immigrant issues — counting some 346,000 who were born in other countries and another 148,000 children who were born in the United States but have one or more foreign-born parents.

Look more closely at kids in Minnesota, and you see a stronger stake. One in every seven of Minnesota residents who are age 19 and younger is a child of an immigrant. 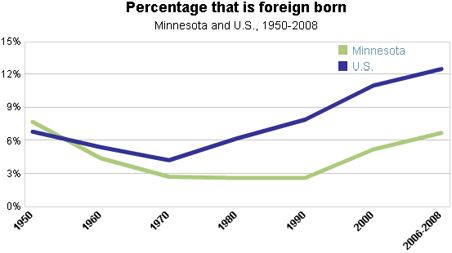 Diverse, urban and working
Here are some interesting features from the Minnesota Compass profile:

• While immigrants are transforming many smaller communities across the state, 80 percent of the state’s foreign-born residents live in the Twin Cities 7-county region.

• Nearly 73 percent of the foreign-born adults are working, which is very close to the proportion of native-born adults who go to work.

What may be surprising is that roughly 31 percent of the foreign-born Minnesotans hold a four-year college degree or higher, nearly the same as the native-born population.

On the other hand, 28 percent of the foreign-born adults lack a high school degree or GED, starkly different from 7 percent which represents Minnesotans born in the United States who lack high school degrees or the equivalent.

Crossing the political divide
There is no question that Minnesota also has its share of illegal immigrants. The Pew Hispanic Center estimates [PDF] there were 100,000 to 200,000 illegal immigrants in the state in 2008.

A bill that would have brought an Arizona-style crackdown to Minnesota went nowhere in this session of the Legislature. But the issue is sure to roil through this year’s election campaigns. Rep. Tom Emmer, the GOP-endorsed candidate for governor, said on Minnesota Public Radio that Arizona’s law is a “wonderful first step.”

Even some Democrats may agree. A new nationwide survey shows that Democrats are crossing a political line on this issue.

A solid majority from across the political spectrum — 59 percent of Americans polled — favors the Arizona law empowering police to stop and detain people who are suspected of being in the country illegally, according to the national survey by Pew Research Center for People & the Press.

Frustration with federal inaction
The poll didn’t dig into the reasons the controversial law is so popular. It did show some frustration with President Barack Obama’s handling of immigration policy — and, by extension, one could say with Congress’ failure to overhaul immigration law.

Another reason, no doubt, is fear that the nightmare of Mexico’s violent drug wars will spill into this country.

Yet another likely reason is our jobless recovery from the Great Recession. This factor, in particular, speaks to a broad range of immigrants, not just those who entered the country illegally.

A common refrain sounded in the debate leading up to passage of Arizona’s law was the claim that immigrants are taking jobs away from Americans who already were here, according to FactCheck.org.

“Could your job be next?” asked an ominous TV ad that was aired in Arizona, according to FactCheck. The ad was sponsored by Coalition for the Future American Worker, which identifies itself on its website as “an umbrella organization of professional trade groups, population/environment organizations, and immigration reform groups.”

The ad did not distinguish between legal and illegal immigrants.

“Study after study has shown that immigrants grow the economy, expanding demand for goods and services that the foreign-born workers and their families consume, and thereby creating jobs,” it said. “There is even broad agreement among economists that while immigrants may push down wages for some, the overall effect is to increase average wages for American-born workers.”

Former President George W. Bush was among the experts it cited to support that conclusion. Bush’s 2005 Economic Report of the President [PDF] said: “The foreign-born are associated with much of the employment growth in recent years. Between 1996 and 2003, when total employment grew by 11 million, 58 percent of the net increase was among foreign-born workers. … [E]mployment of natives as operators, fabricators, and laborers fell by 1.4 million between 1996 and 2002, while employment in such occupations grew by 930,000 among the foreign-born. This should not be taken as evidence that the foreign-born displace native workers; rather, it reflects the fact that immigrants have made up all of the growth in the low-skilled workforce.”

Minnesota Compass projects in its report that a similar trend will continue in the state’s future: “Immigrants and their children will make up an increasing share of our state’s workforce in the coming decades, helping to fill worker shortages as baby boomers retire.”

Those are points worth considering. But they’re unlikely to end the debate as long as the unemployment rate remains stuck above 7 percent in Minnesota and close to 10 percent nationwide.