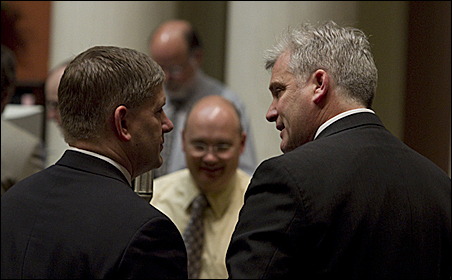 It was about 4 o’clock Saturday afternoon at the Capitol. House Minority Leader Kurt Zellers was in casual conversation with a few people when suddenly, there was a loud interruption.

Zellers looked over at his old pal.

“If you’re going into negotiations, I’ve got some resolutions for you,” Emmer yelled.

“I mean it, I’ve got some resolutions,” Emmer said.

As recently as Friday, it appeared that the DFL-controlled Legislature and Gov. Tim Pawlenty were on the verge of agreement.

But then Emmer and his compatriots got into the act. They wanted nothing — nothing — that looked like any form of compromise with the majority party.

A year ago, of course, Emmer could be — and frequently was — ignored by members of his own party. He was just a bomb thrower in the back row of the House chamber.

But now he is somebody. He now represents his party at the top of November’s ticket.

A budget balance compromise that seemed so possible Friday seems further away.

Yes, early this morning, the DFL-led Legislature did pass a budget-balancing bill that included no new tax revenues. But that bill is almost certain to be vetoed by the governor, because the Republican caucus doesn’t like the DFL proposal to tie the budget bill to shifting poor and low-income Minnesotans from state-supported programs to federally financed Medicaid programs.

This would provide a financial windfall for Minnesota, DFLers say, and cover more Minnesotans than currently covered.

It’s not much different from proposals being advanced by Republicans last year, and, even a few months ago, but now the Repubicans, particularly in the House, are comparing it to “Obama-care.” And that’s bad, bad, bad.

Change or no change?
“When you’re so much the party of ‘No’ that you’re even against your own proposals, you’ve entered the world of the bizarre,” said House Majority Leader Tony Sertich, clearly frustrated. “How do you negotiate with somebody who’s not even for their own ideas?”

Zellers, though, is nonplussed by the DFL allegations.

“Things have changed,” the minority leader said. “That was last year. Since then, the feds have taken over with Obama-care. A lot has changed. Going back and saying who said what and where doesn’t do any good now.”

Pawlenty spent considerable time with the Republican caucus leadership early Saturday evening. Later, he met with the entire House caucus. Later still, Senate Republicans entered the governor’s office. No one knows for sure what the governor was telling his fellow Republicans, but it seemed as if he was negotiating as much with Republican legislators as he was with DFLers.

Oh, what a mess all of this is.

Personal political ambitions, it seems, have become wrapped up in policy decisions on what might be good for the state.

Many believe Pawlenty wants to be done with this business, so he can get back out on the national campaign trail.

Emmer is wandering about the Capitol with resolutions, opposing everything.

Kelliher caught in the middle
And then, of course, there is House Speaker Margaret Anderson Kelliher, the endorsed DFL gubernatorial candidate.

Early Saturday evening, before everything was falling apart, she seemed at peace. She was showing pictures of “Kelliher for governor” signs that were being installed by friends and family. Clearly, she thought this session was on the verge of ending and that the DFL was going to get something from the session and that she could begin, in earnest, her primary campaign against two well-funded foes, Matt Entenza and Mark Dayton. 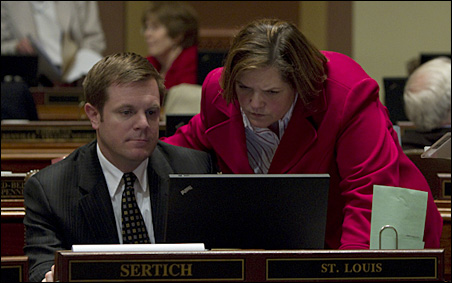 But by 11 p.m., the relaxed Kelliher was gone. She and Sertich and Rep. Tom Huntley stormed out of a negotiating meeting with the governor. Kelliher looked neither left nor right as she walked, double time, past reporters.

Most assumed that she was angry at the governor.

Kelliher needs two things from this session: a quick end and something that she can spin as a small triumph, such as the DFL’s proposed switch to Medicaid.

Her political position in all of this is fraught with peril.

Rep. Tina Liebling, DFL-Rochester, summed up Kelliher’s dual positions as speaker and gubernatorial candidate thusly: “There’s an old Yiddish saying. ‘You can’t ride two horses with one tuckus.’ She’s done this as well as it can be done, but it’s so difficult.”

On the left, Kelliher is being told the DFL has already given up too much to Pawlenty. But, on the other hand, she’s being told that the only thing most Minnesotans want is for the Legislature to finish its work on time and that the vast majority of voters are indifferent to details.

Absurdist moment: prom-goers on parade
In the midst of all this growing tension, there were moments of the absurd.

For example, at about 11:30, reporters and others hanging around outside the governor’s office were stunned to see about a dozen lovely young couples, in formal wear, stroll into the area.

Turns out the young people were students at Rosemount High and had been attending their school’s prom in downtown St. Paul. Now, with a small bus — they called it “our limo” – they had decided to tour the city, stopping first at the Capitol.

They were as stunned to see so much activity. There were TV cameras everywhere, grumpy reporters, a discarded pizza box was on a bench, with one slice of un-eaten pie.

“We’re going to the Cathedral next,” said one young man. “We still have time on our limo.” 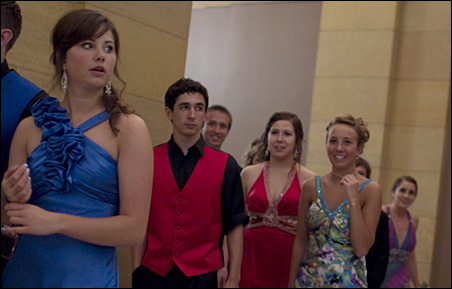 They seemed genuinely intrigued by the fact that difficult political negotiations were going on just beyond that door to the governor’s office.

When they left, reporters suddenly stopped talking about politics and recalled their own prom nights. None could remember having even considered going to tour the Capitol.

“Might have been luckier if I would have,” mumbled one DFL legislator.

And while promsters and pols came and went, the night wore on and on and legislators hung out, waiting to be called back to session.

Rep. Frank Hornstein, DFL-Minneapolis, was regaling anyone who would listen on the vital aspects of being a legislator on these all-night sessions.

“You don’t want to be the one who some photographer catches sound asleep in your seat,” he said in talking about Politics 101.

A few seats away, Rep. Alice Hausman, DFL-St. Paul, was talking, with contempt, of how even the most frugal Republicans are willing to hand out money if there’s political advantage involved.

She talked of how suddenly $3.7 million in cash had mysteriously been discovered and a bill was passed giving the money to cities in flooded areas to be used to clear away debris. This money, she said, was passed quickly through the process, despite this “No” session already coming up with $63 million in bonding money for flood mitigation programs and the feds annually kicking in about 25 percent of the funds used in flood control programs.

“We have no money,” she said. “That’s all I’ve heard this whole session. But suddenly we have $3.7 million and every Republican, except one, voted for giving this out.”

There are votes in those areas that flood.

The Senate and House will reconvene this afternoon and try again, this time facing a midnight deadline. But now nerves are really frayed, and tempers hot. In other words, all’s normal.