You might not have heard of it, but a short film by a Minnesota director has taken the film festival world by storm.

A beguiling take on the redemptive powers of young love, “By My Side” has won acclaim in the Los Angeles Film Festival, The Shorties in Washington, D.C., and the Tower of Youth Festival in Sacramento, Calif. Its creator, Sam Ekren, was even named best director at the Newport Beach Film Festival.

Not bad for a teenager from Nevis, Minn., population 364.

On Friday, Ekren, 18, will graduate from the high school at the Perpich Center for Arts Education in Golden Valley.

When he accepts his diploma, he’ll have a lot of the things high school graduates hope for: acceptance to the college of his choice, scholarships to offset the cost of attending and every reason to believe he can realize his dream of making movies.

Ekren’s story sounds a little like a Hollywood fable. When he was in the first grade, Ekren’s parents, Cindie and Keith Ekren, gave him a home video camera. At first, Ekren’s movies starred Beanie Babies and other toys, but he quickly graduated to making “silly videos” of friends. 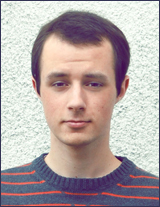 “The idea of movies always inspired me,” he said. “Random ideas come into my head. I’ll sketch stuff out until I decide how it’s going to come together.”

One night, he and friends shot a late-night cake fight in his living room. His parents, who slept through the whole thing, were particularly stunned by footage of the kids cleaning up that served as a backdrop for the credits at the end.

Ekren was attending Nevis’ lone K-12 school when his mother heard about the Perpich Center’s arts high school. It seemed a world away.

“I was really unsure,” he recalled. “After I auditioned and went through the admissions process, I was just floored. I wanted to be there so bad.”

The high school is unique in Minnesota. It’s public, free and open to any 11th- or 12th-grader who demonstrates they’re a good fit. It’s operated by a state agency that’s charged with nurturing arts education throughout the state.

About half of the school’s 300 students live in a dorm on one corner of a 33-acre campus that looks more like a private college than a high school. In addition to one of six arts concentrations, students receive instruction in basic subjects like math and social studies.

“By My Side” by Sam Ekren

During the time he has been enrolled in the school’s media arts program, Ekren has made a number of films and shot tons of photos, many of which are available on his online portfolio.

“By My Side” clocks in at slightly less than four minutes. If that sounds underwhelming, consider that to animate the film, Ekren shot thousands of still photos of two actor-classmates from the theater program, whittled it to the roughly 3,600 frames needed to tell his love story and edited the whole together using a sophisticated software package.

The end result is a sweet and compelling piece of storytelling. The film opens on a young man (Stanton Pavlicek) wearing a completely featureless white mask. After going through the motions of his mundane morning, he meets a young woman (Rachel Miller) who leads him on a series of adventures that seem ordinary and small — until you consider the logistics of animating them.

The sweethearts go sledding, for instance, both up and down a snowy hill that betrays nary a footprint or other sign that Ekren and his crew spent hours positioning actors and sleds in various positions on the hill.

We learn that the protagonists have fallen in love when cocoa spills from a mug and arranges itself into a neat brown heart. Mini-marshmallows weave their way toward it, eventually forming a lacy border. A song by former Arts High students Arone Dyer and John Deiley is the only audio. 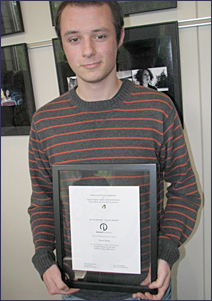 Does the masked hero acquire an identity? No spoiler here; interested parties will have to watch the tender denouement for themselves.

“I wanted to encourage people to open up and be playful,” said Ekren.

In the fall, he will enroll at New York University’s prestigious and highly competitive Tisch School of the Arts. The program is widely regarded as one of the two best film schools in the country.

Earlier this month, Ekren won a $2,500 scholarship from Internet Broadcasting and the Upper Midwest Chapter of the National Academy of Television Arts and Sciences, which awards the regional Emmy awards.

When he toured the college last fall, Ekren had the same feeling he had when he first visited Arts High. “It’s just a world apart,” he said.

What comes after film school? Ekren doesn’t know. But with a decade of movie-making under his belt, he’s confident it will be something good.

“There are like 100 different steps in the filmmaking process,” he said. “I’m sure I can find a place in there.”

With 4-minute creation, Minnesota teen Sam Ekren is the toast of the nation’s film festivals