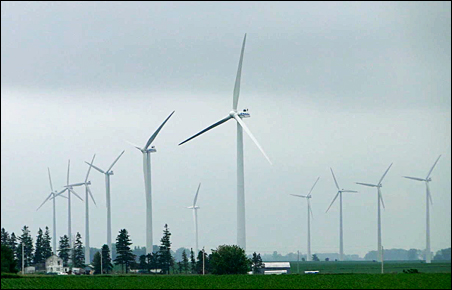 MinnPost photo by Joe Kimball
Most wind farms in the state have cropped up in southern Minnesota fields.

Stately rows of wind turbines towering over Minnesota corn and soybean fields might be looking a bit more attractive — and even patriotic — these days, as we watch tens of thousands of barrels of crude spewing each day into the Gulf of Mexico, and see pictures of those oil-spattered birds.

Around the state, thousands of the gangly turbines have sprouted on wind farms, particularly in the “wind tunnel” that extends from far southwestern Minnesota toward the east, a bit north of the Iowa border.

Even more wind farms — and their attending controversies — are proposed for other rural parts of the state, and some are even showing up in urban areas as the state moves closer to its requirement of having 25 percent of its energy generated by wind power by 2025.

(I have some experience with wind farms: My wife, Julie Kramer, and I own a small Iowa farm tract that has a wind turbine, and Julie’s new novel features a subplot involving wind farms.)

Gov. Tim Pawlenty has been a big advocate of wind power, saying recently in Rochester: “(Wind power) is going to continue to grow because it is increasingly accepted economically and otherwise.”

Some recent opposition
Still, there’ve been several instances recently of organized opposition from people who don’t want the giant wind behemoths close to their farms or homes. Generally, they want tighter regulations in the midst of uncertainty about the effects of noise and vibrations on human health.

Not everyone living in the shadows of the turbines, though, sees a problem.

“The highway traffic and our house fan are both louder than the turbines,” said Debi Schwemmer of rural Dodge Center. One turbine stands about 500 east of her house on Hwy. 56. Others loom in the near distance.

Earlier this year there was some angst around the state when reports showed Minnesota had fallen in the national wind rankings from fourth to fifth place. Not to worry, say the experts: We’re doing just fine; other states are just catching up.

‘A very sustainable path’
“Some of the stimulus money helped other states, and while they moved up, we stayed still,” said state Sen. Ellen Anderson, chair of the Senate’s environment and energy committee.

“Our renewable energy standard is so aggressive that I don’t worry about the ups and downs. Over time, we’ll get there on a very sustainable path.”

Anderson said that energy transmission is the next key — getting the electricity from the turbines to the grid. Enough wind projects are on the drawing board in the state to achieve the 25 percent goal, but the transmission bottlenecks are holding up some approvals, she said. 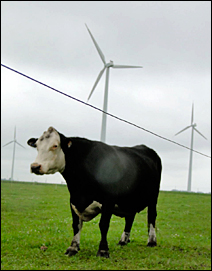 Last week the Minnesota Court of Appeals upheld approval of the 1.7 billion CapX 2020 project to build three high-voltage transmission lines that would stabilize the grid and deliver more wind energy from the Dakotas and western Minnesota.

Those against the power lines, though, vowed to continue their fight. The groups had argued that the power lines aren’t needed because energy demand had been declining. There are also property-rights issues, and concerns about wildlife.

“There’s some push-back, that’s natural,” Anderson said. “But we’ve still got a lot of open space that not next to homes where we can site more turbines.”

And she once heard from a man who thought the sound and vibrations from a nearby wind farm was affecting his hearing.

State officials are so enamored with the idea of generating electricity with wind power that they’re now considering whether to start using turbines on state-owned lands.

“We want to grapple with the issues of where wind turbines would be appropriate,” Anderson said. “Some pristine areas would not be appropriate, but in other cases the turbines might not impair the views and might be okay.”

Also being examined is the possibility of putting turbines on school trust fund lands, as another way to generate income — along with the sale of timber and minerals — for state school districts.

Windy NIMBY?
Most wind farms in the state have cropped up in southern Minnesota fields, but with many of those prime locations now already plucked by wind developers, some are looking further north.

A proposed wind project in central Minnesota’s Stearns County, though, brought out much opposition — as well as considerable support — leading to a request for a moratorium on new wind farms in the county until county commissioners could gather more information.

To prepare for the decision, some county officials visited a wind farm near Marshall, to see firsthand what the set-backs and sounds and aesthetics would be.

Commissioner Vince Schaefer told the St. Cloud Times that the Marshall turbines were quieter than he expected. But there were only nine on the wind farm visited by the officials, and the Stearns County projects call for more — 40-60 in Paynesville, which is furthest along in planning.

Schaefer said he favored a moratorium, to consider whether greater setbacks are needed. He also wonders about health impacts.

“It’s awfully confusing, the information we’ve gotten so far. It’s from one extreme to the other,” he told the paper. 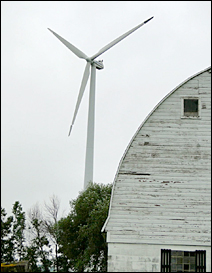 Some living near turbines have complained of annoyance, headaches and sleeplessness, although the low-frequency noise from a wind turbine generally can’t be heard beyond a half mile, the report said. And the report notes that shadow flicker can be eliminated by turbine placement and adequate setbacks.

Finally, the county board voted down the moratorium proposal last week, so Twin Cities-based Geronimo Wind Energy will continue planning on projects in the county near Paynesville, Luxemburg Township, Sauk Centre and Albany.

Citizen concerns
Near Rochester, a group has organized to slow down some of the wind farm developments. Olmsted Wind Truth says its members have “watched private lives interrupted with industrial skylines and threatening health issues.”

They think state officials grant permits too freely, without enough research. And they want greater setbacks from homes and towns “to protect our existing quality of life and for future generations.”

The Dodge County group wants turbines to be at least 1¼ miles from homes, rather than the current 500-foot requirement. Public Utilities Commission staff members have recommended raising that to 1,000 feet. There’s also a sound setback requirement — a 50 decibel limit, which officials say generally is met at about 700-800 feet from a turbine.

We must act NOW before our horizon, serenity, and land is taken from us.

We are fighting to preserve our land and rural disposition so that it may continue to be admirable for generations to come. Our government officials have a responsibility to protect Southern Minnesota by restricting the distance wind turbines can be built from homes.

The Goodhue group raises the issue that the tall turbines could hamper emergency helicopter operations, but Mayo Clinic officials said it hasn’t been a problem.

Shooting the breeze, in town
Wind turbines are popping up in cities, too.

North St. Paul is one of a dozen cities installing turbines to generate power through the Minnesota Municipal Power Association. North St. Paul’s turbine is 80-feet tall, with 35-foot blades. It had problems, though, in the winter, when the lubricating oil turned to gel in the cold temperatures.

Plans for similar municipal turbines have been installed in Buffalo, Le Sueur and Faribault, while plans are in the works in Anoka, Arlington, Brownton, Chaska, East Grand Forks, Olivia, Shakopee and Winthrop.

Mahtomedi, too, recently moved closer to having a turbine in town. The Mahtomedi Area Green Initiative is spearheading the plan to put a 125-foot turbine on land owned by St. Andrew’s Lutheran church. They’ve raised $27,000 of the $75,000 needed. 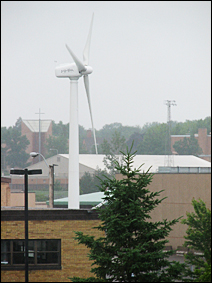 And in Austin, the city council has been struggling with an ordinance that would allow wind energy systems in the city, except in residential areas. They would be allowed in school zones, though. Final approval is still pending.

The answer, my friend …
Wind energy’s future in the state remains bright, Sen. Anderson says, especially when it’s compared to other energy producers.

“When you try to site coal plants or nuclear plants, you face a lot worse issues,” she said.

“Of course, we don’t want to cause devastating issues to neighbors; we’ve got to figure out the right balance. In Europe, there’s a dense population and dense concentration of wind turbines. We don’t want to go down that road.

“No, we don’t want one on every street corner, but if the fights against them intensify, all the wind companies will go to the Dakotas, where there’s lots of wind, but not many people.”

Joe Kimball writes about politics, Greater Minnesota and other subjects.

Despite occasional lulls, wind energy sails ahead in Minnesota