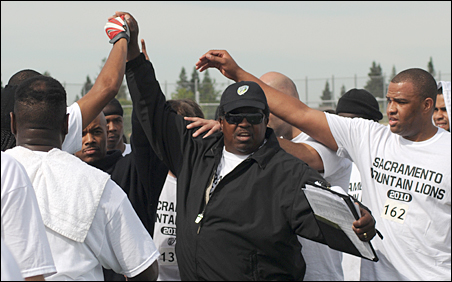 Courtesy of the UFL
Even Dennis Green says he’s surprised to be back coaching, but notes that the Sacramento semi-pro league job is a great fit for him and his family.

SACRAMENTO, CALIF. — NFL fans last paid attention to Dennis Green when they saw him acting like Mount Vesuvius in a polo shirt.

The date: Oct. 16, 2006. The scene: a post-game press conference. The set-up: Green, then coach of the Arizona Cardinals, had just watched his team lose 24-23 to Chicago on “Monday Night Football” after leading by 20 points late in the third quarter. It was a horror-movie defeat, one made grislier by the fact that the Bears offense hadn’t scored a touchdown.

Everyone knows what happened next: A reporter asked a question as Green stood behind a lectern and glowered beneath his Cardinals ball cap. Then … ka-boom. As the coach spewed hot lava for 40 seconds, out came the phrase that gained him more attention than anything else in his decades-long coaching career: “The Bears are who we thought they were!” (Relive the eruption here.)

Of course, long before barking the eight words that later inspired a Coors Light TV ad and a line of T-shirts and caps, Green had achieved notoriety among Vikings fans. Never mind the Bears. Here’s what the Purple faithful don’t want to remember but can’t forget: take a knee, and 41-0. No explanation required.

Green’s tenure in Minnesota ended in early 2002. In 10 seasons, he guided the franchise to a 101-70 overall record, eight postseason berths, four division titles — and those dual face-plants in the 1999 and 2001 NFC title games. His hiring by Arizona in 2004 surprised NFL observers because he hadn’t lobbied for another job. His firing in 2006 surprised no one; the Cardinals had gone 16-32 in his three seasons.

Green surprised himself with a return to coaching
He appeared to have hung up his headset for good — a perception Green himself held. “There’s no way I thought I’d be coaching,” he said. “No way. I’d gone back to San Diego, where my wife and two kids live, and planned on being there.”

The 61-year-old Green talked recently while relaxing in a hotel lobby here, a few days before conducting minicamp for the Sacramento Mountain Lions, the city’s United Football League franchise. Earlier in the week, the team had signed former Minnesota quarterback Daunte Culpepper, creating a small media ripple that likely marked the first time Vikings fans noticed the UFL exists. Or that Green has returned to the sidelines.

Wearing a black polo shirt, matching sweat pants and a watch roughly the size of a pie tin, he looked unchanged from his Vikings days, save for sprinkles of gray in his hair. “But with the schedule we have, I don’t have to worry about working full time and moving away from San Diego, and in the same sense, I get to spend time in the game I love.” 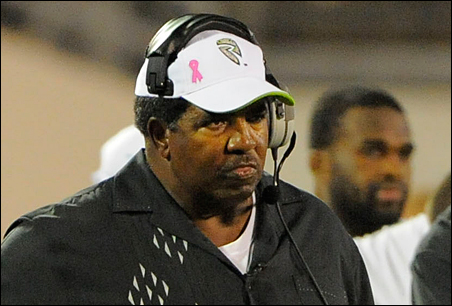 Green joined the franchise as coach and general manager last year for the UFL’s inaugural season. The team, then known as the California Redwoods, played its home games in the Bay Area and averaged under 6,000 fans a game. Seeking better attendance when the new season begins in September, owner Paul Pelosi — aka Mr. Nancy Pelosi — fled a market dominated by the Raiders and 49ers for California’s football-deprived capital city.

Such small crowds would presumably represent a final disgrace for a man who twice led the Vikings to within a game of the Super Bowl. Ever the football evangelist, Green insists otherwise, asserting that his mission remains the same as when he took his first head coaching position in 1981 with Northwestern University: giving players a shot.

“Sometimes I think we make the mistake in football that we only draft the very, very best guys out of the colleges [to play in the NFL], and what happens, we have a lot of other guys who were exceptional college players and never got an opportunity. The UFL provides those guys with opportunities.”

The fledgling semi-pro league consists of five teams (the others are based in Hartford, Las Vegas, Omaha and Orlando) that will play an eight-game regular season. UFL executives project total losses of $15 million, half as much as last year, and hope to break even in 2011. The rosters consist of NFL castoffs (former Packers running back Ahman Green recently signed with Omaha), a smattering of players with the potential to reach the next level and many more who don’t. Until Culpepper’s arrival, Dennis Green ranked as the UFL’s biggest name, along with ex-New York Giants coach Jim Fassel, the coach-GM of the Las Vegas club.

A reunited Green-Culpepper tandem
Culpepper’s presence here may confirm the league’s small-timeness or portend the start of its slow climb out of obscurity. Regardless, Green, whose first-round selection of Culpepper in the 1999 NFL draft drew heavy criticism from Vikings fans, believes the quarterback will prove pessimists wrong, much as he did after becoming Minnesota’s starter a decade ago. Culpepper earned three Pro Bowl trips over the next five seasons.

“He just hasn’t been in the right situation the last few years,” Green said. “It took him two years to get healthy from the knee [injury]. If you look at his 2004 season in Minnesota” — when he threw for 4,717 yards and 39 touchdowns, with only 11 interceptions — “he was as good as any player in the National Football League. As a young guy, at 33 years old, he looks young and fit, and we think he still has some exceptional years ahead of him.”

The reunion of coach and quarterback inevitably rouses memories of the 2001 NFC title game, when Fassel’s Giants scorched the Vikings 41-0. Not surprisingly, Green showed little interest in revisiting the defeat. “You can’t be successful unless you win the championship,” he said. “We had a lot of good players, won a lot of games that year, but unfortunately, we didn’t get to and win the Super Bowl. So you always have some disappointment if you don’t do that.”

Nor did he turn expansive at mention of the 1999 NFC title game, when he directed quarterback Randall Cunningham to take a knee at the end of regulation with Minnesota and Atlanta tied at 27. The Vikings, who scored a then-record 556 points while going 15-1 during the regular season, succumbed in overtime. “We lost a lot of players in that particular game,” Green said. “We missed a field goal” — Gary Anderson’s first botched kick of the season — “and there were other things that happened. I’ve coached a lot of football and you make a lot of decisions. If they go right, then it’s great. If they don’t, it’s not as great.” 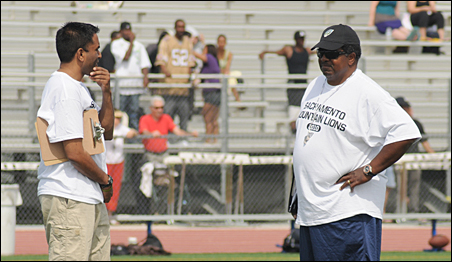 Courtesy of the UFL
Ever the football evangelist, Green insists that his mission remains the same as when he began coaching: giving players a shot.

With one game left in the 2001 season and the team sputtering at 5-10, Red McCombs, the Vikings owner at the time, bought out Green’s contract. His departure occurred a few months after offensive lineman Korey Stringer died of heatstroke during training camp, a subject Green refused to discuss.

“Coaches don’t last very long in the NFL,” he said. “Ten years at Minnesota — that’s a long time.” He still returns now and then to the Twin Cities to visit his in-laws, but he doesn’t track his old team more than any other and offered no opinion on its latest playoff pratfall in January. “I gave it all I had. Very few careers in the NFL end the way you want it to, whether you’re a player or coach. It’s a tough business.”

Minnesota’s hiring of Green in 1992 made him only the third black coach in NFL history. Eleven years earlier, when he accepted the Northwestern job, he gained distinction as the second black coach of a major college football program in NCAA history. He ranks second after Bud Grant for most wins in Vikings history. And though his Arizona teams struggled, he brought in many of the key players — among them Minneapolis native Larry Fitzgerald, Kurt Warner, Darnell Dockett and Karlos Dansby — who helped the Cardinals make their unexpected run to the 2009 Super Bowl.

Yet no matter his past feats and future exploits, Green already knows that, for better or worse, eight words will serve as his career epitaph: “The Bears are who we thought they were!”

Go ahead and laugh. He does.

“After releasing that frustration, my doctor said it was damn good for me. When you’re getting frustrated, you can only deal with it so long. You’ve got to let some steam off somewhere.”

At the very least, it’s more fun than taking a knee.

Martin Kuz, a Minnesota native, is a freelance writer in Sacramento.