MORRIS, Minn. — Nearly every speaker at the symposium in Morris on Thursday talked about personal roots in small-town Minnesota, even those who drove up from the Twin Cities.

But here’s the lament we shared during the breaks: It’s no longer true that everyone living in urban Minnesota has ties to rural Minnesota — has a grandmother or an uncle living on a farm where city kids can learn to collect warm eggs in the chicken coop and watch the miracle of birth in the barn.

Sure, we celebrate our rural cultural heritage at the State Fair every summer. And we indulge our need for a collective memory with the pretense of life in the prairie town of Garrison Keillor’s fantasy.

The truth is, though, that to maintain a cohesive culture and an economy that can thrive statewide, we have to work at it. That’s what drew more than 200 people to University of Minnesota Morris campus for the Symposium on Small Towns & Rural-Urban Gathering.

Century of loss
Everyone there knew the history lesson:

In 1900, two of every three Minnesotans lived in a rural area, most of them on farms.

In 2000, three in four Minnesotans lived in an urban area. And only 3 percent lived on a farm.

Young people led the exodus. And the towns they left behind gradually aged to the point where deaths outnumbered births each year.

The survivors were far more likely to be poor. Minnesota ranked among the nation’s highest income states in 2000 with per-capita earnings of $23,198. Taken alone, though, Minnesota’s rural cities would have ranked near the bottom with a per-capita income of $17,880, according to a report [PDF] by the Center for Small Towns on the Morris campus.

If you are reading this article on a computer in a metro area, you may say “So what?” When I think about the answer, I think about the argument we made over the years for empowering women in the workplace: A society can’t reach its full economic potential if half of its workforce is under-employed.

In the same sense, a state is squandering a good portion of its economic power if one-fourth of its people lack opportunities to thrive.

Spiffing up, fighting and leveraging
The big take-away message from the symposium was that some small cities and towns aren’t sitting back waiting to die.

Some are spiffing up to serve as bedroom communities where workers in regional centers can buy more housing for less money and raise their kids in that idyllic setting of Minnesota Past.

Some see a future in telecommuting, and they are fighting for access to broadband networks that can free up workers to live in scattered locations.

Some are leveraging resources to rebuild everything from cultural amenities to small-scale energy projects to home-grown food markets.

Here are a few of the examples presented at the symposium:

Hoffman rocks
Hoffman, population 672 in 2000, had lost so many businesses that residents had to drive out of town to buy so much as a roll of masking tape and a paint brush. The town, west of Alexandria, learned how deeply it had sunk into poverty after a new skating rink was finished — kids couldn’t afford to buy skates.

Then came Muriel Krusemark to serve as economic development director. With the help of grants, volunteers and every funding gimmick she could find, Krusemark coaxed businesses — from a hardware store to a dog-grooming salon — back to town. An appliance dealer comes one day a week. (“In small towns, things will never be like they used to be,” Krusemark said.)

In the refurbished Main Street Galleria, shoppers can buy hand-made quilts, take guitar lessons or surf the Internet. The baseball field has new grass, local gardeners sell produce at a Wednesday-night market, and a welcome wagon has served fresh cookies to 14 new families.

This too: the Lions Club raised money for ice skates.

Doing the co-op thing
Morris is hardly a small town. But the university city of just under 5,000 residents grapples with some of the same challenges as the small towns it serves in central Minnesota.

One of them was holding on to a local movie theater. In 2007, the owner of the Morris Theatre put the business up for sale. Fearful that the theater would close, a group of citizens took control of their own cinematic needs. They formed a cooperative to purchase and operate the theater.

The Morris Theatre Cooperative is restoring the historic venue that was designed and built by B. J. Benfield in 1940. It brings in two fairly new movies a week and also invites campus and community groups to show international films and classic films. Now showing, according to the theater’s website, are “Furry Vengeance” and “The Back-up Plan.”

The theater is but one creative deployment of the power of working together. Not just for grain and milk, co-ops around the Upper Midwest are serving up everything from health-care delivery to taxi service.

Entrepreneurial immigrants
Some communities are fighting immigrant problems. Others, though, also are leveraging the enthusiasm of immigrants who are eager to start new lives in a new land.

At a session on Latino-filled storefronts around Minnesota, Eduardo Martinez told his story about arriving in Minnesota expecting to practice the profession in which he holds a master’s degree: veterinary medicine.

Like many professional immigrants, Martinez ran into red tape, and he couldn’t find work. With a family to feed, he grabbed a job at McDonalds paying $4.25 an hour. He parlayed that position into a Taco Bell management job — and eventually into buying Mexican Village Too Restaurant in St. Cloud.

Roberto Valdez Jr. of the Willmar Area Multicultural Market said immigrants represent a largely untapped economic resource for Minnesota because “they are risk takers by nature,” and that’s an essential quality for an entrepreneur. They also abound in other essential qualities: vision and ambition.

His job as the market’s coordinator is to bring them reality too: “I start out by saying this is the land of 10,000 laws.”

“They already know how to make the best enchiladas in town,” Valdez said. “What they need is a marketing plan, a business plan.”

Among other services, the Willmar market operates a commercial kitchen where aspiring restaurant owners can learn food-service basics. It also operates a retail incubator.

“There is the passion, there is the drive,” Valdez said. “All we need is a little push sometimes.”

Politicians weigh in
Symposium organizers invited Minnesota’s gubernatorial candidates to sit for a discussion on the question of “how public policies are improving rural small-town viability.” 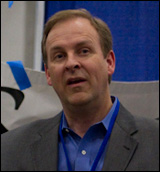 Two candidates showed up: DFLer Matt Entenza and Jim Mulder, who is running for lieutenant governor on the Independence Party ticket. (Attendees told me that DFLer Margaret Anderson Kelliher also had stopped in for a pre-symposium event.)

In keeping with the spirit of the symposium, Entenza started by saying he’s from Worthington (population 11,000). Mulder said he grew up on a farm near Renville (population 1,323).

Entenza, a former state legislator who now lives in St. Paul, said state policy makers too often overlook the small-scale developments that could sustain rural towns: “It’s easier to get a $30 million loan guarantee from the state than a $3,000 one.”

In particular, state leaders have failed to promote local energy projects, Entenza said. He pledged to work “with our federal partners” to finance a clean energy economy in Greater Minnesota.

Mulder, former executive director of the Association of Minnesota Counties who now lives in Roseville, said elected leaders have tended to pass laws that “seem to make great sense in St. Paul but seldom make sense in rural Minnesota.” Take water issues. Seven different agencies are responsible for decisions about wetlands, and thus the permitting process for business developments can take years. A Horner-Mulder administration would streamline the laws and also consider eliminating sales taxes for certain capital investment projects, he said.

Asked about recent cuts in local government aid, Entenza said that under Republican Gov. Tim Pawlenty “rural communities have been kicked in the teeth again and again.” Wealthy cities like Edina have not suffered as much as poor rural communities, he said.

Entenza emphasized that “throwing the problem back in the face of counties and cities” is going to deepen poverty in areas that already are strapped to deliver basic services.

“To solve the budget deficit, we are going to have to increase revenue,” Entenza said, and that should “be done on income earners at the top levels.”

Mulder said existing aid formulas are based on an expectation of growth, and when growth doesn’t happen, “cities and counties get thrown over the cliff.” Every citizen of Minnesota should have a right to public safety, fire protection and clean water, he said. But it doesn’t make sense for cities and counties to send sales tax revenues to St. Paul in order for the state to send money back to them. 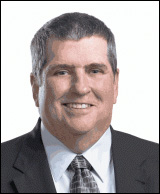 For starters, Mulder said, counties should be able to increase sales taxes by ½ a percent and keep the money for their own needs. Property taxes would decrease as a result, he said.

That would be only the beginning of a process that he acknowledged “is going to be painful,” considering the state’s budget problems.

Entenza said in closing: “Every town under about 3,000 around Worthington is now pretty much a shell — beauty shop is gone, grocery store is gone, hardware store is gone…. I am looking at what have now become regional centers, places like Morris. I don’t want to wake up and find they are going to go too and that’s what’s starting to happen….There are some folks who think that that’s just fine — that all of our little towns are destined to go, that we will be left with a couple of regional centers like a St. Cloud or a Rochester, and we will become sort of like eastern Kansas or Oklahoma with just big 20,000 acre farms.

“I don’t believe that is right. But that’s what’s going to happen unless we work together, unless we have some leadership that believes that small towns are supposed to be there. And I think that they are.”