In a time of giants in Minnesota — Humphrey, Freeman, McCarthy, Mondale — none was bigger than Gerald Heaney. 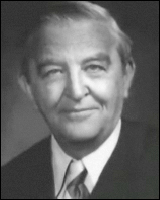 “He wasn’t just a good judge, he was a great judge,” said Heaney’s longtime friend Walter Mondale. “I always tell people he should have been on the Supreme Court.”

Heaney, who died at the age of 92 Tuesday in Duluth, may not have made it to the Supreme Court, but his impact as a member of the 8th Circuit U.S. Court of Appeals still is felt in St. Louis, Omaha and Little Rock, where his school desegregation rulings opened doors for black children.

A remarkable man
But those 40 years on the federal bench — a period in which he participated in more than 3,000 cases — are only a small part of the story of a remarkable man.

Before being placed on the court by President Lyndon Johnson in 1966, Heaney, the labor lawyer from Duluth, was named to the University of Minnesota’s Board of Regents.

Mondale laughs when he recalls the reaction to that.

“I can’t remember who it was, but somebody said, ‘You can’t make Heaney a regent. The first thing he’ll do is move the whole University campus to Duluth.’ ”

Indeed up to his dying day, Heaney followed the growth of the UMD campus closely.

And there was more than that because Heaney always thought big and fought hard for what he believed in.

“One of the truly remarkable Minnesotans of our time,” said Mondale. “You think about it. Here was this poor kid from Goodhue, Minn., and he grew up to accomplish so much. He truly represents what Brokaw calls ‘the Greatest Generation.’ ”

Mondale reflects on leadership qualities
Do we still produce giants like Heaney and the people around him?

“I wonder about that sometimes,” Mondale said. “I think there are two things you need to consider. One, young leaders never look like giants. Second, there was something special about that generation of returning vets. They had seen the most horrific things you can imagine and they came back, committed to making a better world.”

Certainly, Heaney saw the horrific sights. He joined the Army — the Marines had turned him down because he was colorblind — following graduation from law school in 1941. He was a 2nd lieutenant with the 2nd Ranger Battalion on D-Day. His outfit was to take out four German pillboxes atop rocky cliffs at the far end of Omaha beach.

In a story he recounted to U.S. Rep. James Oberstar, he soon found himself in charge.

Men, laden with heavy packs, drown. Others were shot down. But Heaney and survivors waded ashore and used their bayonets as footholds to climb the cliffs and ultimately prevailed. The 2nd lieutenant was awarded the Silver Star for his heroism.

He rose to the rank of captain and fought across Europe, earning a Bronze Star for his actions and was on hand at a point that is now a portion of the Czech Republic when the Germans surrendered to U.S., British and Soviet troops. There was to be a flag-raising ceremony, but Heaney discovered no American flag was available. He went into a village, found pieces of red, white and blue cloth, and local seamstresses created a flag that now can be found in Duluth.

“There’s a story,” said Mondale. “The war was over, he wanted to go home. He went to regimental headquarters and Patton was there. Patton sees this young captain and says, ‘What do you want?’ Heaney tells him. Patton asks, ‘Where have you fought?’ Heaney lists all the places he’d fought and Patton says, ‘Give this young man whatever he wants.’ ”

He went to Duluth, married and raised a family, won huge labor cases and was a key member of the inner circle of what would become the liberal-dominated DFL.

Heaney had hand in political victories
It was the people in his inner circle — Orville Freeman, also a war hero who had befriended Heaney at law school, Hubert Humphrey, Eugene McCarthy and, a few years later, Mondale — who would win high political office and name recognition. But Heaney had a hand in all their victories.

It was Heaney’s hand in helping McCarthy win a U.S. Senate seat in 1959, Mondale believes, that may have been the most significant political work of Heaney’s life. McCarthy was a Roman Catholic. 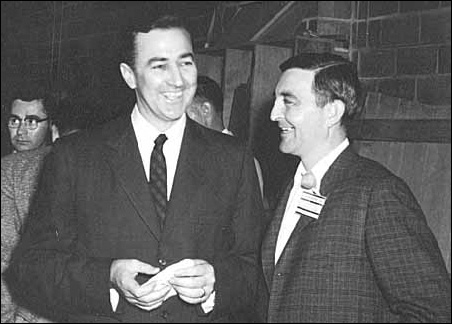 Courtesy of the Minnesota Historical Society
Eugene McCarthy and Gerald Heaney shown in a 1958 photo.

“At the time, there was tremendous bias against Catholics,” said Mondale. “When McCarthy won, it helped show Kennedy how to win.”

In fact, after Heaney worked for Humphrey in his losing 1960 race for the Democratic presidential nomination against Kennedy, Heaney worked hard in the 8th Congressional District on behalf of Kennedy. Kennedy won in the 8th by 50,000 votes. This was vital because JFK ended up carrying Minnesota by just 22,000 votes over Richard Nixon.

His influence on the bench declined following the election of Ronald Reagan as president as more and more conservatives were added to the bench.

But in real terms, Heaney already had made his lasting mark on the U.S. culture.

“I have known Gerald Heaney for at least 45 years,” Oberstar said in a statement. “I’ve seen him in every imaginable situation dealing with people one on one and in large groups. I didn’t observe him in the courtroom, but I read his decisions, and what I can say of Gerald Heaney is that he had no equal in the law, he had no peer in his quest for equal justice under the law and his zest for intellectual combat for the causes of the neediest among us, his grand strategy, view of the needs of the people of Duluth, indeed all of the people of Northeast Minnesota, were unparalleled.”

In a time of Minnesota giants, none stood taller than Judge Heaney