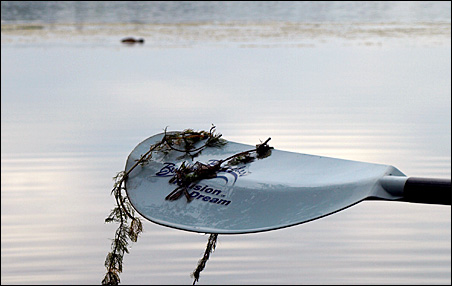 One thing could be worse than swimming tangled in Eurasian watermilfoil: getting sucked into controversy surrounding the clingy weed that has invaded 235 of Minnesota’s lakes and streams.

From Winona to the Iron Range, Minnesotans who love their lakes are frustrated — and, in many cases, fighting — over how to live with milfoil.

Bass anglers love it. Water skiers curse it. Fish take cover in it. Native plants give way to it. And one tiny beetle attacks it.

More than 20 years after milfoil’s invasion, Minnesota is nowhere near consensus on what to do about it.

On Lake Minnetonka, where milfoil first was detected in 1987, residents have forked over hundreds of thousands of their own dollars to treat bays and private beaches with herbicides that curb milfoil. And they’re begging the DNR for permission to treat more of the lake.

But in Minneapolis and many other places, the option of sinking herbicides into a lake is all but off the table.

Experts and policymakers can’t even agree on its impact. Some say it benefits lakes. Others insist it is an unmitigated menace.

Some benefits for a lake
You wouldn’t know it from talking to sailors clearing weeds from their centerboards on Lake Calhoun, but milfoil actually can benefit a lake, said Michael P. Schmidt, general manager for the Minneapolis Park and Recreation Board.

“It provides a place for the little fishies to hide so they grow up to be big fishies,” Schmidt said. “Its root system holds the bottom in place, which holds phosphorus in place too. … It makes the water clearer, which is a sign of better water quality.”

Before you milfoil haters start frothing, you should know that Schmidt quickly added this: “Aesthetically it is smelly and ugly … devastating in the shallow areas to surface recreation.” 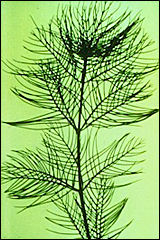 Courtesy of the Minnesota DNR

Like so many charged with managing Minnesota’s waters, Schmidt’s team is looking for an elusive balance — trying to control milfoil just enough to satisfy people who want to use the lakes for swimming, paddling and sailing.

Of course, there are budgets to balance too. Minneapolis is on pace to spend about $140,000 fighting milfoil this year, Schmidt said.

And so, it made sense to try doing nothing this year on Lake of the Isles, where there are no beaches — it made sense, that is, until kayak paddles were sticking in thick mats of milfoil and angry residents were calling park commissioners.

“We knew there would be some support for it and some pushback,” Schmidt said. “As things developed, as we looked at the situation and the impact it was having on the surface recreation, we modified our plan. The pushback helped us realize it.”

The city hired a harvesting machine to clear paths in the lake.

Harboring fish, crowding out native plants
What about the view, though, that doing nothing can be a good choice? I asked University of Minnesota Professor Raymond Newman, who has done extensive research on milfoil.

There’s no question that plants provide important habitat for fish, turtles and other lake life, Newman said. But the plants don’t have to be milfoil.

Some anglers swear there are more fish, especially bass, in milfoil-infested lakes. But what’s probably going on is that anglers have learned how to fish milfoil beds with great results, Newman said.

“They end up catching more fish than they would without milfoil — not necessarily because there are more fish but because the anglers can find them in the milfoil beds,” he said.

The more fundamental ecological question is whether Eurasian milfoil crowds out native plants that were providing fish habitat long before this aggressive new species got loose in the lakes.

“Most lakes that have a dense nuisance population of milfoil have a reduced abundance of native plants,” Newman said.

If you were to count each species in a given lake, the number probably didn’t drop much, he said, but there likely would be fewer plants representing the native species.

Typically milfoil will take over a zone beginning about 5 feet offshore and extending to the point where the lake depth drops to 15 feet or deeper, said Chip Welling who coordinates the Minnesota DNR’s Eurasian Watermilfoil Program.

“It certainly is not desirable,” Welling said. “We wish it wasn’t there. We would rather have native plants.”

Herbicides
Herbicides define the front line in the milfoil wars. And the battle to watch is on Lake Minnetonka.

The DNR generally does not allow lake-wide or bay-wide treatment with herbicides. But after 20 years of frustration, Minnetonka residents won approval for a five-year demonstration project allowing them to treat three bays — Gray’s, Phelps and Carman — with chemicals.

The treatments began in 2008, mostly with Triclopyr, which the National Pesticide Information Center says [PDF] is low in toxicity. You may have used it on your lawn to kill Creeping Charlie.

Courtesy of the Minnesota DNR

“There are small areas of re-growth, but Gray’s Bay is substantially free of milfoil,” he said. “The strategy now is to keep watching and each season do spot treatments as needed.”

Carman bay residents skipped a year in the program, and this year’s treatment may not have been timed just right. For whatever reason, that bay had more milfoil than the other two.

Meanwhile, property owners along St. Albans and Gideon’s bays took note of the success on Gray’s Bay. They wanted it too — wanted it enough to chip in tens of thousands of dollars of their own money to pay for the treatment.

But the DNR said no.

A decrease in some plant species
“In Gray’s Bay we saw a decrease in the frequency of a few plant species,” Welling said. “We want to have a better idea of whether that is a temporary decrease or indicative of something we might see more of in the future. … We are treating the bay again this year and monitoring it. We will see what we get. “

The upshot is that residents of the three original bays can continue the bay-wide treatments for the duration of the five-year project while their neighbors watch with envy. Property owners on the untreated bays can apply for permits to spread herbicides in small areas around their docks and private beaches. But they can’t treat their whole bays.

Not fair, says Rob Roy, who lives on St. Albans.

Milfoil is bad for property values, he said: “If you can’t swim on your beach because of weeds, it makes a big difference.” Further, he said, it endangers water skiers who’ve been forced to crowd into smaller sections of the bay.

“There’s a lot of politics involved in this,” Roy said.

Among other issues, he suspects the DNR is favoring the bass fishing crowd in a mistaken impression the milfoil has benefited the bass.

Osgood at the Lake Minnetonka Association said he respects the DNR’s determination not to harm native plant species. But milfoil was harming the native species too, he says.

“No one wants to hurt the lake,” Osgood said. “Where we disagree is over the question of how you balance the fact that milfoil left untreated does damage to other plant species.”

Minnesota is not Michigan
Osgood points to states, like Michigan, where herbicides have effectively kept milfoil under control in hundreds of lakes for years.

“This is Minnesota. That is Michigan,” said Welling at the DNR. “We have a different regulatory framework.”

Minnesota is more cautious, for good reason, he said. Water lilies and other plants suffered seriously the first time the state tried using herbicides — in a lake in Anoka County.

Michigan isn’t the only state that takes a more liberal approach to herbicides, Welling said. Illinois, Florida, Washington and several other states also allow them to be deployed more freely against milfoil. Then again, some other states, especially in the Northeast, are more conservative, he said.

Newman, the U of M scientist, said herbicides probably are “the most efficient and effective” method of controlling milfoil when used properly. But that’s the catch. Everything from weather to water depth to currents can get in the way of proper use.

“If you don’t do things just right, you end up not killing the plants,” he said.

As for the DNR’s concern about killing native plants too, he said that can be a tricky matter of juggling several variables including the dose of the herbicide.

“The ideal situation is to use a lower dose,” Newman said. “But you can end up not killing anything. Then if you use a higher dose you can kill too much”

Weevils to the rescue?
Milfoil has a natural enemy — a tiny beetle that bores into the plant’s stems, deposits eggs and gives rise to larvae that bore more holes until the plant eventually dies.

These milfoil weevils have long gone after native milfoil. They don’t seem to bother much of anything else. And they love Eurasian milfoil. Indeed, they are keeping it in check in a few Minnesota lakes.

There’s a catch, though. Sunfish devour the weevils.

When University of Minnesota scientists experimented with weevils in Cedar Lake in 2007, “panfish loved the program,” said Schmidt of the Minneapolis park board. “Our weevils kept disappearing,” he said.

Still, several other states are having some success with weevils. The company providing them — Ohio-based EnviroScience Inc. — has proposed to work in Minnesota.

But the DNR says the company must use only milfoil and weevils that are found in Minnesota. Those from other states might differ subtly but significantly from their Minnesota counterparts. The last thing we need is yet another invader.

“The company has declined to meet those requirements … so they are not working here,” Welling said.

They come with downsides too.

The mowers can scoop up bugs and other small critters that hang out in the milfoil, so clear-cutting a whole lake isn’t wise. Nor would it be cheap. Instead, mowing typically is used to open boating channels and strips around beaches.

And the mowing cuts loose a mess of milfoil chunks that cling to swimmers’ bodies, litter shorelines and also provide more milfoil fragments to take root in the lake.

Still, mechanical harvesting remains the option of choice for most recreational lakes.

Minneapolis, which has been loath to put chemicals in its lakes, is set to review its milfoil policies, said Schmidt at the park board. The staff expects to recommend continued harvesting.

“Within the limitations of the budget, we believe that harvesting should continue on a limited basis, that we have struck a balance here,” he said.

Milfoil: Bass anglers love it, water skiers curse it, Minnesotans fight over how to deal with it