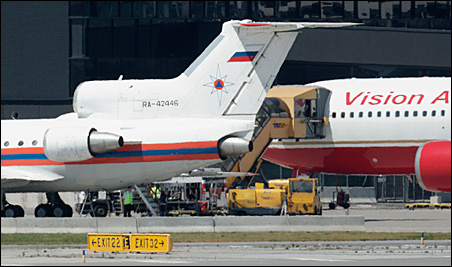 REUTERS/Heinz-Peter Bader
Russian and U.S. aircraft stand on the tarmac in front of the Skylink terminal building, during an exchange of spies, at Vienna Airport on Friday.

The Russian spy scandal ended last week as ridiculously as it started. The Russian tabloids are now running gossip on the femme fatale of the story, Anna Chapman, sharing with the Russian audience her sexual exploits and especially her enjoyment of sex toys.

Then, just when an orderly spy swap put the semblance of some competence to the story, Joe Biden went on “The Tonight Show” with Jay Leno to say he wishes we had kept Ms. Chapman. Deportment has been rather poor on both sides of this spy story.

It’s hard to make sense out of this summer’s Russian spy scandal.

Why would the Russians devote such expense and organization to embedding sleeper agents in the United States whose mission was to blend into ordinary American society and then ask them to obtain what was for the most part public and easily accessible information?

Consider two assignments, for example. They were asked to gather information on Obama’s election or his plans for his trip to Moscow a year ago. Jon Stewart was right on this one. They could have easily obtained the information by subscribing to The New York Times.

In Moscow, the press is asking how could the SVR (the successor to the KGB’s foreign intelligence operations) have deployed such “laughable amateurs.” In the glory days of the Cold War, KGB agents typically were fluent in a half dozen foreign languages and took special pride in their ability to speak perfect English and even add the correct American, British or other accent when needed. I know one ex-KGB veteran who is particularly proud of his ability to talk Texan.

This new batch didn’t bother to cover up their accents. Richard and Cynthia Murphy (Vladimir and Lydia Guryev) of Montclair, N. J., explained their accents to their neighbors by claiming to have come from Belgium. Tracy Lee Ann Foley (Elena Vavilova), embedded in Cambridge, Mass., said she was originally French-Canadian. (A Russian accent in English has little in common with a Flemish or French accent.)

Violated procedures
The sleeper cells routinely violated standard operating procedures. As if to make eavesdropping as convenient as possible for the FBI, the Russian sleepers made frequent and direct contact with Russian Embassy and Consular officials. Enough has already been said about their loyalty to antiquated methods — invisible ink, information drops while passing in train stations, or, my favorite, their code for greeting one another: “Excuse me, haven’t we met in California?” “No, actually, we met in the Hamptons.” Even their computer and wireless communication was fairly standard off-the-shelf technology.

Then, of course, there’s Anna Chapman. A spy is not supposed to attract attention. While working as a sleeper agent, the 28-year-old redheaded bombshell posted on the Russian equivalent of Facebook (Odnoklassniki) a tempting photo album of herself in poses clothed and not so clothed.

This is the stuff comic monologues are made of. Or think again. It brings to my mind one of my favorite lines from Arthur Conan Doyle. In the initial investigation of a case, Holmes turns to his companion Watson and says, “Watson, there are too many clues.”

Most, if not all of them, in this spy case probably fall in the category of what the espionage world calls “witchcraft.” It refers to the planting of information that is compelling, either partially valid or lacking a key element, and, above all else, designed to distract the other side from deciphering the actual mission.

Selling protection
Instead of laughing or searching on Google for photos of Anna Chapman, follow the money. In the mid-to-late 1990s, the word on the street in Moscow was that the heir of the KGB, the FSB, went into business. It sold its services as what Russian businessmen call “a roof.” Tony Soprano could easily explain how the system works. In Russia, the “roof” sells “protection” from criminals and avaricious government officials. Soon, the FSB had expanded its operations. From 2000 to 2006, former high-ranking officials of the FSB were linked to major corruption scandals involving the use of businesses as fronts for money laundering, smuggling and kickbacks. In one scandal involving Aeroflot airlines, the ex-FSB official had close personal ties to then President (and former FSB head) Vladimir Putin.

This business plan for the FSB would have been conceived about the same time that someone in Moscow conceived the plan to embed the Russia sleeper cells in the United States. Russian agents thus ended up in the U.S. holding degrees in business and public administration and working in management consulting, financial services and real estate. Anna Chapman, whose life in London included a brief marriage, a divorce, a salacious social life, but little or no money, moved to New York in 2005 and was soon funneling millions of dollars into real estate investment.

The last laugh is not yet in. This summer’s Russian spy story had to be a cover for another story. Based on the past history of Russian/U.S. espionage, we will have to be patient and wait 10 or more years from now until a defector publishes his memoirs and tells the real story.

I have a hunch as to who that future author might be — sometimes a diplomat or a journalist, a close associate of Putin, and a lifetime veteran of KGB and its successor, the FSB — Vasily Kushchenko. He also just happens to be Anna Chapman’s father.