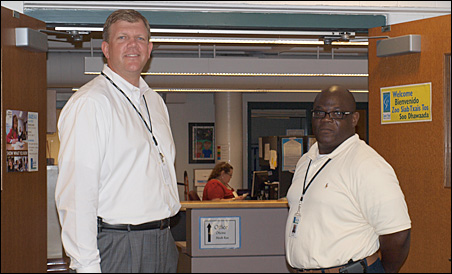 Times were when remarks like the ones coming out of Lisa Goulet’s mouth would have gotten her drummed out of her union, if not keelhauled by a cadre of irate peers.

Goulet teaches first grade at Dayton’s Bluff Elementary on St. Paul’s East Side, an impoverished school that was failing a few short years ago but now posts test results that outpace state averages.

The school’s success just earned its principal a promotion, to direct the district’s school turnaround efforts, and Goulet has a few thoughts on where he should start overhauling other failing programs:

“First, put in a principal who will hold teachers accountable,” she said.

“I know, it’s a scary word because you never know who’s going to be holding you accountable,” said Goulet.

Until June 1, that person was Andrew Collins, who could easily serve as “the poster principal” for the potential of school turnaround, a controversial plank of the Obama administration’s education reform initiatives. As director of Turnaround Schools for St. Paul Public Schools, Collins will have the job of getting others to replicate his success.

Under his leadership, the school consistently posted test scores above state averages despite the reality that virtually all of its students live in poverty. In 2001, just one-fourth of Dayton’s Bluff’s students earned passing scores on state reading tests, and only 19 percent in math. This year, 69 percent were deemed proficient readers and 75 percent in math.

Under Obama, the U.S. Department of Education has set aside $3.5 billion to overhaul schools that underperform year after year. The money, which is administered by the states, must be used for one of four types of “turnarounds”: Districts can turn a failing school into a charter; institute a number of reforms, including longer days and new curriculum; close the school outright; or try the model employed at Dayton’s Bluff, where a new principal is brought in to oversee the replacement of most of the teaching staff.

Sometimes referred to as a “fresh start,” the last approach isn’t new, but it is controversial.

Education policymakers argue that success stories like Dayton’s Bluff’s justify its expansion to the lowest-performing schools nationwide. Critics counter that charismatic leaders don’t grow on trees, making it hard for the model to be “scaled-up.”

The “school turnaround” model has met with staunch resistance in small and rural districts, which face several barriers, including a lack of a big enough pool of educators to hire and fire large portions of a school’s staff. Butterfield, Minn., recently turned down state turnaround money because it would not have made up for the cost of additional busing needed to accommodate a longer school day.

Nor does a fresh start guarantee success. Several Minneapolis schools have undergone wholesale restructuring and re-staffing in recent years yet still haven’t enjoyed much academic progress.

Strictly speaking, Collins didn’t turn Dayton’s Bluff around. In 2001, the school, located in a struggling neighborhood just east of downtown, had an effective principal but was clearly stuck, according to Kent Pekel, who served as chief of staff for former St. Paul Superintendent Pat Harvey and as head of research and development.

School turnaround hadn’t yet become part of the vernacular, according to Pekel, who now directs the University of Minnesota’s College Readiness Consortium, which coordinates a lauded leadership development program for principals. A clause in the district’s teacher contract specified that whenever days were added to the contract — a clear advantage in terms of pay — the affected jobs had to be reposted.

Harvey hired a new principal, who invited teachers to reapply for their jobs. Only a third returned.

One key: getting everyone on the same page
Those that did — and the newcomers who joined them — had to agree to participate in intensive training and to spend two additional weeks per year on the job. All learned Responsive Classroom techniques for creating safe classroom environments. In exchange, the teachers got extra pay.

They also got the benefit of Dayton’s Bluff’s status as an Achievement Plus school. A 13-year-old joint venture between SPPS and the Wilder Foundation, Achievement Plus brings a host of family and health care services into the school building.

At the time, Collins worked for Wilder, coordinating the Dayton’s Bluff program. In addition to after-school programming that’s aligned with the school day, students and their families have access to on-site medical, dental and mental health care, and help with such issues as housing and employment. A preschool program aims to have more kids ready for kindergarten.

Collins spent 2004 working for the district as an intern as part of an alternative path to licensure as a principal. When he took over the school in 2005, he inherited a unified staff who knew and liked him, and students whose test scores were inching up.

That taste of success — and the trust it engendered for both principal and teachers — took the charge out of the notion of accountability, according to Goulet, who was one of the teachers who asked to stay on after the fresh start.

“When everyone is held accountable for high standards — kids, teachers, the principal — it works for everyone,” she said. “The really hard part is you have to get teacher buy-in and you have to get staff to want to do everything you want them to do.”

In Collins’ view, the way to do that is to start frank two-way conversations while letting teachers know they are trusted. “That let staff be honest about how they were achieving their goals,” he said.

Before, poor test scores sent teachers running for cover. But a new staff with everyone marching in the same direction was able to use the data to figure out where supposedly tried-and-true instructional methods were failing.

When gaps were identified, the principal was quick to offer support, said Goulet. Teachers can call for help with behavior issues, for instance, rather than having to stop class to deal with a struggling student.

“Kids don’t end of up in the office as often because we’re all on the same page,” said Goulet.

“A lot of it was teacher input,” added Tim Simmons, who teaches fifth grade at the school. “A lot of what [Collins had] thought changed as he heard what teachers had to say.”

Collins wants to individualize schools’ ‘success formulas’
Possessed of sandy hair and a low voice, Collins is big enough to be mistaken for a linebacker. As he walks through the halls at Dayton’s Bluff, summer school pupils rush to embrace him, and end up hugging a thigh.

Collins is beloved, that much is certain. But can he — or any other veteran turnaround principal — do for numerous schools what he did for one?

Because Humboldt Senior High and Maxfield Magnet Elementary are among Minnesota’s 30 lowest-performing schools, St. Paul is in line to get a slice of the $34 million in turnaround funds the state is getting from the U.S. Department of Education. Districts that want the grants, technically part of Obama’s economic stimulus package, must create school turnaround offices.

Collins was new Superintendent Valeria Silva’s clear favorite to head St. Paul’s office. “He has done it with our own students, in our own system with the same obstacles, barriers and challenges as everyone else,” she said.

“He’s very direct, very focused,” she added. “He has the ability to listen. He sets the course, and he expects his staff to follow it.”

In addition to the two schools designated as failing, Silva placed Collins in charge of transforming a number of St. Paul schools whose test scores put them in danger of making the list soon, as well as the three Achievement Plus schools that participate in the partnership with Wilder.

“We know we have pockets of exceptional teaching and learning,” said Silva. “We need to work to see why those schools and those students are being successful.”

Collins will direct turnaround efforts, but choosing the model that’s right for each school has to be an individual decision, she said. “Culture is one of the hardest things to change,” said Silva. “You build that in people. It’s something each principal works for. Everyone’s style is different.”

The University of Minnesota’s Pekel agreed. “In other parts of the country, some have assumed great leaders can go in and do the exact same thing they did before in a new school,” he said.

There are a small number of “genuine turnaround artists,” he opined, such as Minneapolis principal Donna Grant, who has turned around two or three schools. But by and large, “leaders are not clone-able.”

Still, “Replicating successes and strategies among leaders is something that shows promise, and we don’t do enough of it,” he said.

For a while, what Collins intends to do is listen to principals and teachers at the schools in his new portfolio. “I’m the expert on Dayton’s Bluff,” he explained. “They’re the principal of that building, and they’re the expert there.”

A different approach for principal Flucas
The new expert at Dayton’s Bluff?

That would be Steven Flucas, who was assistant principal at Linwood-Monroe Arts Plus. Before its consolidation with Linwood several years ago, Monroe was arguably the worst school in the district, Flucas said. During his time there, the climate changed radically and test scores rose sharply.

In addition to new staff, “We brought in an attitude that said failure is not an option,” Flucas said. “Within two years, we turned that school around.”

Dayton’s Bluff won’t require an overhaul, so Flucas’ approach to taking over as principal will be different this time. Quoting leadership guru Steven Covey, he said he plans to “Seek first to understand and then to be understood.”

Even if their new leader didn’t come with such solid bona fides, staff at Dayton’s Bluff aren’t worried. Turnover is rare, but nine years after the turnaround, it’s easy for a stable core group of teachers to help newcomers assimilate.

And get used to hearing accountability as a benefit and not a threat. “Teachers like me who do their job don’t care about tenure and don’t worry about that accountability word,” said Goulet.

“We were set up for success,” she concluded. “I would have all those schools that are failing turned around the way we were.”