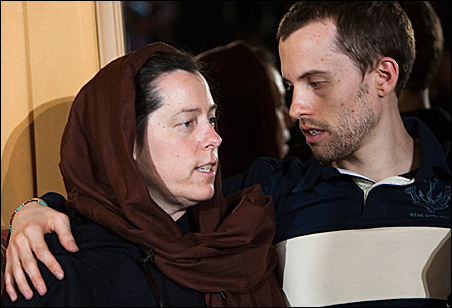 REUTERS/Raheb Homavandi
Shane Bauer talks to his mother, Cindy Hickey, during a news conference in May.

If it is true that the Iranian scientist who undefected last week was a double agent, that is not good news for the American hikers who have been jailed almost a year in Iran.

After a bizarre string of incidents, Washington allowed Iranian scientist Shahram Amiri to fly to his homeland last week, then renewed calls for Tehran to release three hikers — including Minnesotan Shane Bauer.

American officials didn’t talk in terms of a swap akin to the recent U.S.-Russian exchange of spies. Yet the idea was there. Somewhere in murky back channels, the two nations must be carving out a deal.

But nothing is straightforward in the tense cloak-and-dagger drama that passes for relations between Iran and the United States. Baffled over the intersection of these two puzzling cases, I turned to experts on Iran — William Beeman, who chairs the anthropology department at the University of Minnesota, and Cyrus Bina, a distinguished professor of economics and management at the University of Minnesota Morris.

Hikers’ freedom overdue
Their quick take is that Amiri’s return to Iran isn’t connected with any deal. His odd case has been an embarrassment for the CIA — not something that would stir conciliatory feelings in Tehran but rather something Iranian officials can use the taunt the United States.

That would be especially true if Amiri was a double agent — neither a defector (Washington’s story) nor a prisoner (Tehran’s story). Indeed, some experts hold that he was planted by Tehran in a bid to dupe the CIA.

Even so, Bauer and his friends could be released soon; they’ve been held longer than is usual in cases of the arrests of westerners in Iran.

“The pattern in the past has been to hold someone for about six months, and this is well beyond that time,” said Beeman who is set to travel to a conference in Iran this week. “It should have happened by now, and I have no good explanation for why it hasn’t.”

Before diving into the details, let’s look at the two cases in brief.

The American hikers
Bauer and his friends — Joshua Fattal and Sarah Shourd — were arrested by Iranian security forces last July 31 while they were hiking near the Iraq-Iran border. The three, all graduates of the University of California Berkeley, have been accused of spying for the United States and held in Iran’s Evin prison near Tehran. But they haven’t been formally charged with any crime.

The Nation reported last month that Iranians snatched the hikers from Iraqi territory. But the U.S. State Department has not picked up that claim in its public calls for the hikers’ to be set free. And most accounts in the hikers’ defense hold that they had strayed accidentally across an unmarked border into Iran.

As innocent as that mistake may seem, Americans should not underestimate its seriousness, Beeman said. In effect, it means that the three hikers were caught in politically tense Iran without visas.

To put their situation in perspective, Beeman points to fervor in the United States for cracking down on people who slip into the country illegally. While most of those caught are sent back where they came from, some sit in jail while their cases drag on for months.

“It is very hard for the United States to say right now that Iran is not justified in holding people who came across the border without documents,” Beeman said.

The Iranian scientist
While in Saudi Arabia for the hajj in June 2009, Amiri mysteriously disappeared and later surfaced in Arizona. Tehran said he was drugged, kidnapped, hauled to the United States and interrogated — even, tortured — for information about Iran’s nuclear program.

Washington said he had defected.

For his part, Amiri corroborated both stories in a strange series of dueling videos on YouTube. You can see them here and here. Then, last week, he suddenly showed up at the Iranian interest section of Pakistan’s embassy in Washington looking for a flight home.

By one account, Amiri, 32, was lonesome for his wife and 7-year-old son in Iran and concerned for their safety.

Upon arrival in Iran, he was given a hero’s welcome then rushed into questioning by Iranian defense officials.

Meanwhile, CIA officials told the Washington Post and other news organizations that Amiri had been working secretly for the U.S. spy agency while he was in Iran.

The CIA
Isn’t it strange that the CIA would tattle on someone who spied for the United States? Everyone knows he could face terrible consequences if Tehran buys the CIA’s claims.

Maybe the spy agency was finished with Amiri. But that’s hardly the way to recruit others to an ultra-risky cause.

It’s the CIA’s odd handling of several aspects of the Amiri case that makes both Bina and Beeman skeptical that Tehran would feel beholden to release the hikers in return for the scientist’s freedom. 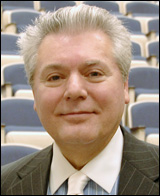 If there was a defection attempt, the CIA botched it, Bina said. For one thing, it was a given that a young Iranian father would have second thoughts about leaving his family behind.

The Washington Post reported Sunday that Amiri and another CIA informant were whisked out of the country because Tehran was growing suspicious about them.

Still, that was a short-sighted fix that was sure to backfire.

“Of course he had a change of heart,” said Bina who is from Iran. “In a defector case, one has to arrange for the immediate family.”

Further, the CIA overstated the value of whatever information Amiri had to share, Bina said. News articles routinely refer to Amiri as a “nuclear scientist,” but his expertise is in radioactive isotopes for medical uses.

So the CIA has been embarrassed by this incident, and Iranian officials know it, Bina said.

At a minimum, it bought into collecting dubious information from a young scientist who had little connection with Iran’s nuclear program. And it bungled the now-aborted defection.

Double agent?
The extent of the CIA’s embarrassment grows monumentally by one line of analysis that intrigued Beeman.

Amiri could have been a double agent. Further, and even more embarrassing for the CIA, he could have been planted by Iran in the first place to dupe the U.S. spies. (You can read more about this view on PBS “Frontline,” in the UK’s Sunday Telegraph, and in the Jerusalem Post.)

Under that theory, Amiri’s willingness to return to his homeland makes more sense, Beeman said. The fake-defection scenario is the only one in which he would not face terrible consequences back in Iran.

And the CIA’s claims about his defection seem more outrageous.

Back in Iran, Amiri appeared on state television Saturday claiming U.S. officials had pressured him to participate in a “spy” swap for the hikers, AFP reported.

He emphasized his claim that U.S. agents portrayed the hikers as spies: “That is the term they used.”

No swap, but hope nonetheless
None of this bodes particularly well for the hikers and their families whose hopes rose as Amiri flew to Iran.

Bauer’s mother, Cindy Hickey of Pine City, told the Associated Press: “I’m very happy that he’s been returned, that he can reconnect with his family. I can’t help but be hopeful this might loosen things up a bit.”

To say a swap is unlikely, though, is not to say the hikers have no chance of release as the first anniversary of their arrest approaches, Bina said.

Their case is a different puzzle.

To the extent ordinary Iranians know about the case, they are skeptical of the hikers’ story, Bina said. A key question is why the three Americans were hiking in war-torn Iraq and doing it so near the border of a country where officials were hostile to the United States.

“Iraq has not been a place recently where people go to enjoy themselves,” he said.

Still, on the international stage, Iran already has wrung some value from the hikers’ imprisonment by using them to show resolve in its tit-for-tat power struggle with the United States, Bina said.

And at some point, the hikers become a burden Iran would like to dump.

“They have to keep them safe because they know they have to release them at some time,” he said. “Generally they don’t keep people who they don’t want to hurt more than a few months.”

So a swap of some kind is not out of the question — although the United States wouldn’t likely use that language.

For months, Tehran has sought the return of 10 other Iranians who were extradited to the United States — from Canada, the nation of Georgia and other countries — to face charges related to arms dealing. Tehran could demand the release of at least some of them in exchange for the hikers, Beeman said.

But nothing is completely clear at this point, Beeman said, for either the hikers or for Amiri.

“Both of these situations are very, very foggy and ambiguous,” he said.

Meanwhile, he said, “I am very, very sorry for the hikers and their families.”