“Have you cut back on driving because of the BP oil spill?” Professor Michael Osterholm asked me.

I couldn’t say I had. But I understood that his point was broader than my personal driving habits — broader, even, than the disastrous aftermath of the blow up of BP’s Deepwater Horizon rig in the Gulf of Mexico.

Osterholm is a national security expert. His specialties are pandemics and food contamination, but he has served on blue-ribbon panels dealing with threats like bioterrorism and potential attacks on our power grids.

From a big-picture perspective, energy security is one of the most important strategic challenges facing the United States. And the BP spill has rattled our sense of security even though the dramatic failure of this one large oil installation is not a security threat akin to the terrorist bombings this week in Uganda’s capital.

But we are ambivalent to a point of near paralysis about how to respond. Congress has struggled to pass a watered-down energy bill. Even those in the Gulf who are threatened with the loss of marshes and sea beds that have sustained their families for generations are loath to temporarily halt more deep sea drilling.

Most of us are sickened by the sight of oiled pelicans and dead turtles. But will we translate that sentiment into any meaningful political or personal change?

Once BP’s disaster fades, will we simply move on to a different national obsession — and literally keep on moving on by the same oil-gulping means?

Waking up to the future
The White House’s new oil spill commission has yet to determine the full cause of the Deepwater Horizon’s explosion, but there’s no apparent evidence that sabotage was involved. And no one has defined any related threat to our overall oil supply and distribution systems.

So what we know for now is that the BP spill is a startling environmental disaster. It also threatens a major economic disaster, too, for people and communities along the Gulf coast.

Yet the big spill leads many to discuss it in terms of national security.

This dramatic incident should drive us to take full measure of the costs of our energy dependence, said Osterholm, who directs the Center for Infectious Disease Research and Policy at the University of Minnesota.

“If there could be any silver lining to a very dark cloud it should be that this is a wakeup call for our future,” Osterholm said.

He gets no argument from the White House on that view.

President Obama said much the same in his address from the Oval Office last month: “We can’t afford not to change how we produce and use energy — because the long-term costs to our economy, our national security, and our environment are far greater.”

Members of Congress have gone so far as to say the chaotic response to the spill exposes a level of unpreparedness that could make us more vulnerable to actual terrorist attacks.

Until someone takes away our oil
But let’s take it to a more personal level by going back to Osterholm’s question: “Have you cut back on driving because of the BP oil spill?”

What he really was asking was whether this spill will not only spark serious thought about America’s energy security but also spur meaningful action.

Osterholm wasn’t optimistic: “We will just keep going along until somebody takes our oil away from us. . . . Then we will start talking seriously about it in terms of national security.”

The subject is so big that most of us can’t see it in all of its dimensions.

We have spent enormous sums protecting our oil interests around the world. We have looked the other way while regimes in oil-rich countries — like Saddam Hussein’s Iraq for many years — brutally suppressed their own people.

We have worked to stabilize friendly governments in countries like Nigeria. Most Americans have no idea what we’ve done to keep oil and gas flowing from places with not-so-friendly regimes like Venezuela and Iran.

Now we face pressure to step up all of those activities as China, India and other countries join the global competition for oil.

No sense of urgency
No one could argue that we in the United States are not security minded.

As taxpayers, we foot hefty bills for war and for fighting terrorism around the world. Some Americans make the ultimate sacrifice by sending loved ones to fight around the world even though we lose too many of them. 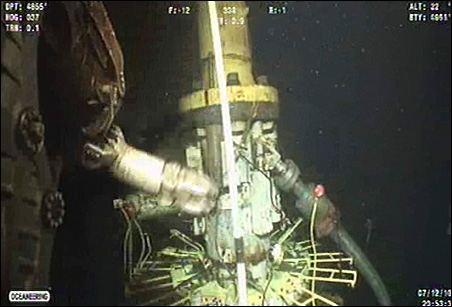 REUTERS/BP
A section of the new containment cap is pictured during capping stack operations at the site of the Deepwater Horizon on Monday.

We submit to body scans at airports and accept the bureaucratic rigmarole of getting passports just to crisscross our borders with Canada and Mexico.

But we don’t treat energy security with the same degree of urgency.

Did you know that dozens of people die each year working on our nation’s pipelines? That our oil imports rely heavily on countries — Algeria, Nigeria and Libya — that are home to men we have officially called terrorists? That a good share of the oil we import passes through chokepoints where terrorists and pirates have attacked in the past and likely will try to do so again? That there were more than 250,000 oil spills in U.S. waters between 1971 and 2000?

A mere four hours’ worth
Most of us are powerless to influence other causes of major tension and conflict around the world. But this one comes down to decisions about how often you back your car out of the garage, what kind of vehicle you’re steering and how far you will be driving it.

Americans have been unable — more to the point, unwilling — to connect the dots all of the way from their garages to the BP spill and across a politically seething world in order to think rationally about energy consumption and security.

“We don’t have a coherent or futuristic message here,” Osterholm said. “It shouldn’t be a surprise the BP spill happened. Yet, the thing that amazes me is how many people were surprised.”

Analysts at the Brookings Institutions’ Energy Security Initiative did a great job of relating our collective driving decisions to the BP spill.

The total volume of oil that reportedly had leaked into the Gulf during the first two months after the spill was roughly equal to the amount needed to keep one out of every five American vehicles on the road for one day, reported Charles Ebinger and Kevin Massy.

The real responsible party
If anything, they understated the consumption because they used 2009 estimates. The U.S. Energy Information Administration predicts consumption will rise again this year. And with world supplies tightening, deepwater drilling is one of the few options available for meeting the demand.

Keep that thought in mind as you read Ebinger and Massy’s conclusion, presented here in the next two paragraphs:

“Those lawmakers raking BP over the coals and those customers threatening to boycott the company would do well to cast their minds back to the last time representatives from major oil companies were treated to high-profile public displays of congressional ire. On that occasion, in April 2008, oil executives were asked to explain why gasoline was approaching the record level of $4 a gallon.

“BP is not drilling miles beneath the surface of the ocean for its own entertainment. It is doing so to serve the needs of a public that simultaneously wants energy independence and demands cheap and plentiful gasoline. Until we can curb our thirst for oil and move to renewable sources of transportation fuel — transition that will involve a necessary dose of financial and practical discomfort — we are the real responsible party for every deepwater well drilled in the Gulf of Mexico and beyond.”