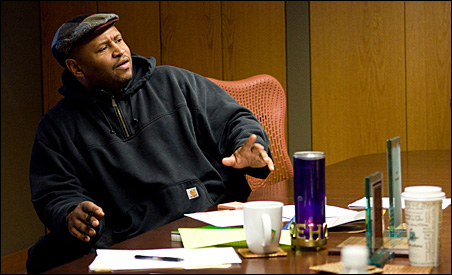 Photo by Bruce Silcox
Hip-hop artist I Self Divine: “Having access to open Internet allows me to bypass the middleman.”

From a Gunflint Trail resort owner to a Native American consultant to a South Minneapolis hip-hop artist, Minnesotans weighed in on broadband and the future of the Internet this past week as officials from the Federal Communications Commission came to town.

Major controversies and shared concerns were voiced during two very different sessions addressing upcoming decisions in systems as economically important for this century as was electrical wiring during the 20th Century.

Net Neutrality
Chaka Mkali summed up the essence of a roiling national debate over what’s called “net neutrality.” The question at issue is whether the FCC should have authority to ensure that content flows equally without discrimination or interference by service providers and media companies.

Mkali is a local hip-hop artist performing under the name I Self Devine. He’s also an organizer for Hope Community, which serves Minneapolis’ Phillips neighborhood. He was on a panel of speakers at Minneapolis South High where about 600 people attended a future-of-the-Internet forum.

“As a socially conscious and politically conscious hip-hop artist on a local independent label, it is difficult to compete with major labels for distribution, touring, radio and video if you don’t fit nicely into the marketing process,” said Mkali, whose label is Rhymesayers Entertainment.

But the degree of difficulty has dropped dramatically on the free-wheeling Internet where independent artists, authors and bloggers have joined millions of budding entrepreneurs to push their stuff alongside the fare sold by large corporations.

“Having access to open Internet allows me to bypass the middleman, leveling the playing field and amplifying my voice in ways unimaginable,” Mkali said.

Verizon-Google plan
The balance of that access could change under a proposal by media giants Verizon and Google. They proposed this month to preserve openness on today’s wired Internet while also leaving companies free to create some restricted premium networks in the future, especially on wireless devices like mobile phones.

That would be devastating for the little people trying to do big things online, Mkali said.

“If our Internet freedoms are not protected, there is no way I will be able to compete with corporations with unlimited resources promoting homogenous sound that is not reflective of the values of our community,” he said.

In the Phillips community — where 70 percent of the residents are Native Americans, Latinos, east Africans, African Americans and other ethnic minorities –the Internet has been a vital resource for organizers working to empower youth, connect with local resources and engage voters.

“If the FCC does not impose regulations protecting Internet users, reasserting their authority over broadband and pass strong net neutrality, it will compromise democracy and democratic participation while perpetuating further disparities with staggering impacts none of us here today want on our hearts and minds,” Mkali concluded.

The forum was sponsored by organizations that largely agree with Mkali: Free Press, Main Street Project and the Center for Media Justice.

“Hands off our Internet”
But not everyone in the crowd was on board.

Zack Segner, a masonry worker from Loretto, Minnesota, stood near the back of the South High auditorium holding a large banner lettered: HANDS OFF OUR INTERNET.

Early in the program, he shouted, “The Internet is working fine right now!” When one speaker lamented that the FCC has no real authority to regulate Internet service providers, he yelled, “Yea! Wikileaks!”

Segner told me that he didn’t represent any group opposing government regulation of the Internet, but he’d heard about the event from Tea Party members.

“The Internet works, and I don’t think we should go to a Chinese-style Internet,” Segner said. He was referring to Chinese government controls that have, among other restrictions, blocked access to sites noting the 20th anniversary of the protests in Tiananmen Square.

A world of private internets
Copps said he is deeply worried that the Internet will be turned over to “special interest and gatekeepers and tool booth collectors who will short circuit what this great technology can do for our country.”

Years ago, broadcasters claimed that giving them free spectrum was in the public interest, and cable companies pledged to fill holes in public affairs programming. But media consolidation has rendered those pledges largely empty, Copps said. Among other results, he said, “newsrooms were shuttered, reporters were yanked off the beat and fired and investigative journalism was placed on the endangered species list.”

“We were too quick to take their word, and now the big internet service providers are telling us the same thing,” he said.

“Do you think we should take their word?” he asked the crowd.

If anyone said yes, I could not hear it for all of the hearty “NOOO” responses.

As for the Verizon-Google proposal, Copps said: “The Verizon-Google gaggle wants to build a world of private internets that would vastly diminish the centrality of the Internet that you and I know. They want a tiered Internet… I call it gated communities for the affluent.”

Something really great
A few days later, FCC Chairman Julius Genachowski was more circumspect about net neutrality. He spoke Tuesday at a broadband summit organized by Sen. Amy Klobuchar, D-Minn. About 150 people attended the summit at the University of Minnesota.

“I feel very strongly that we stumbled into something really great in the country when the Internet was developed with open architecture that encouraged a whole series of things that we have seen over the last number of years: incredible innovation, access to information and ideas,” Genachowski said.

He said it was important that consumers “continue to access the lawful content of their choice on the Internet.” And he said “we need an enforceable framework to preserve Internet freedom and openness.” But he did not specify whether that should be the framework proposed by Verizon and Google or the one advocated by Copps.

Kerfoot said his family recently decided to vacation in a remote Swiss village. It took them two minutes to make an online reservation at the resort they had chosen. 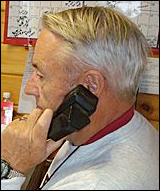 “There is not one person in Europe who can make an online reservation with me,” Kerfoot said.

Further, Kerfoot said he hasn’t had a foreign visitor all year while half the customers at Canadian wilderness resorts in the Rockies have come from Asia where travelers overwhelmingly prefer to book online.

Living in remote and rugged northeastern Minnesota, Kerfoot is among some 100,000 households in the state that don’t have broadband. And he can’t get it even if he wants to pay for it. (MinnPost’s report on his county’s fight for connection is here.)

The upshot for Kerfoot is that he is stuck using dial-up Internet over 50-year-old phone lines. He can’t accept online reservations, quickly process a guest’s credit card payment or offer his guests the Minnesota DNR’s online system for obtaining fishing licenses.

“We are close to becoming second-class citizens,” Kerfoot said.

Losing ground to other countries
The United States prides itself in claiming first-class economic standing around the world. But it jeopardizes that standing with inferior broadband coverage, Klobuchar said.

The latest report on the subject from the Organization for Economic Cooperation and Development ranks the United States 15th among its member nations in broadband subscribers per 100 inhabitants.

And we’re losing ground. The same report ranks the United States 18th in the growth of broadband penetration.

Klobuchar said our average connection speed is 4.7 megabytes per second compared with 33 megabytes in South Korea.

Jobs go where the connections are.

Klobuchar said every percentage increase in broadband deployment sparks the creation of some 300,000 jobs.

Winners and losers
Pam Lehmann told one of the most encouraging tales in the two sessions. She is executive director of the Lac qui Parle County Economic Development Authority in West Central Minnesota.

Lac qui Parle — with a population of about 8,000 in the 2000 census (probably lower now, Lehmann said) — has set the ambitious goal of becoming the first county in Minnesota with fiber-to-the-premise connections for every household and business.

The county won broadband’s equivalent of the lottery this month: a grant/loan package of nearly $10 million in federal stimulus funding for the fiber system.

Now the county is gearing up to attract telecommuters and businesses and expand delivery of health care and online education. As a result, it will punch that population much higher than 8,000, Lehmann predicted.

The task force recommended goals of making broadband coverage available to every home and business in the state by 2015 and also making the state among the top five in the nation for broadband speed and penetration. The Legislature agreed this year, passing the goals into law.

But there have been more losers than winners in the scramble for federal funding.

“We are not there,” King said at the summit on Tuesday.

We are not even close. But we are making progress.