If you could collect $100 for every claim a political candidate slings your way about Minnesota’s business taxes, you probably could start a respectable small business.

The political points are simple: Minnesota’s business taxes are so onerous they drive companies and jobs to other states. Or, from another view, companies use loopholes to avoid paying their fair share of the costs of state and local services.

Of course, the issue is not at all simple. More than any other, it offers proof that statistics can be manipulated to support almost any point.

So it is with both humility and trepidation that I take up business taxes for this installment of MinnPost’s occasional series on taxes. You can read the first article in the series here.

Look beyond the income tax
Politics aside, reasonable people could and do conclude that Minnesota’s business-tax climate compares favorably with other states — even with South Dakota.

If you haven’t slept through the political debates of the past few decades, you know that South Dakota has no corporate income tax. Minnesota does.

But corporate income taxes are not even close to being the biggest tax burden on businesses.

That distinction goes to property taxes. They accounted for 36.2 percent of all the state and local taxes that businesses paid in Minnesota during fiscal year 2009, according to a recent report by the Council on State Taxation, a nonprofit trade association that grew out of the Council of State Chambers of Commerce.

You still have to say that’s a significant share, one worth debating. But you also have to keep it in perspective.

It also serves up some surprises.

What’s a fair return?
The basic rationale for taxing businesses is to pay for government services benefiting businesses, the report says. If a business gets a dollar’s worth of direct services for every dollar it pays in taxes, then it gets a fair deal.

Measuring the services part of that equation isn’t easy, but the Federal Reserve Bank of Chicago has developed methods for calculating estimates. It counts items like police and fire protection, water and sewer infrastructure, transportation amenities, etc.

The trickiest item to count is education. There is no doubt that companies benefit from the millions that states spend on everything from specific vocational training — in, say, factory robotics — to general improvement of reading and math skills.

If you operate a chain of drug stores, you look to universities to train pharmacists and the K-12 system to turn out workers who can run a checkout counter. If you’re in the business of keeping pets healthy, you need highly trained veterinarians, lab technicians, bookkeepers and receptionists. Your modern auto-repair shop couldn’t operate without trained specialists in electronics.

You get the idea.

Because the business value of all of this training is difficult to gauge, the Ernst & Young analysts offered different ways of looking at each state’s tax-benefit ratio.

If you count absolutely no benefit from education, Minnesota businesses paid about $3.80 in state and local taxes for every dollar’s worth of benefits they received. That’s close to the national rate of $3.50 and comparable with other states in the Upper Midwest.

But the ratio changes if you assume that half of the money spent for education benefits businesses. Seen that way, Minnesota businesses pay about $1.10 in taxes for every $1 in government benefits. That compares with $1.50 for North Dakota, $1.40 for South Dakota and $1.00 each for Wisconsin and Iowa. And it’s better than the national rate of $1.20. 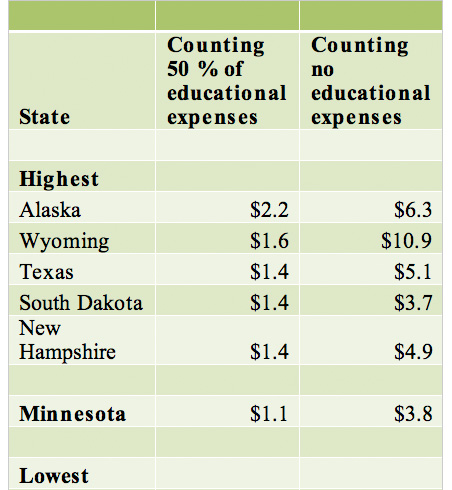 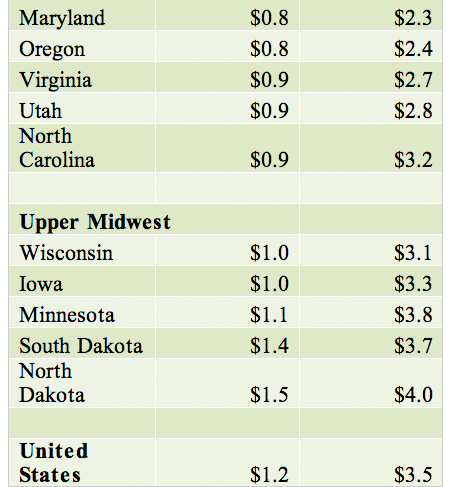 Measure against economic activity
Another way of looking at a state’s competitiveness is to measure state and local business taxes that actually were collected against economic output. The report calls such output private-sector gross state product.

This isn’t a perfect measure because competitiveness depends on where the economic activity took place. A tax on a local service — say, a restaurant meal in St. Cloud — probably doesn’t take away from the state’s overall competitiveness. But certain taxes on a company that sells lawnmowers nationwide could be a different story.

Still, economists do compare states by this measure because it reflects the actual taxes paid after businesses took advantage of various deductions and opportunities to pass expenses along to customers. The Ernst & Young report calls it the “total effective business tax rate.”

Here too, Minnesota stacks up favorably. Its total effective business tax rate for 2009 was 4.3 percent. That compares with 8.2 percent for North Dakota, 4.9 percent for South Dakota and 4.6 percent each for Iowa and Wisconsin. The national rate was 4.7 percent.

By this measure, Minnesota is 15th from the bottom state in business taxation.

Business taxes as a share of private-sector gross state product 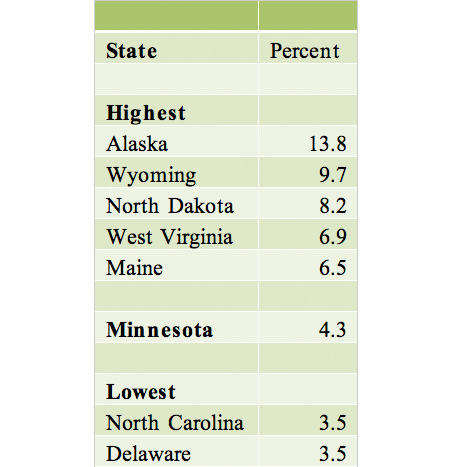 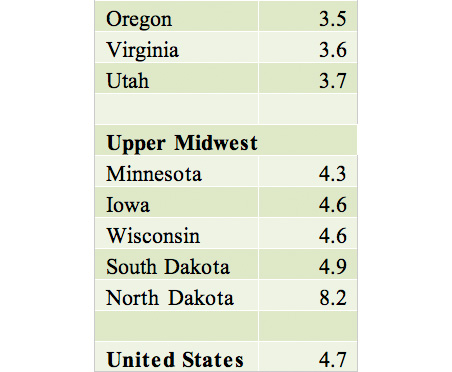 Changing direction
Finally, the report looked at the direction states have taken in terms of spreading any increase in their tax burdens. Nationwide, businesses paid 46.7 percent of the increases in state and local taxes from 2005 to 2009. In Minnesota, they paid 36 percent. That compares with 73.5 percent in North Dakota, 61.6 percent in South Dakota, 55.7 percent in Wisconsin and 50.5 percent in Iowa.

I’m not sure what to make of that last measure. One explanation for the high rate in North Dakota, for example, could be that business thrived in the state during the five years and thus there was more to tax. Comment from readers on this point would be great.

The poor pay more
One point to keep in mind is that businesses pass a good share of their taxes to consumers in the form of higher prices. These shifted business taxes fall most heavily on low-income families, reflected in everything from rent to medical bills.

Minnesota has taken care to shield less-fortunate families from the brunt of the sales tax by exempting essentials like groceries and clothing. But, because businesses can pass along their tax expenses for everything from utilities to software to property, the poor still end up paying a hefty share of taxes.

So, if you think these business tax issues are all about business owners, think again.

Not far apart
That regressive shift in business taxes is one reason the political sides aren’t as far apart on these issues as campaign rhetoric makes it seem. Republicans and DFLers alike have been concerned that workers and the poor end up paying dearly for high business taxes.

The big political differences begin with claims that taxes on the higher brackets of personal income hurt businesses too. That’s a good subject for a future installment of this series.

For now, though, I’ll say it helps explain the gap you almost surely will encounter between the analysis presented above and the claims you will hear from candidates for your local legislative seats and statewide offices.

One example is often-cited data from the Tax Foundation, a conservative think tank in Washington, D.C. Its most recent ranking of states [PDF] counts Minnesota among the 10 states with the worst business tax climates. One factor in the foundation’s decision to rank Minnesota 43rd among states was the state’s individual income tax.

Keep an eye on property taxes
A key factor to watch in the political debates is the property tax. That was one area where Minnesota scored favorably in the Tax Foundation’s business-tax-climate report, ranking 16th best in the nation.

But by every indication, property taxes are climbing in Minnesota as the state government balances its budget by pulling back support for local government services. The debate, of course, is whether cities and counties should and can further slash spending rather than raise property taxes.

Meanwhile, here’s an excellent guide [PDF] to business taxation in Minnesota. It’s from the Center for Public Finance Research, an arm of the Minnesota Taxpayers Association.

Sharon Schmickle writes about the economy, science, international affairs and other topics. She can be reached at sschmickle [at] minnpost [dot] com.