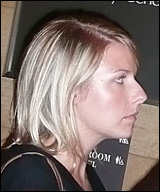 Abby the Republican Tracker was being tracked.

A gaggle of TV camera operators captured her every move as if she were Lindsay Lohan in retreat and not a proud Tom Emmer supporter. Abby the Tracker scurried out of the front door of the Capitol this afternoon, an instant, sure-to-be-fleeting mini-celebrity in the YouTube-driven world of politics and visual campaign etiquette. It was all great television — film at 5, 6 and 10.

Abby (who refused to give her last name today but who was identified as Abby Michaud in an earlier Star Tribune story) and her tripod-toting ilk were the targets of DFL gubernatorial candidate Mark Dayton today at a news conference in which Dayton lashed out, claiming the GOP was “harassing” him and preventing people at last week’s Game Fair event from greeting him at his booth. He called their behavior “disruptive” and “unprecedented.”

Dayton video tracks trackers
In a video, which is now posted on Dayton’s campaign website, Dayton described what seems to be two Republican trackers — including Abby and a fellow name Jordan — within a few arms’ lengths of Dayton. He said their actions were “intimidating” people who wanted to talk with him and “blocking people from accessing me … I think Minnesotans want a fair and decent campaign. I think Minnesotans know this is an unfair political tactic … This is beneath the dignity of Minnesotans.”

While some political operatives might have been slapping their foreheads and wondering what decade Dayton was living in, the candidate’s concerns naturally flow from his effort last week, when he called for an end to attack ads.

His call came one day after the Minnesota Republican Party first aired a commercial calling Dayton “erratic” and “too risky” for Minnesota.

But it also came after an independent organization, the Alliance for a Better Minnesota, had launched anti-Emmer ads even before the Aug. 10 primary. Indeed, a full half-hour after Abby the Tracker dramatically exited the Capitol surrounded by mini-cams, the Alliance announced the airing of a fourth ad, this one defining Emmer as someone who missed 142 votes in the Legislature in the 2010 session.

Of course, this one’s not from Dayton’s campaign, but from a friendly support group, which is heavily funded by his former wife and some family members. And, of course, it’s aimed at Emmer’s record, not name-calling.

The last straw
Campaign carpet-bombing is an issue that is genuinely important to Dayton. According to one staffer, the conversation about Emmer’s trackers has been going on for a while within the Dayton campaign, but the Game Fair incident was the final straw.

There was internal discussion about whether to hold today’s news conference and just how it might be received, but, in the end, there was agreement that Dayton should speak out.

His protest today became all-too-easy fodder for the state GOP, which is particularly adept at rapid response and laser-like talking points. First of all, GOP spokesman Mark Drake — who happened to be tracking Dayton’s news conference in Room 125 of the Capitol — disputed Dayton’s claims that the GOP trackers were disruptive or too close. Second of all, Drake couldn’t avoid dropping the words “erratic,” “weird” and “bizarre” into just about every sentence, or in barking (again) about the overdone story that Dayton left his dogs in the car last week during the news conference about negative campaigning.

Even as Dayton began pointing out on a screen his view of GOP trackers’ actions — much like a football coach would show an end-around to his team — GOP Deputy Chairman Michael Brodkorb was tweeting his fingers off to his 1,669 followers:

. MN GOP trackers have been on @Mark_Dayton for months — he’s only complaining now because the pressure is getting to him.

And then there was the inevitable canine tweet: @Mark_Dayton is complaining about tracking today because he was caught leaving his dogs in his car in 100+ degree heat for an hour…

After Dayton showed the video, his campaign manager Dana Anderson released letters (PDF) she sent to GOP party chairman Tony Sutton and Emmer campaign manager Cullen Sheehan. She complained that GOP trackers created “as much congestion as possible” around Dayton at the Anoka event and that some citizens “thought we were causing this problem, not you.” 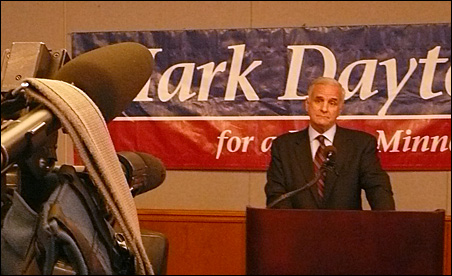 MinnPost photo by Jay Weiner
Mark Dayton complained today that GOP trackers were stepping over the bounds of propriety in following him around.

The GOP trackers weren’t wearing clothing or hats or badges identifying them, she wrote, pledging ” that neither our campaign nor the DFL Party will engage in any ‘tracking’ of your candidate. We will, along with the press, videotape public forums and debates — but we will not trail your candidate’s every movement with a camera in his face. I hope you will join in this pledge.”

Tracker ban gets no traction
Good luck. Unfortunately, that’s not about to happen.

GOP chairman Tony Sutton said: If Mark Dayton can’t handle a 22-year-old with a camera recording his public statements, how can he possibly stand up to the rigors of being governor?”

A DFL spokeswoman said her party “might” consider wearing identifying T-shirts or something or other when it tracks Emmer, but … ahem, we’ll get back to you on that.

And Emmer campaign manager Sheehan said his campaign doesn’t track, just the GOP. He added: “Tracking candidates, for better or worse, has been a part of elections for over a decade. Tom Emmer will be talking about how we create jobs, improve our economy and reform our education system regardless of who is watching, listening or recording his campaign.”

Tracking is about “gotcha.” The most famous tracking moment of all-time — the Hall of Fame snippet of video gotchas — came during the 2006 U.S. Senate re-election campaign of Virginia Republican George Allen when he was caught making a racially insensitive remark, calling an opposition tracker of Indian descent a “macaca.”

Earlier this summer, the Democratic National Committee urged all its supporters to become citizen trackers.

Unilateral dis-camera-ment is not about to happen any time soon, even if Sen. Dayton’s sensibilities are legitimate.

“I’m sure Mark Dayton would like to hide from the voters for the next three months,” said the GOP’s Drake, “but that’s just not gonna happen. If you can’t stand the heat, stay out of the kitchen.”

These days in campaigns, even kitchens may have video cameras and microphones.