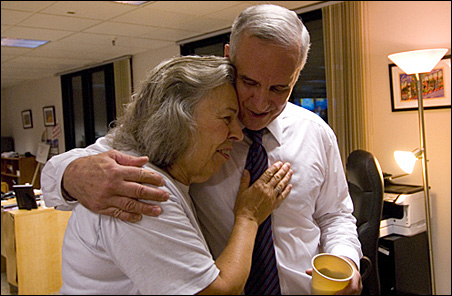 MinnPost photo by Bill Kelley
Mark Dayton is congratulated by supporter Carol Kough, whose husband was the mayor of Austin during the Hormel Strike of 1985.

At 1 this morning, Mark Dayton, the come-from-behind winner of Tuesday’s DFL gubernatorial primary, was still in an office in his no-frills campaign headquarters, unwinding wraps from his right knee.

“Knee injury?” he was asked.

“Good thing most of the parade season is past,” I replied.

Dayton shook his head and started rattling off a long list of parades between now and Election Day. He didn’t need a calendar. He knows the state and its parades.

“Turkey Days [Worthington],” he said. “I always thought that was a good name for a parade for politicians to be in.”

Following his 1-point victory over the DFL Party’s endorsed candidate, Margaret Anderson Kelliher, Dayton is off and running again. Although he had consistently been ahead in the polls, he was trailing badly in the early returns before the northern DFL stronghold came in solidly and steadily for him.

His approach to campaigning is similar to that of his old boss and mentor, Rudy Perpich, who, as it happens, was the last DFL governor Minnesota’s had.

He will show up at as many coffee shops and parades as is humanly possible. His oratory at times will be hard to follow. But he will be known everywhere he goes because he’s been there before — probably two or three times.

Anti-Emmer sentiment should solidify DFLers
Beyond his instantly recognizable name and his money, Dayton has one more important thing going for him as the real campaign begins today. He’s got an opponent, Tom Emmer, who will do more to unify Dayton’s party than anything the DFL could possibly do.

The two men have just one thing, besides hockey, in common: passion in their beliefs. After that, the contrasts couldn’t be more stark.

Emmer’s a relative newcomer to state-level politics. He was elected to the House from his Delano district in 2004. Dayton has been winning — and losing — elections since 1982.

On environment, Emmer wants deregulation fast. Dayton wants to put some spine back in the Pollution Control Agency, which he has been calling the Pollution Cooperation Agency.

On education, Emmer will attack the teachers union as the fundamental problem. Dayton will praise teachers and promise to invest far more in education, from preschool through universities.

On the Legacy Amendment, Dayton was for it, Emmer against it.

And on and on. Name an issue, these two disagree.

Emmer and the Republican Party will be on the attack from the beginning. Last night, at a gathering of Republicans, party officials were hoping for a Dayton victory. They’ll pound him on taxes. (Surely, Republican ads will include Kelliher sound bites claiming that Dayton’s tax proposals would make Minnesota the highest-taxed state in the country.) They’ll pound him on his record as a U.S. Senate (where Dayton gave himself — as well as the rest of the Senate — an “F” grade.)

Dayton-Emmer contrasts play to Horner’s strength
These contrasts should leave Tom Horner, who easily won the Independence Party’s primary, all sorts of room to operate. Clear back when he was still pondering whether to get into the race, Horner was saying the ideal match up for any IP nominee would be Dayton versus Emmer.

But Horner has problems of his own. He still has little name recognition outside the metro area. Dayton proved again last night that this is a big state. He lost badly in Hennepin and Ramsey counties but rolled as the night went on and the results started coming in from Greater Minnesota.

To be viable, Horner had said earlier, that he needs to get his poll numbers into the 20 percent area. To get to that level, he’ll need money, and that is hard to come by until you’re viable.

Horner lacks something else that made the IP a one-night success 12 years ago. He lacks the charismatic personality of the celebrity candidate, Jesse Ventura.

The middle-road opportunity is there for Horner, but it’s not as great as it may appear on paper.

Dayton did win this race by being himself — and, of course, by spending money on television spots that were focused on his simple, but specific, messages: Tax the rich, invest in education, rebuild seniors’ infrastructure. Essentially that was his entire campaign.

Why did Kelliher fall just short?

Dayton was gracious, throughout the long night complimenting Kelliher on running a magnificent campaign.

It should be noted that the Dayton staff was highly disciplined. There was to be no celebrating if Dayton won the race.

“It’s not fun beating your friends” was the way Dana Anderson, Dayton’s 33-year-old campaign manager, put it. “This is only the primary.”

The simple answers for her loss will be that she lacked resources and the name recognition of her opponent. But she did have the DFL Party endorsement, not to mention the bulk of union endorsements, on her side.

What she didn’t have was a campaign that emphasized who she is. Her campaign was filled with bromides and seldom specifics. It was as if she wasn’t about to reveal herself.

For reasons known only to Kelliher and her closest advisers, she never appealed directly to women, even though she was the first woman ever to win her party’s endorsement.

Former party chair — in the Perpich era — Ruth Orrick contributed to both the Dayton and Kelliher campaigns, though in the end worked on Dayton’s behalf “because he asked.”

At Dayton headquarters Tuesday night, she said she was surprised that Kelliher didn’t make gender a part of this race.

“She is a woman of tremendous accomplishment and ability,” said Orrick.

At Sunday night’s debate, a couple of Kelliher’s female supporters nodded their head in agreement when Rep. Phyllis Kahn said that “gender doesn’t matter much in hard economic times.”

But it was just one sign of how Kelliher seem to studiously avoid revealing herself.

That self-control, that refusal to put her heart on her sleeve, showed up even in the final night of her campaign.

In direct contrast to Dayton, who spent the night wandering around his shabby headquarters, talking to friends, staff and reporters through bad times and good, Kelliher remained secluded. She didn’t make a public appearance at Jax Café, where the DFL was holding its big “victory” night, until after midnight.

One question now is what will happen to Kelliher? She is accomplished. She does have an impressive political portfolio. She is young. But when the new legislative class takes over in January, the House speaker will have no job.

Meantime, Dayton moves on, limping slightly because of those knees weakened by so many parades.

He will be glad to have the support of the DFL, but almost certainly he will not allow his campaign to be taken over by the party. His campaign still is smarting from the fact that the DFL did not allow Dayton on its convention floor in Duluth in the spring. He wasn’t seeking endorsement, so the man who had contributed piles of money and pages of history to the party was not welcome.

Unique Dayton campaign operation
Dayton said he holds no grudges against anyone. But make no mistake. This will be a Dayton-run campaign. It’s a unique operation, outwardly a rag-tag looking grouping of people. Certainly, it was a far cry from the show of political muscle — U.S. senators and scores of legislators — surrounding Kelliher.

Last night, Dayton was surrounded by his sons, a handful of old-time DFLers, some young supporters who were glued to computers and his running mate, Yvonne Prettner Solon, the Duluth senator who was just a little less stoic than Dayton as the results shifted from a huge Kelliher lead to a tight race, to a Dayton victory.

There also was a contingent of workers from the American Federation of State, County and Municipal Employees. The AFSCME union jumped on what turned out to be a Dayton bandwagon early, long before he was being taken seriously by most pundits.

“We put it all out for him,” said Eliot Seide, the union’s executive director, “and the reason’s simple. He’s not afraid to speak truth to power.”

Anyway, this was a loosey-goosey group. Even the Republican tracker — the young man who has spent much of the last few months trailing around recording every utterance of Dayton’s — was welcome.

Anderson invited the tracker to partake of a modest spread of food that was laid out on a table inside the headquarters. The only requirement was that he had to leave his camera outside.

Everyone knows the attacks that will be coming, presumably starting today. But, Anderson said, Dayton knew his own vulnerabilities before entering the race. And the primary gave him practice in responding to them. In the final weeks of the campaign, Kelliher was not reluctant to bring them up.

Only once did Dayton’s crew start cheering. That came late in the night, when Dayton finally took the lead.

The cheers ended quickly, and Dayton promised only one more thing.

“More hard work,” he said to his staff and volunteers.

Mark Dayton, a ‘wounded’ parade veteran fresh from a narrow DFL primary win, is off and running again