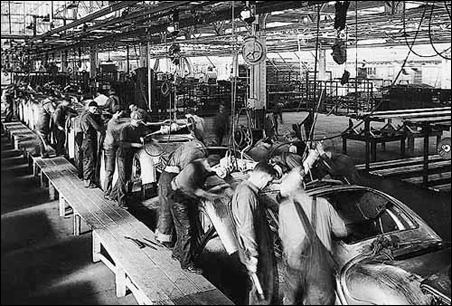 Courtesy of the Minnesota Historical Society/Photo by Norton & Peel
The St. Paul Ford assembly line, circa 1935.

Some men want a sports car to combat a midlife crisis.

I wanted a pickup truck. (Perhaps that has to do with my South Dakota roots.) So a decade ago — OK, it was a late-stage mid-life crisis — I purchased a Ford Ranger, the Northland edition, built by Minnesotans.

I drove that truck off the lot and felt like a man again.

The morning after the purchase, I went out to admire my maroon truck and noticed friends had put a sticker on the tailgate. “Cute truck,” it read. Devastating. Real men drive pickup trucks, and real men don’t like that word “cute.”

But I recovered from the low blow and headed west with a load of stuff in the back of my pickup. My cocker spaniel, Rosie, was at my side. Man and dog and country tunes and a pickup truck. What could be better?

Then, I pulled into a café/gas station in the middle of Montana. The testosterone drained from my body. All around me were big men, with big pickup trucks with big bumpers. They all had dented fenders and big dogs, with names like Butch, in the front seat.

I was a city slicker in the country driving a cute truck.

All of this came to mind again with news that a Minnesota delegation, led by our governor, went, bearing tax credits and other financial gifts, to Michigan to plead one more time to keep open the Highland Park plant, where Rangers bounce off the assembly line.

Apparently, Ford executives were polite, but not impressed. It appears that the Ranger, that cute little truck, may be doomed. as is the plant where it is built.

Start with this: Ford has been trying to kill off the Ranger, which was first produced in 1983, for years. They can make more money selling those bigger pickups, the Ford 150s, 250s and 350s, than they can selling the Ranger. Given that, the company hasn’t made improvements on the Ranger in more than a decade.

Part of the reason for that benign neglect, according to Fred Zimmerman, a retired engineering and management prof at St. Thomas, is that, up until the current management team came on the scene in 2006, Ford’s CEOs have been awful.

“Ford had three not very good chairmen in a row,” Zimmerman said.

Those three CEOs, said Zimmerman, seemed incapable of decisive action. “Catonic” was the word he used to describe the CEOs.

It was that indecisiveness that led to Ford making no improvements, which continued to be a strong seller, despite the company’s neglect.

The new management, under CEO Alan Mulally, Zimmerman said, has come to realize that even if there aren’t big profit margins in small vehicles, they contribute to the bottom line.

“I’m told Ford won’t make any money on the Focus for 10 years,” Zimmerman said. “But they’ve come to the understanding that just having the Focus helps them sell bigger cars. It brings people into the showroom.”

By neglecting the Ranger for so many years, Ford wasn’t in a position to counter changing market demands. High gasoline prices, for example, diminish the interest consumers — even those big guys out in Montana — have for big trucks.

So Ford itself has played a big role in the diminished sales of the Ranger.

Did Minnesota drop the ball?
But Zimmerman says the state of Minnesota also has played a role in losing the plant where the Rangers are produced. He believes that it’s never looked at the big picture regarding the plant and what Ford would need to make it functional into the future.

Recall that on Wednesday, after the meeting with Ford executives, Gov. Tim Pawlenty said that one of the big problems facing the Highland plant is its distance from the supply lines that Ford now seeks in producing cars and trucks. Pawlenty said there’s really nothing Minnesota could do about that.

But Zimmerman says he’s been telling Minnesota political leaders for years that there is something they could do about the supply line problem.

The huge issue in vehicle manufacturing, Zimmerman said, is the metal-stamping of hoods. They’re big and bulky and because of that, heavy and expensive, to ship.

There are, the prof said, a number of metal stamping companies in Minnesota. With some forward-looking state leadership, some of those companies could have been expanded to stamp hoods for the Ranger, or any other vehicle. That would have been a huge incentive for Ford to keep operating at Highland Park.

In general, Zimmerman believes the state has done a poor job at offering the sort of meaningful incentives that would bring manufacturing to the state. For several years, he said, he was on the board of directors of Winnebago. In 2004, when Winnebago was looking to build a new plant, nine states — including Minnesota — made proposals, Zimmerman said.

“Minnesota’s was dead last,” he said. “It wasn’t even professionally done.”

And he’s not been impressed with Minnesota’s approach to saving the Ford plant.

“What we’ve had is years of neglect and aloofness, interspersed by panicky visits made by dignitaries.”

Add incompetent Ford executives and sluggish Minnesota pols together and you come up with a bad end for the Ranger and the St. Paul plant.

Actually, there are some rumblings that Ford may not pull the trigger on the Ranger. There’s talk that a new version of the little pickup will be produced in Australia (let’s hear again about the supply line issue?) and shipped everywhere, including to the Unite States.

Meantime, my St. Paul-built truck and Rosie push on.

Me and my Ford Ranger: Whom should I blame for its shaky future?