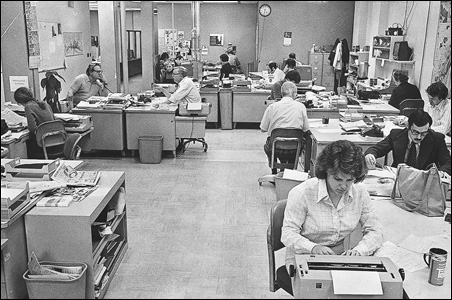 “News to Me: Adventures of an Accidental Journalist,” University of Minnesota Press
The newsroom of the Duluth News-Tribune back in 1978. Laurie Hertzel is at the far left.

Laurie Hertzel’s first job at the Duluth News-Tribune was newsroom clerk. She wrote obituaries, collected the matters of record from the county courthouse, answered the city desk phone, and, briefly, made coffee. Most of the newsroom folk were men back in those days, but the bright young women who were just starting to get hired were already making a difference, not just in how the news was reported and written, but also in the style and standards of the newspaper itself.

In the morning, I caught the bus downtown to the Duluth News Tribune. Or if the weather was nice and I was up in time, I walked. My route took me along Superior Street, the lake glittering to my left. I walked past the Kitchi Gammi Club, which banned women (except as guests of men, and even then they had to use the side door); the mammoth, echoing Sears store on the edge of downtown, where my mother, and other mothers, shopped less and less often now that the Miller Hill Mall had opened on the edge of town; and a whole lot of empty storefronts. I walked one steep block up the hill to First Street, climbed the stairs to the second floor, and became part of the swirl of the newsroom. Duluth might have fallen on hard times, but it was a lively summer for news. We published two sections most days — news and sports — and they were packed with stories. Laying out pages wasn’t yet called “designing” and wasn’t yet seen as an art form, and stories were shoehorned in every which way on crowded and jumbled inside pages. Sometimes you found the interesting stuff almost by accident; it made me a careful reader because I didn’t want to miss a thing.

Every day the front page carried some new twist in the plan to ban motors in the Boundary Waters Canoe Area, or news of another wildcat strike up on the Iron Range, or another point of drama in the Reserve Mining story. For years, the Silver Bay company had been dumping taconite tailings into Lake Superior, and now the lake water — our drinking water — tested high for asbestos. In July, a judge ordered Reserve Mining to shut down. Silver Bay residents were furious; Reserve was their main employer, really the only reason the town existed; and if the mine closed, almost everyone would end up out of work. Meanwhile, until they could figure out how to filter out the asbestos, Duluth city officials began giving away water. But because the shutdown and the pollution were so controversial, it was seen as a political statement to accept the filtered water, and thousands of the plastic jugs piled up.

I watched the reporters with something like awe as they grilled sources, charged out of the room on their way to an assignment, and pounded out stories on deadline, and I was glad for my safe corner answering phones and taking obits. I could never do that job. We hired a few more women—our first female photographer, Joey McLeister, a quiet, slender woman with an unexpectedly wicked sense of humor, and a couple more reporters, Sandy Battin and Chris Paulson—but the room remained intensely male. Jokes flew at the women’s expense, and in print women were still referred to by their husband’s names. One of our copy editors liked to cut out the Lockhorns cartoon and paste it up at his desk; the shrewish Loretta Lockhorn, he said, was just like his wife. When a woman in the newsroom got married, one of the old-timers asked her gravely if she planned to quit her job. I had a healthy respect for authority, and in my eyes the other women were fearless. One afternoon when the little one-hole women’s bathroom across from the sports department was occupied, Suzanne Perry walked boldly into the men’s room. When another reporter arranged to meet a source at the Kitchi Gammi Club and then was denied entrance at the front door, she came back to the office furious, kicking herself for obediently using the side door. Bob Knaus liked to tease Jacqui Banaszynski and Suzanne about their argumentativeness. When they grew particularly fervent, he asked if they were on the rag. Jacqui and Suzanne responded by threatening to document their menstrual cycles and present him with a “flow chart.” That way, they told him, you’ll know if we’re truly angry or just hormonal.

Answering the city desk phones and talking to readers, I learned how deeply people cared about the News-Tribune. They didn’t just like the newspaper, they thought it belonged to them. People called and wanted events publicized repeatedly; they wanted arrests left out of the “matter of record”; they wanted obituaries to be rerun adding shirttail relatives and beloved pets as survivors. When I told them no, as I often had to do, they grew frustrated. “But you’re a public service!” people told me more than once. No, we’re a for-profit business, I wanted to say, but didn’t. I liked that they cared so much, that they felt such ownership of the newspaper; it made me proud. But I knew who really had the power, and in those years it wasn’t the readers, and it wasn’t the advertisers.

One August afternoon, as I typed up yet another obit of yet another long-lived Finn from the Iron Range (we used to joke that every other obit was for a guy named Toivo Maki), I watched Knaus walk out of his office and head to the bulletin board. He tacked up two sheets of pale green paper and then walked back to his office without a word. A little knot of reporters gathered. One editor shook his head slowly and then walked away muttering, “This is stupid. This is really stupid.” I waited until the knot had dispersed, and then I slipped over to take a look. The memo was unsigned. News-Tribune and Herald policy on treatment of women in news columns, the headline said. This policy will cover all sections of both newspapers. 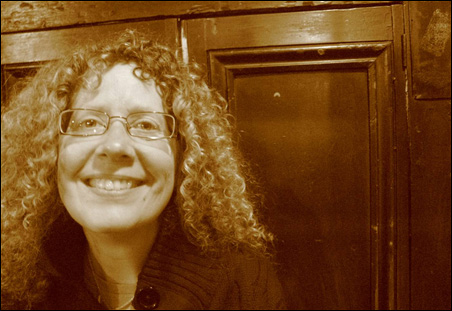 “News to Me: Adventures of an Accidental Journalist,” University of Minnesota Press
Laurie Hertzel

No longer would women be referred to by their husband’s names (a long-standing gripe of my mother’s). No longer would they be referred to as girls or grandmothers or coeds. Their physical appearance would no longer be part of the story, unless it was somehow relevant—no more pretty, petite, spry, or blonde. Job titles would become gender neutral—no more spokesman or spokeswoman, no more councilman or councilwoman. Chairman and chairwoman would become, simply, “chair.” (This led, a few years later, to a memorable caption under a society section photo of the Junior League, written by an editor with a sense of humor. In the picture, each woman was identified by her committee assignment—and so you had, from left to right, the Fund-Raising Chair, the Refreshments Chair, and the Dining Room Chair.) The memo also stated that we were abolishing courtesy titles. No more Mrs. Anderson, just Anderson. Eight months before, the paper had run a Page One story about Elnora Johnson, the first woman to be elected president of the city council. The first paragraph, the lede, read, “For the first time ever, a Duluth City Council president’s first unofficial act Monday evening was to put on her lipstick.” Under the new policy, that kind of lede would no longer fly.

The room was abuzz, and not everyone was happy. The change had been spearheaded by Jacqui and Suzanne, who had pushed it with top management. They had met with Daly and Knaus for weeks, hashing out the details. Would it be policy for all sections of the newspaper? Or would he society pages be allowed to maintain the old standards? What about obits? What did other papers do? Is this too radical, or are we behind the times? Some of the other young reporters agreed with the change; they said it was overdue. But many of the old-timers hated it, and they responded with sarcasm and anger. You could hear heated discussions all over the newsroom, especially over those gender-neutral job titles; copy editors enjoyed pointing out how artificial it would be, and for a while some of them went to great lengths to put convoluted gender-neutral phrases in print. What are we supposed to call a fisherman? A fisherperson? (We went with “angler.”) What about manhole covers? Huh? What do you call those? (Well, manhole covers,
of course.)

That Sunday, a small box appeared on Page One alerting readers to the new style and guiding them to an awkward column written by the publisher. It was clear that John McMillion wasn’t entirely sold on the policy; his column walked a fine line between respect and begrudgement, but I guess you had to give him credit for not standing in the way. “Since this is the last time I can call you females ‘ladies’ or ‘girls’ in these newspapers, I want to add this passing thought to the ladies and girls out there,” he wrote. “You’ve come a long way, baby.”

“If you are upset about some of these things, call Tom Daly,” he added. “I’m chicken.”

Letters poured in for weeks. The longer ones were usually the angriest. “Father was right: you’re all nuts,” one woman wrote. Another woman insisted that, as a “former frustrated feminist,” she wanted to be referred to by her married name, Mrs. Roger Barton. She was sure that the newspaper would eventually be forced to overturn the new policy, at which time “we can return to the timeless beauty of the well balanced woman of Proverbs. She is all things the liberated woman tries to be, lacking the self-serving.” It seemed a harsh critique of liberated women, to be accused of being self-serving merely for wanting to be called by their own names, and even though the letters continued, the new policy stood.

Excerpted from “News to Me: Adventures of an Accidental Journalist,” University of Minnesota Press.

Laurie Hertzel is senior editor for books and special projects at the Star Tribune, where she has worked for 14 years. Previously, she was a writer and editor at Minnesota Monthly magazine and a writer and editor at the Duluth News-Tribune. She has been a faculty member and speaker at the Nieman Conferences on Writing and Editing at Harvard University, a Knight Ridder Fellow at Duke University in Durham, N.C., and writer-in-residence at the James Thurber House in Columbus,Ohio. She is the co-author of “They Took My Father: Finnish-Americans in Stalin’s Russia,” published by the University of Minnesota Press, 2004. She lives in St. Paul.

Laurie Hertzel will talk about her book at these events

News reporting in Duluth: Adventures of an accidental journalist