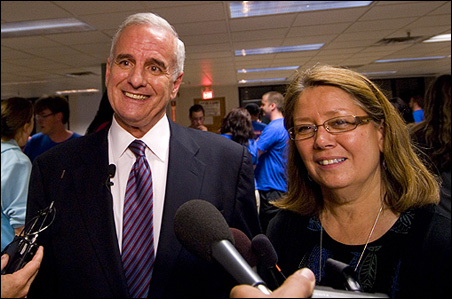 The mood swing was stunning.

As the vote tallies moved away from the metropolitan area and into the northern regions of the state, Mark Dayton had a bounce in his step. His small group of staffers could even be seen smiling.

And he was right on both counts.

But the later the hour became, the more it seemed inevitable. Dayton might win his race against Margaret Anderson Kelliher.

At 11:50, a mighty cheer went up among the strange collection of old DFLers and young staffers who follow Dayton.

After trailing throughout the night, Dayton had taken a slight lead over Kelliher.

Oh what a night of shifting moods.

Early in the evening, the air conditioner was broken, Kelliher had dominated in the metropolitan area as no one in the Dayton campaign had expected. She carried Hennepin County by a 50-35 margin; Ramsey County by 43-34.

They’d expected to lose, but not by that much of a margin.

But St. Louis County, the Range, apparently belonged to Dayton.

The side story in all of this was what a meager showing Matt Entenza made in this race. After spending millions, he was winning just 18 percent of the vote and conceded early, by 9:30 p.m.

The differences between the two campaigns couldn’t have been greater.

From 8:30 on, Dayton was at his very modest headquarters along with maybe 100 supporters and 30 or 40 reporters. He ambled about, issuing statements to the press once in a while, chatted with friends.

“I’ve had two German shepherds at home,’’ he said at about midnight. “They were probably expecting me hours ago. The floors may be a mess, but other than that, I have nothing to do but stay around here with family and friends.”

Meantime, Kelliher wasn’t to be seen at Jax Café, the DFL Party headquarters. Instead, Sen. Amy Klobuchar kept the crowd as positive as possible as the numbers turned on the endorsed candidate.

“It’s going to be a long night,’’ she said, but urged Kelliher followers not to be faint of heart.

Dayton refused to predict victory, but he was gracious in complimenting Kelliher on running a fine race.

Even as his lead grew after the midnight hour, he continued to stay cautious.

“It’s sudden death overtime,” he said, describing the contest as a hockey game. (Like Gov. Tim Pawlenty, recall, Dayton once was a hockey player.)

Dayton also was laying the praise on his running mate, Sen. Yvonne Prettner Solon of Duluth.

“You’re pulling us through this,’’ Dayton said to Solon, noting that she was the only Greater Minnesota resident on any of the tickets.

Dayton, who had seemed so resigned to failure earlier in the evening when the air conditioning was broken and those first results were coming in, said, “I’m not comfortable at all,’’ as the numbers kept heading more and more his way.

Smiling grimly, the man who has been running political races since 1982 in Minnesota, said he’d never get used to the tension of election night.

When the word recount was mentioned as a possibility, Dayton shook his head.

“Haven’t thought about it,” he said.

He did think, however, that it might be premature for the DFL to go ahead with its unity rally on Wednesday morning.

“We shouldn’t be doing that until this is over,’’ Dayton said.

At 12:30 this morning, Dayton’s two numbers crunchers, Brian Rice and Jim Niland, addressed the reporters who were hanging on.

They weren’t declaring victory. But they did point out that they were confident of the numbers that showed an increasing lead. They said, they believed this race would end with Dayton holding a 41 to 40 per cent lead, enough to get the former senator past the need for a recount.

The two did say that they took a bigger hit in Minneapolis, its western suburbs and St. Paul than they’d expected. But that the rally actually began in Dakota, Washington and Anoka counties before he began rolling as the counts came in from the north.

Well after midnight, Kelliher finally did speak to her supporters at about 12:30, telling her supporters that she remained “optimistic” and that she was going home for the night to wait to see what the final results were going to be.

“I respect her prerogative to wait until every vote has been counted,” Dayton said.

Then, he and his staffers started party building.

His staff members insisted there would be no celebration on any account, because only now does the campaign begin, they said.

For his part, Dayton said that all three of the DFL choices were good.

“Now all three of us have the responsibility to bring the party together,’’ he said.

“No,” he said. “I’m going to wait until this is resolved. Maybe we can be on the morning news shows.”

He then thanked his staff and said, laughing, “Your reward is now we can work even harder.’’