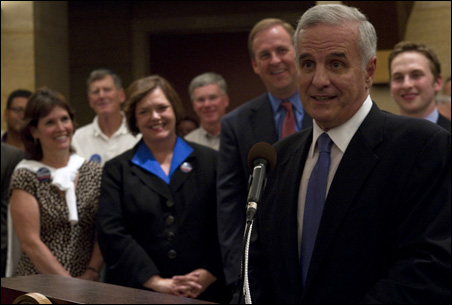 It’s predictable, brutal and a clear sign of the tone of the campaign ahead between Dayton, the DFL nominee, and Tom Emmer.

Shortly after the ad was introduced to the media, DFLers held their unity gathering at the Capitol, which had been delayed from 11 a.m. because of the closeness of the race. The tone of that session was predictably different from the tone of the Republican gathering.

It’s expected that Dayton will take on the ad and the campaign tone on Thursday.

It is amazing how fast things change in politics. A day earlier, many of the people who were sporting red “Kelliher” buttons, were in Dayton blue.

“Not hard,” said Rep. Jeff Hayden, who was a strong Kelliher supporter. “I just explain to people ‘I’ve sat next to Emmer for two years.’ ”

This was a Who’s Who of DFL politics standing with Dayton today. The two senators, Amy Klobuchar and Al Franken, members of Congress. The mayors of Minneapolis and St. Paul. Leaders of the Minnesota House and Senate. Party leaders.

Just hours earlier, all of them except Entenza had been supporting Kelliher, who embraced Dayton when she entered the room.

Kelliher got a huge ovation from her former supporters.

“We unite as DFLers, we unite behind Mark Dayton to beat Tom Emmer in November,” Kelliher said. “I don’t mind being beaten, so much, by a hockey goalie because I’m a hockey mom. … Now is the time that every single one of us stands with Mark. … Minnesotans will have a clear choice in Minnesota. … There’s a clear choice. That choice is Mark Dayton.”

When Kelliher was finished with her speech, Dayton appeared on the verge of tears of appreciation.

For his part, Dayton cracked a joke that the Republicans might use in a future ad. He thanked Klobuchar for being the inspiration of this unity event.

“Sen. Klobuchar is a big improvement over her predecessor,” Dayton said of his own term as U.S. senator. “I know them both well.”

He spoke of calls he received this morning from President Obama and Vice President Biden. He said he told both of them, “Wouldn’t it be different if Minnesota had a governor who appreciates what you’re doing?”

He had a quick word of praise for his general election opponents.

“Both decent men,” he said.

Then, however, he went after Emmer. He attacked him for his comments that a minimum wage amounts to “socialism” and that the fund for families of the I-35 bridge collapse was “feel-good” legislation.

There was much applause and many laughs among the DFLers this afternoon.

But then, there was that ad, which will begin airing statewide Thursday. It blasts Dayton’s record as a senator. “Erratic behavior” is the recurring theme.

Party leaders Tony Sutton and Michael Brodkorb noted that the words chosen for the ad didn’t come from them, rather they came from such sources as Time magazine, which in 2006 labeled Dayton one of the “five worst senators.” It also notes that at one point after 9-11, Dayton, during a congressional recess, closed his Senate office in Washington, citing concern for the safety of his staff.

The ad hints at — but doesn’t directly take on — Dayton’s self-revelations that he’s dealt with both depression and alcoholism.

Sutton denied that the ad was indirectly trying to bring up Dayton’s personal issues.

Clearly, this ad was produced and ready to run before voters even started going to the polls. Sutton said that the party also had an ad ready to take on Kelliher, in the event she had won.

“But we didn’t have one on [Matt] Entenza,” said the party’s communications director, Mark Drake to laughter.

In fairness to the tone of the Republican ad, it should be noted that an organization, Alliance for a Better Minnesota, which is funded by members of the Dayton family, unions and Dayton’s ex-wife, among others, has been blasting at Emmer’s DWI record throughout the primary.

Like Dayton, Emmer has addressed those issues from his past.

There are dangers in such ads. Even though they aren’t done by the candidates — officially there is no connection between the campaigns and the organizations running the ads — they will set a tone for a campaign that is starting ugly and surely will get uglier. There is splashback potential, especially given the fact that, for better and worse, most Minnesotans already know about Dayton.

Sutton said that the ad is an important message to Minnesotans.

Are you saying he’s a coward, a reporter asked.

“Draw your own conclusions,” Sutton said.

Opening salvo sets the tone for brutal gubernatorial campaign ahead