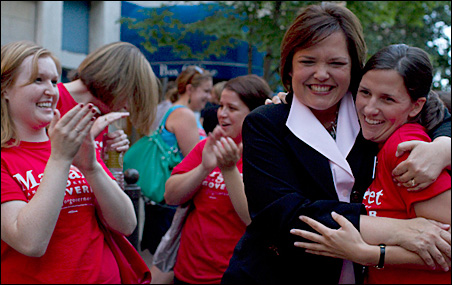 What a unique moment it was in this campaign that started so long ago. Margaret Anderson Kelliher was coming out of the Fitzgerald Theater in downtown St. Paul after Sunday’s final DFL gubernatorial primary debate to find 50 of her supporters still there, wearing sweaty red T-shirts.

Kelliher broke into a smile and hugged people and shook hands.

For months, this has seemed a “buzzless” campaign for all of the candidates. Not Sunday night, though. That was a genuine buzz before, during and especially after the debate.

So noticeable was the passion for Kelliher outside — and inside the Fitzgerald — that Matt Entenza felt obliged to make note of it.

His campaign, he said during the debate, had specifically asked supporters NOT to come to the Fitzgerald, but rather work the phone lines. A Kelliher campaign worker noted the Entenza comment and laughed. “We still had 350 people working the phones [during the debate],” he said.

All three candidates sharp in final debate
On a night when all three of the candidates were at their best, this was Kelliher’s night. This, her supporters said, was evidence of the “ground game” she has been talking about while Entenza and Mark Dayton have been spending millions on television ads.

St. Paul Mayor Chris Coleman, long ago a DFL gubernatorial candidate himself, was among those standing in a crowd of several hundred people outside the theatre before the debate began. He is a Kelliher supporter, but he’s also a political pro. He seemed genuinely impressed by the large turnout of Kelliher supporters.

“When you get a large group of people to come out on a hot, steamy night like this, that’s impressive,” Coleman said.

Another former DFL candidate, Steve Kelly, who also is a Kelliher supporter, said the crowd of people in those red Kelliher T-shirts was proof to him that the Kelliher campaign has done what it needed to do.

“They’ve established a plan based on the resources they’ve had,” he said, motioning to the crowd. “All along they’ve said they needed to build a network.”

Neither Entenza nor Dayton had any show of organized support before, during or after the debate.

But, of course, for weeks the polls have said this race belongs to Dayton, by convincing numbers.

Was this sense of electricity just some sort of election-eve mirage?

Both the Kelliher and Entenza campaigns insist that it’s the polls that are the mirage. Everything comes down to which candidate get his or her voters out. Polling and primaries don’t mix, they said.

Kelliher supporters were filled with optimism. Or grasping at every available straw.

Only the Kelliher campaign worked at getting the support of absentee voters, said Rep. Karla Bigham, a Cottage Grove DFLer who is not seeking re-election. Bigham noted that the Secretary of State’s Office last week reported a larger absentee response — about 25,000 ballots — than in previous governor’s races.

“That’s got to be a good sign for Margaret,” Bigham said.

Rep. Phyllis Kahn, wearing her red T-shirt, said that her door-knocking experience has shown that undecided voters are turning in high numbers to Kelliher.

There remains a substantial number of undecideds out there.

A key question: Who can win?
During the Minnesota Public Radio debate, one man in the audience raised the question that still is most near and dear to the hearts of most DFLers. The man noted that it’s been more than two decades since the DFL has elected governor and asked: Why is that? Who can win this time?

Each of the three candidates answered well.

Said Dayton: “I’ve won running as a Democrat. Unabashed. Those principles are winning principles.” A fair, progressive, tax system is fundamental to Democratic principles, he said.

Kelliher said she’s in the best position to govern. She talked about her ability to bring people of different political points of view together. She talked about her “statewide grassroots campaign,” which will be necessary in November. And then she evoked the Wellstone legacy: “I’m proud to have David Wellstone [the late senator’s son] with our campaign.”

Entenza said the DFL problem in the last two decades has been its inability to focus its message. “We can’t be for 50 things,” he said. “We have to be focused.”

Kelliher, as she had at the KSTP-TV debate a few days ago, poked at Dayton and especially at his proposal to raise taxes on couples earning a taxable income of more than $150,000.

She noted, as she did before, that such a dollar amount could include a cop married to a nurse.

Dayton brushed it off.

And he again pounded on the theme that a progressive tax system — only a memory in Minnesota — is a fundamental DFL principle.

If there had been an applause meter at the Fitzgerald, Dayton would have finished second to Kelliher on moving the needle.

He was sharp and focused. When the candidates were asked, by an audience member, how Minnesota can compete in a changing economic world, Kelliher spoke of the job plans she has laid out on her website, and Entenza spoke again on how the state needs to focus on sustainable energy and education.

Dayton’s answer to the question was direct: “Invest in early childhood education, K-12 and higher ed.”

Kelliher also made her appeal to potential voters, saying she would be the party’s strongest candidate in November because only she can appeal to independent voters and even moderate Republicans.

After the debate was over, Dayton seemed to disappear, Entenza stayed on the Fitzgerald stage, shaking hands with a few people.

For her part, Kelliher somehow managed to get from the stage to the doors from which people were exiting. She stood at the door, like a preacher at a country church, shaking hands with the people as they left. She was energized, engaged.

And then she stepped outside the theater and into the heat and the buzz.

On primary eve, Margaret Anderson Kelliher revs up election buzz before, during and after final debate