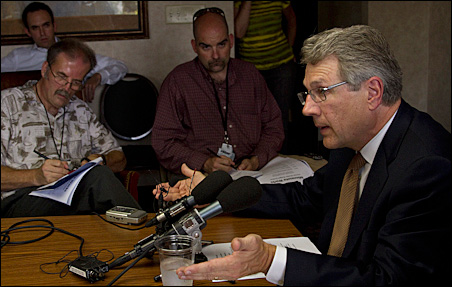 The numbers on the budget outline that Independence Party gubernatorial candidate Tom Horner announced this afternoon are a little squishy.

But the politics are clear.

This budget outline (PDF) offers up ideas that will enrage both the left and the right.

Horner knows that. In fact, he’s almost counting on supporters of the DFL’s Mark Dayton and the Republican Party’s Tom Emmer to express great angst. He wants to paint himself as the man in the middle, willing to step on toes of people on both sides as he tackles problems.

“If people disagree, fine,” Horner said. “But disagree with alternatives.”

DFL, GOP take the bait
And of course DFLers and Republicans took the bait. They both snapped at the Horner outline.

Dayton was first up, offering his criticism within moments of reporters having left the stuffy conference room where Horner unveiled his outline for dealing with the $6 billion hole in the state’s budget.

“Mr. Horner and Representative Emmer both believe that Minnesota’s millionaires and multimillionaires should not pay a single dollar more in personal income taxes,” Dayton said in a statement, “and that everyone else in Minnesota should pay higher taxes instead. That is a fundamental difference between me and both of them in this campaign.”

Republicans took a little longer to respond but were nearly as predictable.

“Tom Horner’s regressive and irresponsible plan to extend the sales tax to clothing and others services like haircuts will hurt hard-working Minnesotans of all incomes,” said the party’s chairman, Tony Sutton, in a statement. “Horner likes to pretend he’s a moderate but he always ends up taking the liberal position by pushing for higher taxes and bigger government. … With Horner and Mark Dayton both promising tax increases, Tom Emmer is the only candidate in the race who will reduce taxes to foster private sector job growth.”

Horner’s outline calls for no increases in the income taxes paid by Minnesota’s wealthiest.

The Republicans are right.

Horner is calling for $2.1 billion in “new revenue” (taxes) to attack the budget deficit Minnesota’s next governor will be greeted with.

Sales tax proposal one key element
Most of that new revenue would come in the form of a broader-based sales tax that would include clothing and some services. Other revenue will come from a racino ($250 million), an increase of a whopping $1.50 increase on each pack of cigarettes and a dime increase on every adult beverage served in Minnesota.

The sale tax proposal is the biggest element and contains the most room for political fighting. Horner would start by decreasing the tax by 1 percent. But that figure is misleading, for in another portion of the Horner outline, counties would each be allowed to increase sales taxes by a half-percent to make up for losses they would incur from cutbacks in funding they currently receive from the state.

In reality, both Horner and his running mate, Jim Mulder, an authority on county governments, believe that most counties indeed would tack on the half-percent, meaning the real sales tax cut would be a half-percent.

“The wealthy consume more,” he said.

To protect the poorest from the broadening of the sales tax, Horner would establish a sales tax credit program of $350 million. At this point, he has no calculations as to how poor a Minnesotan would have to be to tap into that $350 million pot.

When asked for specifics, Horner repeatedly said that he didn’t have an economic team available to create a model that would deal with all the intricacies of his plan.

Is Horner’s plan left or right?

White collar vs. blue collar?
Perhaps the terms “white collar” versus “blue collar” would be more accurate in attempting to define the Horner position. With those terms, this would appear to be a plan that favors those with white collars.

For example, when Horner talks about which services would be subject to a sales tax, he was quick to eliminate lawyers.

“I would not tax legal services,” he said, saying that lawyers face competition from across state lines. He added that other forms of “business to business” services would not be subject to a sales tax under his proposal because of his fear of putting Minnesota businesses at a competitive disadvantage.

When Horner talks about business, he sounds very much like the Republican he’s been for most of his life. He would cut corporate income taxes, which he says are far too high and put Minnesota in a tough spot competitively. He also says corporate income taxes are “regressive” in that they simply are passed on to the consumer.

Yet, he and Mulder sound more like DFLers when they talk about Emmer, who has announced no plan other than to cut government to get out of the deficit hole. (Emmer’s campaign manager, Cullen Sheehan, told MinnPost’s Jay Weiner that Emmer will announce his plan in September.)

From the top of the news briefing to when Horner and Mulder were exiting the building, there were shots at Emmer.

Horner started by asking the Republican tracker on the scene to leave the stuffy conference room at the Kelly Inn, where the briefing was held.

“We’re doing press credentials only,” Horner said to the tracker, meaning news media people only. “If Mr. Emmer would like to sit down and talk, that’s fine with us.”

After the briefing was over, Mulder took a hard shot at what Emmer and his running mate, Annette Meeks, have proposed so far.

A ‘redesigned’ car?
He scoffed at their use of the term “redesigning government.” He compared their way of redesigning to driving a car into a brick wall.

“You’ll have a redesigned car, all right,” Mulder said. “You may even like how it looks. But it won’t run anymore.”

Because the devil’s in the details in budgeting, it’s hard to say how effective the Horner approach would be. For starters, would either a DFL or Republican Legislature pass it?

The big savings that Horner proposed would be not paying back the $1.8 billion school shift in the immediate future. Horner said that was a hole created by “Republicans and DFLers together” and will need to be addressed at a later date. In the meantime, he said, the state should pay schools’ interest on loans they have to take out to survive the shift.

Horner also claimed he could find $2.45 billion in savings via reform and other reductions, but generally he was not specific on how those reforms would generate those savings.

One area the outline included in terms of reform was putting a sunset on all mandates the state government places on counties. In the end, only those mandates that create “positive outcomes” should be brought back, Horner said.

But again, this six-page document was as much a political document as a budget document.

And from a political standpoint, it was effective.

For starters, the little room was filled with reporters. That means Horner and Mulder were generating a lot of news coverage with this event, which is exactly what the frail Independence Party needs.

And then, of course, left and right attacked, meaning more coverage for Horner.

Tom Horner’s budget plan, aimed at the middle, quickly attacked by both DFL and Republicans