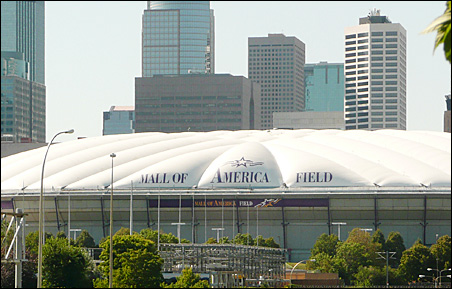 Driving west on Interstate 94 the other day, I took the Fifth Street exit towards downtown, gazed at the skyline and my jaw dropped.

A day later, I drove along Washington Avenue, past the western edge of the University of Minnesota campus, under the crisscrossing overhead jumble where I-94, I-35, Hiawatha and Cedar avenues seem to meet, and the words were unavoidable. They uncomfortably signaled the eastern gateway to Minneapolis.

Seven syllables — “Mall of America Field” — screamed from the puffy white of what I thought was the roof of the Hubert H. Humphrey Metrodome.

Not sure I was seeing correctly, I drove around to the west side of the 28-year-old building that once housed the Twins and Minnesota Gophers football team, but whose lone tenant now are the Vikings.

“Mall of America Field at the H.H.H. Metrodome” it said on the stadium’s façade, with the Mall letters clearly more important than the Dome letters.

Now, this is not breaking news. The Vikings, who will play their first home game of the preseason Saturday, and the Metropolitan Sports Facilities Commission struck a deal last year — days before the Packers-Vikings Monday night game — to rename the playing field at the Dome “Mall of America Field.” The stadium, by law, remains the Humphrey Metrodome.

When the field-naming deal was announced, Minneapolis downtown political and business interests felt they were blindsided by both the commission and the Vikings, although the team’s marketing vice president, Steve Lacroix, told MinnPost that wasn’t the case, and commission officials say they never expected the Mall to buy the name.

The reasons for the deal are clear. As Forbes magazine reported this week the Vikings are 29th in annual revenue among the NFL’s 32 franchises. Corporate naming rights — as much as they still make some of us gag — are now standard among modern stadiums and arenas, even those that were built with public financing. The commission’s agreement to give advertising rights to the team was aimed at maximizing the team’s revenues while it remains in the Dome.

That jarring signage on the outside of the building wasn’t completed until recently, further leveraging a brilliant purchase by the Mall marketers and the invasion of the core downtown by a suburban behemoth. It got me to thinking about the ironies of history, the reality of regionalism and the marriage of two of the state’s most powerful brands — brands that identify the region, not a city, and that promote a state, not only a downtown.

Third downtown
In the late 1970s, during the debate about a publicly subsidized stadium being built in downtown Minneapolis, city leaders expressed a fear of the growth of a “third downtown” in Bloomington and the southern suburbs.

Some plans had the old Met Stadium being refurbished for the Twins and a new Vikings stadium being built in the Met parking lot next to the baseball park. Met Center, the hockey arena, was there already. With the development of freeways, downtown champions — such as John Cowles Jr., the former publisher of the then Star and Tribune — feared a third commercial and financial center, competing with downtown Minneapolis and St. Paul.

The pro sports teams and facilities moved downtown, and what should blossom on the former site of the stadiums? The Mall of America. The third downtown was born, but only after the stadiums moved. The anchor of that third downtown now has a beachhead in downtown Minneapolis.

Change
Don’t get me wrong. I understand the business of sports in the 21st century is business. Just the other day Forbes magazine estimated the value of the Vikings at a mere $774 million. It’s being reported as a 7 percent decline in the team’s worth since 2009, but it is $174 million more than Zygi Wilf and his partners paid for the team five years ago, an increase of 29 percent, a lot better than the stock market has done. Still, the Vikings are ranked 30th out of 32 NFL teams in franchise value.

With the team’s Dome lease set to expire after the 2011 season, Wilf is battling for a new stadium to increase revenues to get out of the league’s cash cellar, although it’s a cellar we’d all love to live in.

I also understand naming rights. It’s part of advertising. The Mall of America is as much a consumer brand as Target or Xcel Energy or TCF Bank, which have paid dearly to have their names on sports buildings in town. The Vikings and NFL are, among many things, the gold standard for marketing platform for many companies.

But this naming rights episode is a reflection of how sensibilities have changed. In the good old days, we named these civic edifices after ourselves or places — the Minneapolis Armory, Metropolitan Stadium, Lexington Park — or special people — Mariucci Arena, the Hubert H. Humphrey Metrodome, St. Paul’s Roy Wilkins Auditorium. Like humans, stadiums get nicknames — the Dome — but the intention in naming it the Humphrey Dome was to honor a great Minnesotan.

On Dec. 23, 1977, weeks before he died, Sen. Humphrey himself wrote a touching letter to the stadium commission thanking it for naming the building after him.

“You can’t imagine how this action has touched my heart and brought a warmth all over me,” he wrote. “I just don’t know what to say.” It was a rare speechless moment for the Happy Warrior.

It meant so much to him and his family that in 1995, a controversy erupted when former Sports Facilities Commission Chairman Henry Savelkoul, seeking ways to maximize revenues for the Twins and other tenants, floated the idea of selling the naming rights to the Dome. Sacrilege, Humphrey backers yelled, including his son, Skip.

Skip Humphrey said then: “The question is, does the public think it should go to the highest commercial bidder or should it reflect our values and what our heroes are all about?”

Countered Savelkoul then: “My thought is, knowing Hubert Humphrey’s dedication to professional sports and the desire for using government resources sensibly, I’m sure he would be supportive of this type of effort. It would be consistent with Hubert Humphrey to have economic value retrieved for the taxpayers.”

Fourteen years later, when the Vikings and commission struck their naming rights deal for Mall of America Field, the team thoughtfully approached the Humphrey family. Attitudes had changed.

Skip and his son, Buck, wrote to Lester Bagley, Vikings stadium development vice president, and MSFC chairman Roy Terwilliger: “We want you to know that we are supportive of the Vikings efforts to maximize revenues over the remaining three seasons of their lease. We believe it is crucial that we help their efforts to be a sustainable and vibrant enterprise now and in the future so that they continue to call Minnesota home.”

History melted into the malling of the Dome.

The power of brands
The other day, the three gubernatorial candidates were asked about Minnesota’s brand. It is not a narrow metro brand or a slice of a suburban brand. The elements are statewide and regional. As much as some Minneapolis city officials and downtown business interests were miffed last year by the landing of the Mall of America on core urban soil, there are some hard facts they have to swallow.

Minneapolis City Council President Barbara Johnson wasn’t thrilled when she heard the Mall naming news, but she is philosophical now. She noted that the city’s promotional arm, Meet Minneapolis, has seen data that show that when out-of-towners are asked what they think of when they think of Minnesota, the Vikings and the Mall of America are at the top of the list.

Said Johnson: “The Mall of America is a recognized brand. It has caused some angst, but their success is our success. And I get it.” 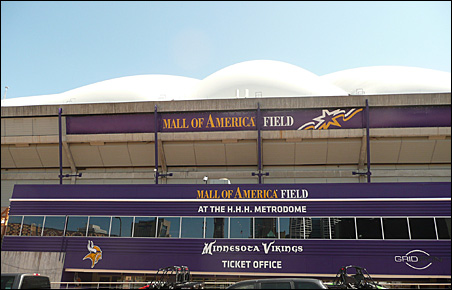 Minneapolis Downtown Council CEO Sam Grabarski notes his board has many regional companies on its board. He, too, admits some surprise when first told of the Mall naming while others in the downtown retail community — hurt by suburban malls — found the Mall’s naming as “confusing.”

But Grabarski said: “Often we view the Mall of America as an asset to downtown as well as a very capable competitor because a lot of national or international tourism that includes the Mall of America as the destination often benefits downtown Minneapolis. We don’t want to forget that. We’re sharing both ends of a light rail line.”

Not to mention, bankers, law firms, lobbyists, accounting firms and other corporate partners of the team, with offices downtown, but business on the other end of the Hiawatha line.

“We’re not that regional,” Grabarski said, with a wry chuckle.

Another matter: As much as downtown interests are biting their tongues about the naming rights, one thing they won’t stand for: the Mall developing a convention center type facility. That will cause a battle, regionalism or not.

Impressions
Neither Mall nor Vikings officials would say what the Mall is paying for the field-naming rights, but it’s probably a couple of million or more per year for the three-year-deal.

Of course, it’s all about getting the Mall’s name on national television and grabbing the eyeballs of those of us driving along the freeway.

“With our name on top of that Dome, even if you may not go inside of it ever, you can get a view of it,” said Maureen Hooley Bausch, the Mall’s executive vice president for business development. “It isn’t so much about downtown. That just happens to be where that building is located. If it were only about trying to reach downtown people, we wouldn’t have done [the naming rights deal].”

Here’s why she did it: According to preliminary results from last season, with Vikings TV and radio ratings soaring, and with a gaggle of Monday and Sunday night nationally broadcast games, auditors have determined that there were more than 100 million impressions of the “Mall of America Field” name beamed into the minds and memories of viewers, listeners and readers around the globe.

“Top of mind” is the term Bausch uses.

She said she’s sensitive to the name change and even to the sports history of the Mall site.

“We’re very nostalgic out here,” Bausch said. “We know we were built on sacred sports ground.” The Mall still houses Met Stadium memorabilia within its walls. “We understand the history of our site and their site.”

For now, the places are joined at the football, marketing and regional hip.

Here’s confirmation. The other day some folks from somewhere took that same Fifth Street exit I did — the one with the beckoning “Mall of America Field” signage — and pulled into the secured parking lot on the east side of the Dome. They told the guard there they wanted to park . . . and shop.

These people saw the sign on the Dome’s puffy white roof and assumed the Dome was the Mall of America.

They must have been from Green Bay.

They’re even changing the name of the hot dog at the Dome. The Dome Dog is dead.

The Vikings said today Sheboygan Sausage Co. hot dogs and brats will be exclusively served at Mall of America Field. No more “Dome Dog.” A quarter-pound hot dog will be called the “QB Dog.”