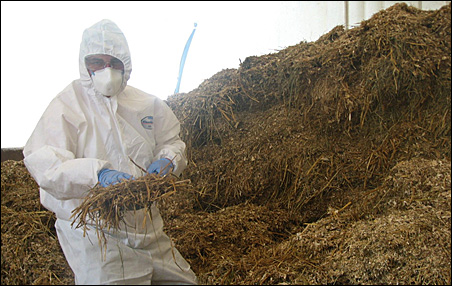 George Johnson spends a couple hours every day at the State Fair up to his knees in manure and surrounded by hot air.

No, he’s not involved in the political campaigns.

Johnson is an environmental scientist charged with the unenviable task of collecting samples of some of the Fair’s most aromatic by-products: horse droppings, cow pies, sheep sludge and chicken poop. Every day at the Fair.

He also pokes around in human food waste, too, things like corn cobs, half-eaten corn dogs and tiny doughnuts that might have spilled onto the street.

The goal: gather enough material samples for later testing to determine if the waste generated during the 12 days of the Fair might be sufficient — or potent enough — to fuel a waste-to-energy system at the nearby St. Paul campus of the University of Minnesota.

An anaerobic digester might be the logical result. In not-so-technical terms, it would capture the methane gas created by the microbes that break down organic matter.

The gas then can be burned — like natural gas (and you can say that it really is “natural” gas) — and used to generate heat and electricity. With energy prices sure to soar, the University is very interested in sustainable ways to heat some of its older buildings on the St. Paul campus.

Another benefit: siphoning off and reusing the methane, which is 25 times more potent than carbon dioxide in the global-warming scenario.

But lots of testing is needed to be sure the mix of waste at the Fair will be effective fuel for a digester. So they called on Johnson.

Moon man
Johnson is a senior scientist at the SEH engineering firm, which is working with the U of M and the Fair to see if the waste is reusable. Johnson’s firm is blogging about the project.

With lots of experience in the field, so to speak, Johnson was a natural. He’s worked on waste sampling in the past, checked soil, sludge, garbage, even hazardous waste.

“I’m somewhat of an expert in wastes,” he says with a smile.

He shows up every afternoon during the Fair at the Forage Barn, on the far southwestern side of the fairgrounds, behind the animal barns in the furtive edges where city folk rarely tread. He checks in at a small desk surrounded by piles of hay and straw bales.

There he dons an environmental-hazard protection suit — a moon-suit to us laymen — which has two purposes:

It protects the samples he’s about to collect from cross-contamination, although it’s hard to imagine that anything Johnson might accidentally bring into the manure pits on his street clothes would make a difference in the poop make-up, but he’s a scientist and there are protocols.

And the suit protects him from the potent biohazards. It usually works, although Johnson said he was stricken with a mild gastro-intestinal malady early in the Fair, likely the result of his probings. 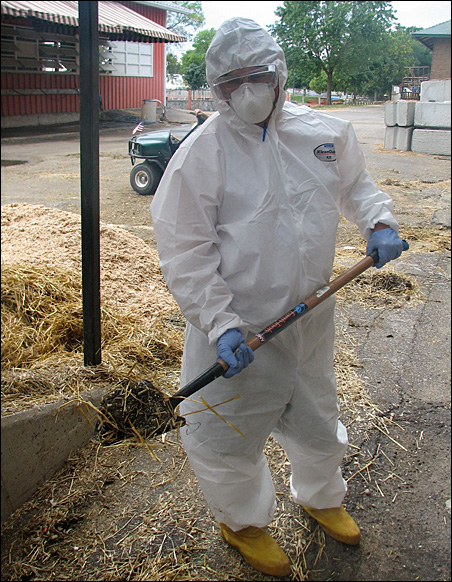 The suit, though, often creates a stir at the Fair when people wonder if he’s there to investigate a disaster, as he rides a Fair cart between the three manure pits hidden fairly discreetly behind the major animal barns.

It’s hard for him to talk while wearing the bio mask, so Eric Haselman, a State Fair employee in the sanitation department who is assigned to help Johnson — driving him between poop points — often explains to curious fairgoers that there’s nothing to fear: It’s a science project.

“They think the worst, that it’s a disease or something bad,” Haselman said. “I tell them he’s just collecting samples and wears the suit to maintain the integrity.”

Quite a mix
Studies of organic Fair waste over the years has shown that about two-thirds comes from the animals and one-third from disposed human food, so Johnson follows that proportion in his samples. He’ll gathers about seven one-gallon bags from the animal pits, and three from the food waste area.

Starting in a manure pit behind the horse barn, he digs into several areas of the pile, going deep to get a good sampling. The dried stuff on top isn’t so good for testing, he said. He’s got to go deep.

He shovels small portions from several areas into a bucket and then mixes it. By hand. Wearing gloves. Then he puts the mixture into the gallon bags, marked by animal type and day.

“The digestion of the organic material by the microorganisms is like cooking a stew or soup — the ingredients aren’t always exactly the same. And the methane coming out of the process is like the steam coming off the stew,” he said.

The gas coming off the fermenting mixture is low-grade methane that can be used for some energy conversions, but it also can be treated, cleaned and filtered for more sophisticated uses, he said.

Johnson changes gloves and heads off to the swine barn pit, where he mixes and matches another gallon of goop. Then the cow barn. He likes to save the worst for last. “Cows are messy animals, with liquid and smelly manure,” he said.

With the animal samples complete, Haselman drives Johnson up to the Fair’s sanitation building, another spot off most fairgoers’ radar. It’s northeast of the grandstand, near Northern Tool, if anyone wants to expandhis or her Fair itinerary.

There Johnson delves through the afternoon’s serving of food waste and finds a nasty surprise.

“Someone had upchucked a lot of food, and it got into the mixture,” he said. “There’s some food value in it, but it’s sure disgusting.”

Farm roots
Johnson spent time at a cousin’s family dairy farm while growing up, so he’s accustomed to the smell and ambience of manure, helping settle any questions about which scientist was right for this job.

“I won’t say I drew the short straw, but when the straws were drawn, nobody else was in the room,” he said.

Johnson said his firm is donating his sampling services to the U and the Fair for this project, although it may not be as altruistic as it sounds. “The hope is that it will evolve into a business proposition that will make my company some money and save money for the Fair and the University,” he said.

After each day, Johnson’s bags of goodies will be frozen and later examined by University researchers. The chemical composition will be analyzed and used to help determine the design of the proposed energy system that likely will be used to heat and run the greenhouse buildings at the campus.

Officials will need this specific information when they seek money to build the project from the state and federal government. Optimistic estimates put a one- to three-year timeline on the proposal.

As for Johnson, he’s been a big State Fair guy all his life, attending every year, often more than once, to roam and eat and people-watch. His experience this year won’t change that.

“I’ve always wandered through the animal barns and the DNR building, and my guilty pleasure is the deep-fried cheese curds. My wife loves the flower shows, so we always go there,” he said.

“This year has certainly expanded my view of the Fair, spending so much time in parts of the Fair most people never see.

“And it surprises me how oblivious most people are to what’s happening on the back side of the Fair.”

And you thought your job stinks? Check out his State Fair work