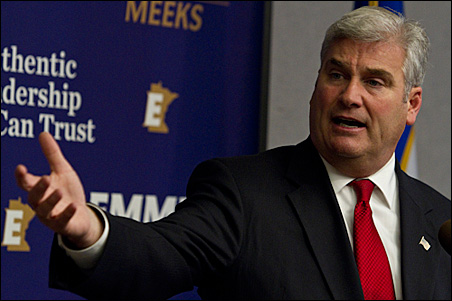 Tom Hauser, the respected political reporter for KSTP-TV, had a furrowed brow. He was examining Rep Tom Emmer’s seemingly balanced budget plan, with all the columns, numbers and details and the comparisons (PDF) with his opponents’ plans.

Emmer also offered two other supporting documents — one outlining his 2012-13 budget targets (PDF) and a second comparison of his plan and those of his opponents (PDF).

Hauser, meanwhile, was listening intently this afternoon as the Republican candidate outlined the specific amounts of the state budget he would propose to cut, if and when he defeats DFLer Mark Dayton and the Independence Party’s Tom Horner and becomes governor in January.

Emmer was talking his passionate campaign talk of “living within our means,” and no new taxes, of the state having enough coming in to pay its bills going out, about how local governments need to more wisely spend tax dollars, and how public employees who retire or leave their jobs won’t be replaced over the next few years.

His staff distributed a handout titled “The only honest budget plan from the only straight-talking candidate.”

Dayton’s tax plan falls short
Maybe it was a jab at DFL candidate Mark Dayton, because it came about the same time reports began circulating that Dayton’s income tax increase proposal to balance his budget just doesn’t add up. His spokesperson said the DFL candidate will have to go back to the drawing board. [PDF]

The Republicans jumped all over Dayton noting that a Minnesota Department of Revenue analysis showed that “Dayton’s numbers don’t add up.”

So, now, Hauser and other reporters were speed-reading Emmer’s plan. In it, Emmer proposes trimming higher education funding by more than $400 million from the state’s projected 2012-2013 budget. And he showed that his health and human services budget would cut $2.25 billion from state projections. And state aid to local governments would get trimmed by more than $1 billion. And state agencies would get reduced by more than $700 million. He called these his “spending targets.”

Through all these cuts, Emmer would — in his view — cover enough of the projected $6 billion deficit from the state budget to balance the whole darn thing.

But how exactly, those pesky reporters were asking, would he make the cuts — which programs, which aid to cities? How? Where? Some reporters were asking about the specific cuts to specific programs within those massive trims from the state’s $31 billion biennial budget, which is expected to grow to $38 billion.

Hauser, stroking his chin 15 minutes into Emmer’s Capitol news conference, got to the nub of the apparent flaw in Emmer’s presentation.

Different perspectives on Emmer budget
“So, just to be clear,” Hauser asked politely, “we know the numbers that you’re trying to get to — we just don’t know exactly how you’re going to get there.”

Replied Emmer: “I suppose that’s one way of looking at it. The other way of saying it is we are respecting the process at the same time.” By process, he meant the give and take with the Legislature.

But his bottom line. “You’re going to have to live within your means … If we’re in the governor’s office, obviously, we will provide detail …”

He left K-12 funding in place and said public safety and justice spending would be saved.

But Emmer wanted to make it clear that he would get to those details within his cuts by working cooperatively with House and Senate.

“We simply cannot sustain health and human services growth at the pace that it’s at,” Emmer said. “What goes into those components, we’ll save that discussion as we go forward … We are open to discussing with Republicans and Democrats within those budget numbers: ‘What would you do and how would you like to do it?’ . . . Government cannot simply spend what it wants to spend.”

Still, the Legislature should know that when it came to health and human services, the proposed $2.25 billion cut was a gift.

“We could have done less [in funding] in that area and chose not to,” Emmer said.

Emmer protested to the gathered media mass: “You wanted the details. I have given you more details than anybody else.”

Candidates quick to react
Of course the reaction was swift.

From Dayton’s spokesperson Katie Tinucci: “Rep. Emmer’s plan will cut funding for Higher Education by 14%, K-12 Education by 14%, and Local Government Aid by 33%. He will thus cause huge increases in property taxes, higher college tuitions and seriously damage the quality of education throughout Minnesota. Furthermore, his drastic cuts in funding for Health and Human Services will restrict access to essential health care for those most in need.”

IP candidate Tom Horner, in an interview with MinnPost, was a bit more philosophical.

He called Emmer’s budget “designed for people who think Minnesota is on the decline and think that it’s OK to be on the decline. I think it’s a budget that undermines our opportunity to grow.”

He added: “This is a budget that is about Tom Emmer’s political future and ideology and not the future of the state.”

Horner said reducing higher-ed funding and research money would put Minnesota at a disadvantage in economic competitiveness. Horner, referring to Emmer’s proposed health and human services cuts, noted that at a health care forum last week, Emmer “made it clear his intention is to transfer [state health costs] to charity care … I think this is a budget that does that.” But “charity” case costs are transferred to others in increased premiums, and to employers, Horner said.

“I think it is a budget that is all about 2011,” he said. “It’s one more short-term focus … We’ve tried this short-term cut-and-paste and it doesn’t work … We need long-term solutions.”

Added Horner: “I think the bottom line is now we have a very clear picture of the priorities of the three candidates and how we would govern the state.”

But back to Emmer, for this was his day — and his plan with no new taxes.

Horner wants to broaden but reduce the sales tax. Dayton’s income tax plan, raising less than he originally had estimated, seems to have fallen about $ 2 billion short of closing the budget gap.

As GOP chairman Tony Sutton said in a statement about Dayton’s plan:

“Today’s estimates from the Department of Revenue confirm that Mark Dayton has no credibility when it comes to balancing the state’s budget. Dayton repeatedly promised that his tax hike on the ‘rich’ would raise $4 billion but now we know it will raise less than half that amount. Given that Dayton’s numbers don’t add up, it’s time for him to come clean with Minnesotans and reveal what other taxes he will raise on hard-working Minnesotans.”

If it wasn’t clear before today, it is now as Rep. Emmer succinctly put the entire campaign into perspective with exactly seven weeks until Election Day.

He said his jobs and education and budget plans show Minnesotans one clear thing: “You have a choice.”