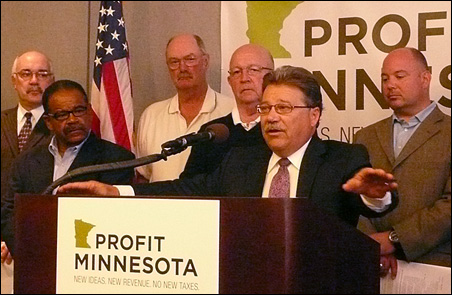 And in this corner, vying for the votes of legislators on the always sticky — but increasingly center stage — issue of gambling, are the bar and restaurant owners of Minnesota, and the charities that say they depend on them.

In that other corner in what’s sure to be a gaming free-for-all for the 2011 Legislature and new governor stands Canterbury Park, with its horse industry backers and its dream of a full-fledged casino onsite in Shakopee.

The political gloves are about to come off, so that everyone can pull a tab or push a button in hopes of winning some walking-around money.

At first glance, the proposal offered today at a Capitol news conference by a new advocacy group called Profit Minnesota seems a bit more populist, more diverse, more decentralized and less in-your-face to the Indian tribes that control casinos in the state than the Canterbury racino effort.

Gambling bucks easy money?
Still, whether it be a slot-machine-filled gambling parlor at Canterbury, a mere four miles from the front door of the Mdewakanton Sioux’s Mystic Lake complex, or electronic pulltabs in local bars from Askov to Windom, here’s the reality: Lawmakers and the new guv are going to be looking for cash under every rock and mattress come January, and gambling bucks are easy bucks, more or less.

“This is the place for Minnesota to go,” said Sen. David Tomassoni, DFL-Chisholm, noting that a new plan to add electronic games and pulltabs to bars and restaurants can bring jobs back to the hospitality industry, give new-found money to local charities and help the state’s budget.

Tomassoni joined his Iron Range colleague, Rep. Tom Rukavina, DFL-Virginia, today at a news conference with the leaders of bar and restaurant owners — and with advocates for charitable gaming. The two lawmakers said the time has come to allow state-regulated bingo, electronic pulltabs and mini-slot machines into the 3,200 or so drinking and eating establishments in the state where such small-time gambling is already under way, but with 1980s technology.

Despite the need for money in the state’s general fund, Profit Minnesota, citing state figures, said that the receipts from bar gaming that go to charities statewide are down $400 million since 2004; the economy and the no-smoking ban in 2007 are the alleged reasons. Bar owners and charity leaders, from St. Paul to Zimmerman, today talked of the stresses of not being able to support local causes with the decline in gaming.

Rukavina livened up the news conference — as he does most events — when he walked to the lectern and brought the issue to clarity.

On charitable gaming: “You know, anytime there’s a catastrophe or fundraiser in a small Minnesota rural town or these little neighborhoods [in the Twin Cities] . . . they don’t go to Lowe’s or Kmart or Walmart to get money, They go to these folks and the other small businesses” for donations.

As for any gubernatorial candidate who says the state doesn’t need more revenues — presumably Republican Tom Emmer — Rukavina said, without naming names, that person “is either a liar or nuts in the head.”

Added Tomassoni: “This is one of the places where we can actually raise some money and do it without raising any taxes and allowing people to make their own decisions, whether or not to spend the money.”

The numbers
Here’s the deal, and here’s the pitch from Profit Minnesota:

• Bars and restaurants — 3,200 now — would be allowed to offer five electronic hand-held pulltab or bingo devices.

• According to estimates produced by the State Gambling Control Board, those devices would generate an additional $96 million in tax revenues and $120 million for charities than is already generated by pulltabs.

• Plus, video slot machines added to the mix, and controlled by the Minnesota Lottery, would generate, according to its projections, about $170 million to the general fund and $113 million to the Environment and Natural Resources Trust Fund in the first year.

• According to Profit Minnesota data, their retailers statewide would pocket $273.5 million annually and charities would net $229 million.

• As time wears on, the state general fund could see more than $600 million a year from more electronic games.

Now, as we know, numbers on gambling and entertainment spending are always head-scratching. As with most discretionary dollars, there’s a tendency for the money to move from one venue to another, rather than to represent actual growth in spending.

Indeed, for political purposes, Profit Minnesota is downplaying the “expansion of gambling” sound bite. Tomassoni noted — and all advocates are explaining — that the introduction of electronic pulltabs and electronic bingo will simply be replacing paper pulltabs and paper bingo.

“People ask me, ‘Isn’t this an expansion of gambling?’ ” said Tomassoni, who’s been working on this issue for 16 years. “I have to say it’s more than anything a replacement of gambling.”

His reasoning: the pulltabs already exist — “You can’t live anywhere in the state without being within 60 miles of a casino,” and every convenience store sells Lottery tickets. “It’s not as if we don’t have gambling spread out all over the state,” he said. If opponents are concerned about the social costs of compulsive gambling, funding will be included in any bill to address that, he said.

But, if it’s just replacing what exists in most cases, why will it generate such a spike in state revenues as Profit Minnesota is claiming?

“I think it will grow the market,” Tomassoni said, because the handheld machines will motivate bar patrons.

Tom Barrett, executive director of the Minnesota Gambling Control Board, said, “the expectation” is that the increased interest in electronic gaming will increase playing at bars, “especially among younger people.”

One note: This is a campaign that doesn’t so clearly confront the Indian casino empire. There were no code words today, no mentions of the state’s compacts with tribes, no mentions of the competition four miles away. The message is more a merging of key campaign issues: the dire straits of small businesses, the needs of local charities, the statewide nature of the plan and the perfect storm of a state budget in crisis.

Tomassoni said this proposal won’t threaten the Indian casinos, because “people don’t go to bars to gamble. They go to bars to socialize.”

Political and media clout
As folksy, grass-rootsy and heartfelt as the organization seems to be, it is made up of a handful of well-organized business associations, such as the Minnesota Licensed Beverage Association, the Minnesota Restaurant Association and Hospitality Minnesota, which represents hotels, motels, resorts and campgrounds.

Among the lobbyists for MLBA is the powerful McGrann Shea law firm — led on this issue by Joe Bagnoli and Sarah Psick — the office that has long represented the Metropolitan Sports Facilities Commission and Minneapolis city interests. Working on the social media front is the up-and-coming, aggressive St. Paul-based Strategic Field Concepts shop, which is going to be active with other grass-roots efforts this political season.

SFC already has posted a web commercial that it hopes will go a bit viral. But these days, videos aren’t the only thing spreading like the migraines in legislative circles. Gambling talk is, too.

Odds are, Profit Minnesota’s backers and racino backers will be vigorously hunting the marbled halls of the Capitol come January, cornering politicians who need to gather cash to pay the state’s bills.