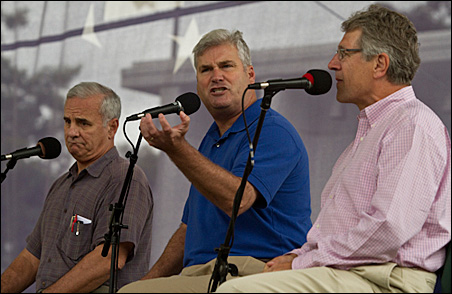 MinnPost photo by Terry Gydesen
A somewhat blustery hour on a blustery day: Gubernatorial candidates, from left, Mark Dayton, Tom Emmer and Tom Horner square off at the Fair.

They staged a gubernatorial debate this morning that was distinctively State Fair-ish: lots of hootin’ and hollerin’, hundreds of people in baseball caps, a silent protest on the side, an appearance by Minnesota icon Garrison Keillor, and, for good measure, as if a Fair ice cream cone, there were even sprinkles on top.

A touch of rain, along with wind and temperatures in the high 50s, offered a harbinger of autumn and, in light of the rhetoric from the big platform in Carousel Park, a signal of a full-throated political campaign that has 60 long — and even windier — days to come.

Despite the climate change, the themes of the debate sponsored by — and aired on — Minnesota Public Radio seemed to stay the same.

DFL candidate Mark Dayton, who came off today as the most subdued — and, as always, the most statistics-laden — of the three candidates, spoke of his vision of making Minnesota’s tax policy fair by increasing income taxes on the state’s richest and of making investment in the state’s education system his priority.

Republican Tom Emmer vowed to raise taxes on no one and to reduce government. He said he wants to change the way the state has been doing things for the past decade, even though he’s been in the Legislature for the past six years with a Republican governor at the helm.

Independence Party candidate Tom Horner must have uttered the word “leadership” more times than the guy on the Midway barked, “Everybody wins a prize, step right up!” Horner, however, also seemed to bring the most consistent passion to the 52-minute session. Of course, when you’re third and tracking 13 percent in the polls, you need to.

Dayton and Emmer each wore short-sleeved polo shirts in the chill. Horner, also trying to be different, wore a long-sleeved dress shirt.

Wrasslin’
Earlier in the day, Brian McClung, Gov. Tim Pawlenty’s former deputy chief of staff and press secretary, told the Star Tribune that this series of debates — eight so far — have begun to look like “a professional wrestling match, where each move that comes at them is anticipated and they have a retort ready to go.”

McClung was right, except there weren’t too many retorts, just a basic restating of their positions.

Early on, however, Horner was beating up on Emmer for having not yet released a budget-balancing plan. Meanwhile, as always, Emmer was critical of Dayton’s call for higher income tax rates for rich folks and of Horner’s call for a broadening of the sales tax, including its extension to clothing.

Said Dayton (with a stat included) to Emmer: “This is the 126th day since you’ve been endorsed by your party. You still haven’t answered that question: ‘How would you eliminate a $5.8 billion deficit?’ “

Emmer said earlier this week his plan — or a series of proposals — will be released next week.

“And until you provide a plan, I think it’s really hypocritical for you to be questioning ours,” Dayton said.

Not about taxes
Other topics were raised. In response to a question from the audience, Horner and Dayton said they would both support anti-bullying legislation; Emmer said he needed to examine such proposals more closely and suggested it was up to parents first to monitor such dangerous behavior.

Gov. Pawlenty’s opposition to Minnesota accepting $263 million in federal aid for health care for the poor and elderly was raised: Dayton and Horner said the state should take it; Emmer said he had to read up on “what strings are attached … You can’t just take it because someone in Washington says it’s good for you.”

Dayton called taking the federal dollars “responsible financial management” and said it would help to reduce the state deficit. Horner said it was money that Pawlenty and Republicans in the Legislature thought was good enough to take earlier this year to balance the budget, but suddenly the money “has baggage tied to it.”

With that, Emmer appealed to his supporters in the crowd and asked what they thought of the way government functions.
“Folks, is what we’re doing right now working?” he hollered. 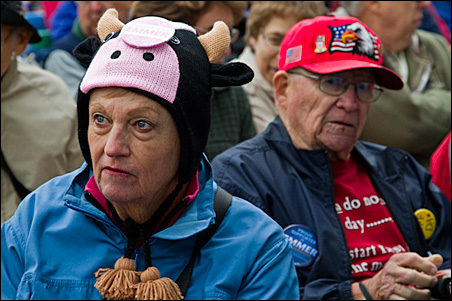 MinnPost photo by Terry Gydesen
More than 500 onlookers, many bundled up for the cool day, gathered for the debate.

Countered Horner, jumping at the opportunity, and asking another question to the assembled: “Is leadership putting out a specific plan that people can have a sense of, can vote on and can understand where you stand?”

That drew a sizable round of applause.

For his part, Emmer’s stance could be summed up in his closing statement about his opponents.

This sound bite brought the longest extended boos of the event from everyone, it appeared, but Emmer fans, and it forced the be-gloved debate moderator Gary Eichten to calm the masses.

Horner urged the 500 or so onlookers to show their own leadership, presumably by fending off both traditional party candidates in favor of his third-party option.

“I need you to be the leaders as voters that you want for a leader in the governor’s office,” he said.

Sideshows
By the way, as at all State Fairs, there were a couple of sideshows. One was offered by Ken Pentel, the Ecology Democracy Party’s candidate for governor — who, it’s fair to say, is campaigning below the political radar. Pentel, a former Green Party candidate, was handing out leaflets to members of the media before the debate, seeking coverage.

While the other candidates were on the big stage, a couple of strategically placed supporters on the outskirts of the audience could be seen holding handmade signs; “Let Ken Debate.”

Meanwhile, Keillor, creator and star of public radio’s “Prairie Home Companion,” seemed to purposely find Dayton after the debate and chat, in public view, with the DFL candidate. Keillor was slated to be Eichten’s guest after the politicians.

Keillor, a certified liberal, dodged reporters’ questions about whether he was supporting Dayton — “My mind is open” — or if it was true he was to hold a fundraiser for Dayton. “I’m considering it very seriously,” he said at MPR Day following today’s debate hour at the blustery and always above-average Minnesota State Fair.