Every so often it’s useful to turn around the political megaphone and let voters speak.

That’s especially true when it comes to taxes. We’ve had an earful of tax talk from candidates, much of it presuming to tell us what voters want.

Now, a couple of recent polls give us a reality check on the rhetoric.

Despite all of the animosity aimed at government this year, Americans are not as infected with anti-tax fever as they were a few years ago, according to polling results from the Pew Research Center. 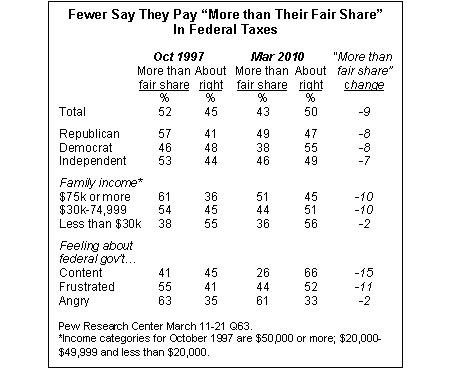 Closer to home, another poll found that even a good share of Republicans say it’s time to bring more revenue into state coffers via the income or sales tax.

In this fourth article of MinnPost’s series on taxes, we will explore these findings.

And more of them (45 percent) said they preferred raising taxes on the affluent over expanding sales taxes to clothing (favored by 22 percent).

Most Minnesota readers already know this political background and can skip to the next paragraph: Increasing state income taxes on the highest earners is the centerpiece of the fiscal proposals put forth by Mark Dayton, the DFL gubernatorial candidate. Tom Horner, the Independence Party candidate proposes to expand the sales tax. Tom Emmer, the GOP candidate, proposes no tax increases, but a range of analysts have said his proposed cuts in aid to local governments would have the effect of driving up property taxes.

One interesting finding in the MPR/Humphrey poll is that one-fourth of Republicans — even one-fifth of the Minnesotans who identified themselves as Emmer supporters — favor increasing taxes on the more affluent. As for independents, 54 percent supported that move.

An additional fifth of Emmer voters and Republicans supported broadening the sales tax.

Of course, that means that a substantial majority of Republicans in Minnesota favored neither form of tax increase. And many of them hold the position with enough intensity to influence the races.

Getting your money’s worth
Exactly half of those polled in the nationwide Pew survey said they pay about the right amount of taxes considering what they get from the federal government. That’s up from 45 percent in a similar poll conducted in 1997.

What’s more, 3 percent of the people Pew polled this year said they are paying less than their fair share of taxes.

In other words, 53 percent had no beef with the tax levels. That compares with 43 percent who said they pay more than their fair share.

Here’s the surprise: Republicans (47 percent) and Independents (49 percent) were almost as willing as Democrats (55 percent) to say they pay their fair share in taxes considering what they get in return.

And a slender majority (52 percent) of those who expressed frustration with government said the same thing.

The notable exception was Tea Party sympathizers. Just 41 percent of those who said they agree with the Tea Party’s agenda also said they pay the right amount of taxes.

Pew’s Sept. 20 report on attitudes toward taxation was based on national surveys conducted in March and September this year.

Taxing the wealthy
One finding in the Pew report speaks directly to a point of political division in Minnesota this year: Should the wealthy pay more taxes? 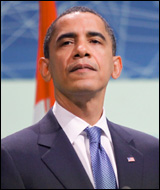 On the national level, President Barack Obama and most Democrats (with a few notable exceptions in Congress) favor repealing the Bush tax cuts for top income earners but renewing them for middle-class and low-income Americans.

A USA Today/Gallup poll also found that a solid majority of Americans favor letting tax cuts enacted during the Bush administration expire for the wealthy. Just 37 percent of those polled by Gallup wanted the cuts kept in place for everyone. Gallup’s nationwide poll was conducted Aug. 27-30.

Turned a corner on taxes
The pollsters don’t speculate what’s driving this broader acceptance of taxation. I’m guessing it’s a concern for the deficit. But deficit hawks were sounding alarms in the late 1980s and early ’90s, too. And Americans said they were taxed “too high” by roughly a two-to-one-margin from the early ’60s to the early ’90s, the Pew Report said.

“Roughly two-thirds of Americans said in polls they were taxes too highly during the administrations of (presidents) Nixon, Reagan and Clinton,” Pew said.

Of course, Pew points out, “just because most Americans are good with their current tax rate doesn’t mean they would turn down another tax cut or encourage an increase.”

In March 2009, at the outset of the Obama administration, fully 82 percent said it is the right thing for the government to reduce taxes for middle- and lower-income households.

Sharon Schmickle covers science, the economy, international affairs and other subjects. She can be reached at sschmickle [at] minnpost [dot] com.