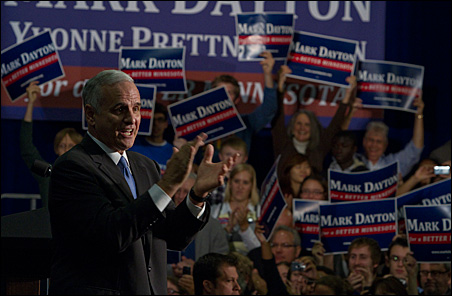 Speaker after speaker attempted to evoke the spirit of ’08 at a Mark Dayton for Governor rally this morning at Macalester College.

From Minneapolis Mayor R.T. Rybak to Vice President Joe Biden — and a bunch of speakers in between — there was talk of how Dayton specifically and Democratic candidates in general need to re-ignite the enthusiasm voters showed for candidate Barack Obama two years ago.

“Do for us what you did two years ago,” Biden implored. “Pick up the phones, knock on those doors.  … If we turn out average people, we will win.”

The zeal of ’08 is a too-high standard for this, or any other, gubernatorial race to meet.

Enthusiastic crowd but subdued buzz
Today, a huge curtain cut the field house in half. The portion of the gym in use was crowded with an estimated 1,100 supporters. Most in the crowd were enthusiastic, though any buzz level was subdued.

Biden was to appear at 10:30. The crowd had begun to gather two hours earlier.

Sens. Al Franken and Amy Klobuchar did a good job of revving up the gathering — for a 10:30 appearance.

Franken even got laughs, when he urged people to spend their free time working for Dayton’s election in the last days of this campaign.

“Many of you have families,” Franken said. “Ignore them.”

“Oh, take care of the little ones.”

Klobuchar ended her fiery speech by saying, “There’s energy in here.  … Take it outside this room.”

Then came a long, long wait.

Biggest rally yet in governor’s race
But measured for what it was, a rally for Dayton, a gubernatorial candidate who doesn’t score high on charisma charts, this was a successful event. It was the biggest rally for any of the gubernatorial candidates in this race. The turnout was big enough to fill the room and, importantly, more than half of the spectators appeared to be college students.

Perhaps the most interesting element of the event was that contrary to the belief that Democratic candidates would run from the president, all on hand praised the accomplishments of the Obama administration in its first two years.

An aside: The one Democratic metro area candidate who was not at Macalester was Tarryl Clark, who is running in the 6th Congresional District against incumbent Michele Bachmann. Could it be that Clark, running in a conservative district, didn’t want the association with the Obama crowd? All Klobuchar said about her absence was “Tarryl Clark couldn’t be here today.”

Biden’s speech was far more about defending the administration’s record than it was about Dayton. He ripped the Republicans’ Pledge to America, saying it would drive the country deeper into debt than it went under the administration of President Bush.

“We’ve seen this movie before,” Biden said. “We know how it ends.” 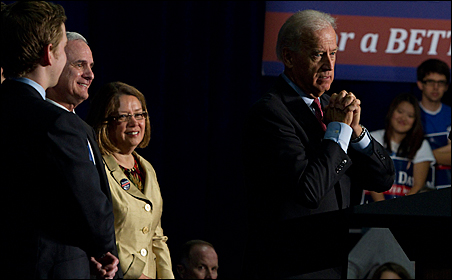 The vice president has an interesting speaking style. He tends to wander on, quote his father often and sometimes drop into a monotone. But just about the time eyelids grow heavy, his voice changes. Suddenly, he’s speaking loudly, passionately, and he moves the crowd. Then, it’s back to quoting his dad again.

“Unlike his opponents,” Biden said, “he seems to understand that education matters. … Can you imagine what Hubert Humphrey would be thinking about Minnesota schoolchildren going to school four days a week?”

And he finished with a flourish, asking the crowd to support Dayton.

For his part, Dayton kept his introduction of Biden brief, promising that as governor he would be “partners with all of you in Washington.”

Dayton did take a shot at outgoing governor Tim Pawlenty, saying that by rejecting various federally funded programs, Pawlenty has “turned his back on Minnesotans for his own political ambitions.”

Outside the hall, Republican Party Chairman Tony Sutton said he was glad to see Biden in Minnesota.

“It’s good in this summer — I mean, bummer — of recovery to see him put his arm around Dayton.”

Outside the field house, before the rally began, Michael Brodkorb, the deputy Republican chairman, and Mark Drake, the party’s communications director, ran into Brian Melendez, the chairman of the DFL.

“Are you going to put Horner on stage?” Drake asked Melendez.

“We’ve got him on tape, saying he supported Obama,” said Brodkorb.

All smiled and went their separate ways.

Following his speech, Biden attended a Dayton fundraising lunch in downtown St. Paul. On Wednesday, former House Speaker Newt Gingrich will be in the state to raise money for Emmer and the Republicans.