Remember what your frustrated mother used to say? “If I want it done right — I’ll have to do it myself.” That may sum up the next move from Minnesota’s business community after the November election.

The Minnesota Chamber of Commerce is already planning for the 2011 legislative session with suggestions for trimming government and it’s promising to get specific.

“Truthfully, you will see the Chamber work harder and bringing ideas on how to deal with the budget issue,” said David Olson, president of the Minnesota Chamber of Commerce (and co-chair of MN Forward, the group independently supporting Tom Emmer’s candidacy). “We will go up and say don’t raise taxes and here’s some ideas on where legislators can look for savings and public sector redesign.”

We’ll have to wait and see what the Chamber proposes. But if the Chamber wants to balance the budget with cuts alone, those cuts will have to be massive because lawmakers will be confronting a projected $6 billion budget deficit for the upcoming biennium.

Former Gov. Arne Carlson, who inherited a budget shortfall of about 14 percent (compared to this year’s more than 20 percent) and left the state with billions in the black, foresees a nightmare next session.

Muses Olson: “Does anyone want this job?”

Furthermore, any winner will pose a problem for the business bloc. Mark Dayton and Tom Horner are promising the tax increases that business claims are job killers. Tom Emmer has pledged only budget cuts to cover the gap but some question whether he will he be a problem-solver not an ideologue. “Depends,” says Olson. “A governor usually doesn’t solve the problem by himself. There’s the inner circle, commissioners, legislators.” 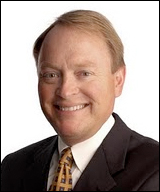 Prior to every legislative session, the Chamber identifies policy areas and outlines dozens of initiatives, but this would be the first time it delves into what would be line-item budget detail. Olson says in November the Chamber will take these budget proposals around the state in November, get input from members, then roll out a legislative plan in the following weeks.

Olson pointed out that all three candidates expressed interest in hearing the Chamber’s ideas. They better, according to Carlson. The budget is “a fiscal disgrace, and who is going to pick up the mess — the business community,” he said.

Carlson advises business to come up with another do-it-yourself plan. To avoid divisions in the business community, he suggests that groups like the Minnesota Business Partnership, the Chamber, the Minnesota Realtors, et al., be put under one umbrella — and not only to have a cohesive political front.

“Put together a list of people who can be serious contenders,” said Carlson, who supports Independence Party candidate Tom Horner this year. “Run a candidate that can win and we can coalesce behind.”

Whether business actually puts together its own slate for 2014 is still in a speculative stage, but it’s clear that given the enormous concerns about the outcome of November 2010, lawmakers should prepare for a united, aggressive business front in 2011.