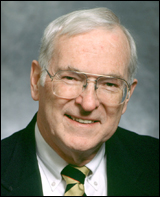 “I feel so lonesome.”

Although these three men and 10 other former GOP legislators are sincere in their support of Independence Party candidate Tom Horner, the endorsement carries a warning to the Minnesota Republican Party — watch your middle.

When asked whether the endorsement was intended as a statement to the party, Belanger replied, “Definitely!”

Belanger was one of the founders of the Bloomington GOP in the mid ’50s. “We held monthly meetings that were open,” he said. “We didn’t have litmus tests.” 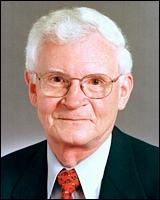 Like the war horses they are, they buck and rear at the suggestion they are no longer Republicans.

“We are people who feel the party has kind of left us,” Pillsbury said. “Tom Horner is a way to get back to the party we knew — a party that was in the majority at one time.”

Former state Sen. Ed Oliver of Deephaven, who worked on behalf of Marty Seifert for the Republican endorsement, said: “If Marty were the endorsed candidate I’d be working for him. I’m not un-Republican.”

Bishop, characteristically, is blunter: “I don’t want to be a Democrat. People said I have changed. I haven’t changed; they have changed.”

State budget gap
How have the Republicans changed? According to these former legislators, social conservatism was substituted for fiscal conservatism. As proof they cite the budget gap left by outgoing Gov. Tim Pawlenty and the spending increases in the federal government, much of which were amassed during the Bush administrations.

Social views can fit under the big tent, they say, but not at the expense of fiscal values — an area, these moderates say, the Republican Party has lost focus. Bishop again: “As fiscal conservatives they are frauds.” 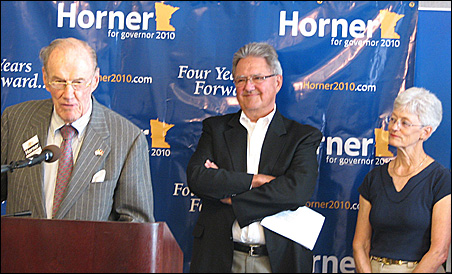 They also bemoan legislative gridlock. “I’ve been sick of what’s been happening in the Legislature for the last six years — the lack of bipartisan cooperation,” Belanger said.

Bishop agrees: “You govern from the middle, not from the extreme.”

Peggy Leppik, former state representative from Golden Valley, echoes their concerns. “No party, no individual holds all the right solutions, they come in from all over the place,” she said. “Honestly, I think they [political parties] are so guided by the far right far and far left that they don’t feel they need to look anywhere.”

All the former legislators I interviewed stressed that their endorsement of Horner has no ulterior motive. They all believe he’s the right man for the job. But what if Tom Emmer gets elected? What if he reaches out to these Republicans for advice on how to govern? Would they say yes?

Leppik answered that one with a chuckle, “I would give it serious thought because that is precisely what I want all three candidates to do.”