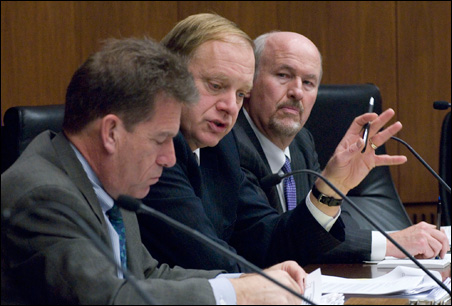 In this second excerpt from “This Is Not Florida: How Al Franken Won The Minnesota Senate Recount” by Jay Weiner, the venue moves to the State Canvassing Board, comprised of four judges and Secretary of State Mark Ritchie. The recount process was now in its fifth week. Unknown at the time, the Franken-Norm Coleman election would turn at this December 12 meeting when the Board, reversing an earlier decision, opted to allow a review of previously (and wrongly) rejected absentee ballot envelopes. Those rejected envelopes were now being referred to as “the fifth pile”; there were four statutory reasons to reject absentee ballot envelopes, and the “fifth pile” was for ballots turned down by election officials for no lawful reason.

This matter of wrongly rejected absentee ballots was not just a few here and a few there, Deputy Secretary of State Jim Gelbmann implied. He told of the case of Duluth, in which 127 ballots were rejected by local officials because of a lack of a date on ballots; witnesses and voters are not required to date the envelope. So, roughly forty percent of the absentee ballots in Duluth were improperly rejected, Gelbmann told the board. “I could see the faces of the members of the Canvassing Board,” Gelbmann remembered. “I knew from their faces they weren’t just going to say, ‘Let’s forget about it.'”

Add to Gelbmann’s news a completely new spin from Attorney General Lori Swanson’s office, which unveiled a second advisory opinion on the rejected ballots. This time, Swanson appeared at the Canvassing Board to support it. The attorney general’s office had changed its mind, and dramatically. The earlier view by Assistant Attorney General Kenneth Raschke — that wrongly rejected absentee ballots should be considered at an election contest and not at this Canvassing Board forum — was, essentially, refuted. A month earlier, Raschke wrote, “Only the ballots cast in the election and the summary statements certified by the election judges may be considered in the recount process.”

Now, there was a 180-degree reversal from Swanson’s top deputy, Solicitor General Alan I. Gilbert, who wrote to the board, “There is no doubt that voters who have complied with all legal requirements, but whose ballots were improperly rejected, should have their votes counted.”

Coleman’s side was convinced that powerful Democrats had gotten Swanson’s ear. “Political pressures reached their zenith,” Coleman lawyer Tony Trimble said later, “and they weren’t just Minnesota pressures,” but in this slice of the recount, the Minnesota Republicans were disappointed even more by Canvassing Board member and Minnesota Supreme Court Chief Justice Eric Magnuson, whom they saw as one of their own. Magnuson had been appointed by his former law partner, Gov. Tim Pawlenty. Coleman lawyers Fritz Knaak, Trimble, and others, including Franken’s lawyer Marc Elias, presumed Magnuson would err in Coleman’s favor. Any illusion that that would occur ended on December 12 at the board’s meeting in a hearing room in the basement of the State Capitol, down a flight of steps from Swanson’s corner office.

After Swanson outlined Gilbert’s revised opinion, a discussion ensued about just how far the board could take it. The four sitting judges were used to ordering people and corporations and local governments to do all kinds of things. But as Canvassing Board members, they weren’t judges, and this board had no authority to order anybody to do anything, but it could request or recommend. Board member and Ramsey County District Court Judge Edward Cleary was the most forceful advocate for including the wrongly rejected ballots.

“I don’t believe those to be rejected ballots,” he said of the now-familiar fifth pile. “I believe them to be uncounted ballots…The bottom line: I think we’re disenfranchising voters who followed the command of the law, who submitted the absentee ballots according to law, and it would be unjust and disrespectful to those voters to not count those votes.”

Magnuson indicated to Ritchie that he wanted to speak. “Please,” Ritchie said, extending his hand to offer the floor to the chief justice. Magnuson had something important to say. “Mister Secretary and other members of the Canvassing Board, I agree wholeheartedly with Judge Cleary,” he said. “The idea here is to count ballots that were properly cast…”

When she heard Magnuson agree with Cleary, Ramsey County District Court Chief Judge Kathleen Gearin leaned back in her chair, digesting the moment. Cleary said later he was surprised at Magnuson’s agreement with him. The two had been disagreeing on many issues in previous Board sessions.

“Eric and I butted heads in the first couple of meetings,” Cleary remembered later. “I’m not thrilled about butting heads with the chief justice. But it felt to me that Eric was making a concerted effort to walk a line, and when I saw that I began deferring to him…If he had shown strong partisan tendency, this could have been a mess.”

Ritchie was the chairman of the panel, but, as time wore on, it became clear that the others looked to Magnuson for signals. His wholehearted agreement with Cleary would ring long in the ears of Republicans statewide. A majority coalition was forming on the Canvassing Board, and it wasn’t to Coleman’s advantage. Magnuson had only been a judge for six months, but Gearin, who had been on the bench for twenty-one years, knew what happened to lawyers who became jurists in Minnesota.

Excerpted from “This Is Not Florida” with permission from the University of Minnesota Press.

Jay Weiner will be talking about “This Is Not Florida” and signing books: