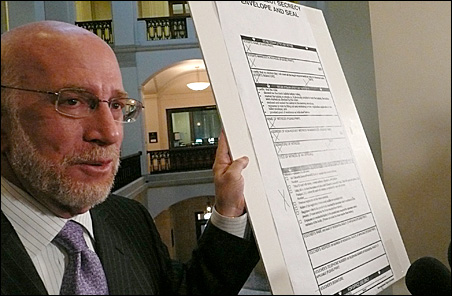 This is the last of three excerpt from “This Is Not Florida: How Al Franken Won The Minnesota Senate Recount” by Jay Weiner. This focuses on Sen. Norm Coleman’s lawyer and spokesman, nationally known Republican elections expert Ben Ginsberg, who also was a key player in the George Bush-Al Gore 2000 presidential recount in Florida. The date here is Feb. 18, 2009, and the election contest was heating up; the contest was the trial in which Coleman sought to overturn the ruling of the State Canvassing Board that Al Franken had garnered the most votes. The trial court’s three-judge panel had already made decisions indicating that Coleman’s case was on shaky ground. So, too, was Ginsberg.

Maybe Ben Ginsberg realized he and Norm Coleman had lost and so decided to yell at the referees. Maybe he figured it was the only way to keep the fundraising for the expensive recount effort going. After a February 13 ruling that limited the categories of ballots the three judges said they would examine, the Coleman lawyers asked the judges to reconsider their decision.

But beginning on February 18, after the judges refused to reconsider their ruling, Ginsberg freaked and starting blasting away at the panel. He issued statements, he talked in the hallway outside the courtroom, he poetically dubbed it the “Friday the thirteenth” ruling, as if more a horror movie than a judges’ opinion, and he launched the Coleman effort of questioning the legitimacy of the election and the competency of the judges.

He said, in a bold written statement,

… The net effect of the court’s February thirteenth ruling, and their decision to not reconsider this ruling, is a legal quagmire that makes ascertaining a final, legitimate result to this election even more difficult.

The next morning, the six lawyers — three from each side — made their daily chambers appearance before the three judges. They took their appointed seats on one side of the long, polished table. The judges had put on their robes in the room nearby and entered, with Coleman lawyers Jim Langdon, Tony Trimble, and Joe Friedberg rising alongside Franken lawyers David Lillehaug, Marc Elias, and Kevin Hamilton, as the judges approached their seats on the other side of the table.

“Well, gentlemen, welcome to the quagmire,” said Stearns County District Court Chief Judge Elizabeth Hayden, in her best, acerbic vice principal voice. If anyone felt the judges were living in a bubble, reading and writing briefs and not following Ginsberg’s and Elias’s hallway shenanigans for the media, they were wrong. Ginsberg’s comments, as Langdon put it in military terms, “had taken us to DEFCON 1, threat level red.” Mr. Ginsberg was in the doghouse.

Friedberg, the respected veteran Minneapolis trial attorney, had been uncomfortable with Ginsberg going after the judges. It wasn’t a Minnesota thing to do, and the statement about a quagmire and questioning a “legitimate result” came on a particularly odd day. While he had been in St. Paul for a month and in the courtroom almost daily, Ginsberg never was formally admitted to participate in the trial. So, at some point in mid-February, it was decided he should file what is known as a pro hac vice petition. Pro hac vice is Latin for “this occasion” or “this event,” and it’s a way for licensed attorneys from other jurisdictions to practice law in a state in which they have not passed the bar exam. Elias, from Washington, D.C., and Hamilton, from Seattle, for instance, had been admitted pro hac vice at the beginning of the case. It is considered a routine deal. Ginsberg happened to file his petition on February 18, the day he made the quagmire statement.

The judges never ruled on it. It just sat there like a dead fish on their piles of motions and briefs…

By March 13, the election contest trial testimony and arguments were over. By April 13, the judges ruled unanimously that Franken had won more legal votes than Coleman. By June 30, the Minnesota Supreme Court upheld the three-judge panel. On July 7, 2009, Al Franken was sworn in as Minnesota’s junior U.S. senator.

The Bush-Gore recount took thirty-six days to wrap up in Florida. The Coleman-Franken recount needed thirty-five weeks to be resolved in Minnesota. This was not Florida.

Excerpted from “This Is Not Florida” with permission from the University of Minnesota Press.

Jay Weiner will be talking about “This Is Not Florida” and signing books:

‘This Is Not Florida’: A quagmire — and the judges speak volumes with silence