Today, in 2010, a DFL gubernatorial candidate is proposing an increase in state taxes. Mark Dayton may be hoping for his own “Minnesota Miracle” when he faces his Republican and Independent Party challengers Tom Emmer and Tom Horner in next week’s off-year election.

But how did the governorship of Wendell Anderson, whose first term led to the so-called Minnesota Miracle, come about?

While his critics dubbed Anderson “Spendy Wendy,” the derisive moniker did little to impede his early ’70s political career. In 1970 the Minnesota DFL chose Anderson, then a St. Paul state senator, as its candidate for governor. The athletically handsome 37-year-old, a former U.S. Olympic hockey star, was an appealing figure to the DFL, which had come through a bruising internal battle two years earlier.

In 1968, the party had come close to breaking apart when insurgents, who supported Eugene McCarthy and his bid for the Democratic presidential nomination, fought with the party’s established leaders who were backing Lyndon Johnson’s vice president, Hubert Humphrey.

Then, in 1970, Humphrey was back in Minnesota after his earlier presidential loss to Richard Nixon. Now, seeking to fill the Senate seat vacated by McCarthy, the former vice president would share the DFL election ballot with Anderson. In November, Humphrey faced Republican Rep. Clark MacGregor, while Anderson squared off against Attorney General Doug Head.

Citizens League injects a new issue
During the months leading up to the Nov. 3 election, a new issue was injected into the gubernatorial campaign that would have important ramifications for the state’s future fiscal structure. In September, the Minneapolis-based Citizens League, a local “good government” think tank, issued a study entitled “New formulas for Revenue Sharing in Minnesota.” The 67-page report was filled with arcane minutia about the complex interactions of Minnesota’s state and local taxing systems. 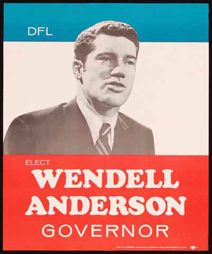 Midway through its report, the League floated a proposal to alter the balance between state and local financing for public education by shifting more of the cost of education away from the local property tax to a statewide funding source. Such a shift might not necessarily raise the overall state-local tax burden in Minnesota, the League maintained, but it would help eliminate the disparities in education funding between those local school districts that were property rich and others that were property poor.

The League shied away from the question of whether overall support for education should increase in Minnesota, leaving that issue to be resolved in the state’s political arena. But very soon, the government reform group found that its proposal had, in fact, become enmeshed in state politics.

Anderson calls for school funding shift
In an Oct. 1 debate between Anderson and Head, which was sponsored by the Citizens League, the DFL gubernatorial candidate called for a full shift in the cost of public education away from the local property tax to a statewide funding source. Anderson indicated that the statewide source would include a state property tax. But he also hinted that he would support an income tax increase for upper-bracket Minnesotans, noting that the current tax structure remained progressive only for incomes up to $20,000, where the tax rate topped out at 12 percent. Every one point percentage increase in taxes for incomes over $20,000 would yield an additional $4 million in state revenues, Anderson maintained.

In his analysis of Oct. 1 debate, Minneapolis Star reporter Ted Smebakken, who would later head the Citizens League, wrote that Anderson was “buying” the League’s proposal to equalize educational funding throughout the state.

Almost immediately, Head went on the attack, claiming that Anderson’s proposal would transform a locally controlled school system into one in which the state Legislature would become a “super school board.” Later Head would call his opponent’s plan “a radical proposal” to change the method for financing public education in Minnesota. Republican Attorney General Candidate Robert Forsythe was even more outspoken. Anderson had just hung “a massive bag of cement” around the neck of the Minnesota taxpayer, Forsythe declared.

Anderson fought off these attacks and went on to defeat Head handily in the Nov. 3 election, winning 54 percent of the vote.

The follow-through proposal
Two month later, Minnesota’s newly elected governor followed through on his proposal to overhaul the state’s public education financing system. While his state budget plan did not call for a full state takeover of education funding, it did propose an increase in the state’s share of school aid from 43 percent to 70 percent of the total by the end of the 1971-72 biennium.

Anderson maintained that this shift would reduce local property taxes in 96 percent of the state’s 434 school districts and help equalize per-pupil spending between the rich and poor districts. But this shift would come at a cost of over $750 million, which represented a 37 percent increase in the state budget. The newly elected governor proposed to fund this spending increase with a whole array of new taxes on incomes, inheritances, cigarettes and liquor. 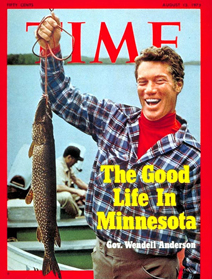 Eventually, Anderson was able to persuade a reluctant Legislature to approve much of his school financing plan. As finally adopted, the plan raised the state share of education funding to 65 percent of the total cost and established a new formula for allocating supplemental state aid based on the number of low-income students in the individual school districts.

Despite claims by his opponents that Anderson’s tax increase would provoke a backlash from Minnesota voters, the DFL governor would go on to swamp his next Republican opponent by winning 63 percent of the vote when he ran for re-election in 1974. The previous year, his profile had been enhanced when he appeared on the cover of Time magazine wearing a flannel shirt and holding up a large northern pike.

Later Anderson would face a backlash from the voters when he arranged to have himself appointed to the U.S. Senate vacated by Walter Mondale. But during those earlier years, Anderson was known as the governor who helped bring about the “Minnesota Miracle” when this state found a new way to pay for the cost of public education.

‘Spendy Wendy’ and the 1970 gubernatorial election