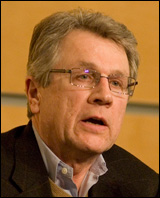 To close at least part of the state’s $6 billion budget deficit in the upcoming biennium, what sales taxes would Tom Horner increase and by how much?

The answers could well come from Bill Belanger, a Republican who has endorsed Independence Party candidate Horner and the former state senator from Bloomington who spent years on legislative tax committees.

“There are 83 exemptions in the state sales tax,” he said.  “That’s ridiculous.  Essentially, the only big ticket items we tax are cars and appliances.”

Belanger was part of a blue ribbon panel called The 21st Century Tax Reform Commission, appointed by Gov. Tim Pawlenty, which, after a year of work, presented the blue print for a tax overhaul that Pawlenty rejected. The commission recommended broadening the sales tax to include more types of personal consumption, but said exactly what that should include should be determined by the Legislature.

Belanger made it clear that most of those exemptions should be on the table, with the exception of food and prescription drugs. And in a spry bit of table-turning, Belanger said it’s the Republican Party establishment that’s refusing to take a fresh perspective on the budget.

“I don’t have a problem taking a new look at the way government operates, but that means changing things,” he said. “They want to keep on with this antiquated tax system that doesn’t work any more. They can change it and make it better, and even make it revenue neutral.”

Minnesota needs to come into the 21st century with its tax code and initiate the changes that other states have made years ago, according to Belanger, and that includes changes in the business tax also advocated by the tax reform commission.

For more details of the commission’s recommendations, which may well be the details of a Horner tax plan, go here.

What sales tax would Horner back? GOP supporter offers some hints