The first potential big-time legal skirmish of the 2010 Minnesota gubernatorial recount didn’t develop into much of anything this morning at the Hennepin County canvassing board’s post-election meeting.

All that occurred was a post-meeting, hallway, chatting-with-reporters staking out of positions that we will be hearing from now until Nov. 29 when the recount begins … if it begins.

The 27-minute canvassing board meeting was remarkably routine. During it, Hennepin County Elections Manager Rachel Smith reported that in the county’s canvass of votes, Republican Tom Emmer picked up six on DFL candidate Mark Dayton. That’s six out of 463,000 votes, or about 20 percent of the state’s total votes.

Smith also explained again what happened on Election Night when votes were double-reported for a while on the county and secretary of state’s website.

If the Emmer forces wanted to make a stink about it, they didn’t today.

But in the political message realm, one of Mark Dayton’s lawyers, David Lillehaug, and one of Tom Emmer’s lawyers, Tony Trimble, told reporters where each camp stands.

Lillehaug: “What we saw today in Minnesota’s largest county is what is happening all over the state. Election officials have done their work well … and are finding very few, if any, errors in their tabulations. As a result, it is again clear on the Monday after the election that Mark Dayton again received the most votes in the campaign for governor … We expect the result strongly in favor of Mark Dayton to hold up very well.”

Asked if he were confident about the reality of the votes now and Dayton’s lead, Trimble said: “We’re not confident yet. That’s what the recount is for … As we turn over the various stones and rocks, we’ll see how many votes are going to be switched and come our way … We’re tracking our deer quite nicely right now.”

He was asked about the Hennepin County error that Smith explained and reserved comment.

But Trimble noted that Dayton’s lead has shrunk a few thousand votes since Election Night as tallies around the state begin to shake out and get reported to the Secretary of State’s office. The lead at 2 p.m. today stood at 8,751.

The key today was that Lillehaug and Trimble, veterans of the Al Franken-Norm Coleman 2008 U.S. Senate recount, were chatting calmly with journalists and not raising substantive legal issues with the county’s canvassing board.

Two years ago at this analogous Hennepin County canvassing board meeting, Lillehaug, then representing Franken, took his first stab at including wrongly rejected absentee ballots into the recount. That meeting was a critical introduction for Franken, who was behind, to lay the foundation for a statewide effort to include improperly rejected absentee votes. Eventually, Franken’s forces won on that significant issue.

This time, Trimble and the Emmer effort had nothing similar up its sleeve.

“No, none whatsoever,” he said.

He also mentioned a dustup at the apparently always troublesome University Lutheran Church of Hope voting precinct. In 2008, ballots were lost there.

This time ’round, there are allegations that new voters were “vouched” for improperly.

This is an episode that will be worth remembering, if and when the Emmer lawyers contest the recount.

For entertainment, the meeting was highlighted by various members of the canvassing board pulling 13 tiny items out of a Lotto-like drum. These were each numbered and corresponded to precincts in the county; next week, those 13 precincts will get a sample recount to judge the accuracy of voting machines and counting, etc. It’s called a “post-election review” and is designed to show the accuracy of the state’s voting system. That system will continue to be put on trial by Emmer and the GOP until this election is settled. 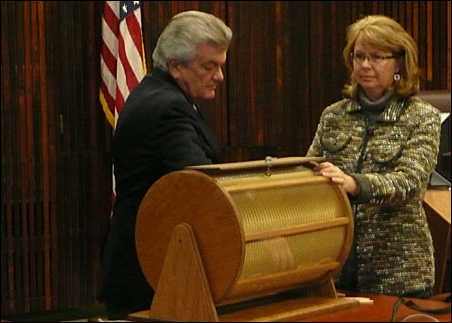 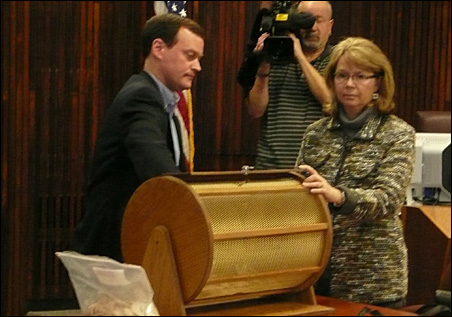 MinnPost photo by Jay Weiner
County commissioners Randy Johnson, above, and Jeff Johnson draw numbers from a lotto-like drum to select precincts for a random test of voting machines.

Meanwhile, in an announcement that reveals the GOP’s commitment to leading an organized recount, the Republican Party of Minnesota announced that Ben Golnik will manage recount operations for Emmer for Governor and the party. Golnik oversaw the GOP Senate elections and was former executive director of the Republican Party.

Also, Matt Kirkpatrick will serve as director of lawyer recruitment, and Janet Beihoffer has been named director of volunteer recruitment for the Emmer for Governor, Republican Party of Minnesota gubernatorial recount operation.