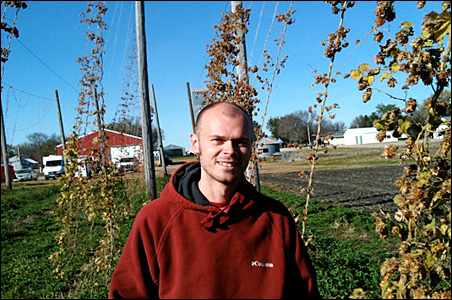 MinnPost photo by Mark Neuzil
The hop vines are done for the season at the Brau Brothers brewery in Lucan, Minn. On a recent weekday, Dustin Brau, CEO, supervised the removal of this year’s vines in the field in front of the red brewery building.

LUCAN, MINN. — For one family in one small town in southwestern Minnesota, the answer to the economic-development question comes in four parts: water, yeast, hops and barley.

Since 1998, Dustin Brau — yes, the German word for beer is really his last name — and his extended family have been successfully making and selling craft beer from the small town of Lucan, population 220.

Brau Brothers beers are distributed in five states, mostly in Minnesota. Dustin and his brothers Trevor and Brady, along with their father, Dale, take advantage of lower costs in their hometown and a degree of fix-it-or-make-it-yourself ability that’s well known to any farmer.

“Lucan helps us differentiate ourselves,” Dustin told me during my recent visit to the 5,000-square-foot brewery. “It’s genuine and legitimate. And we put ‘Pop. 220’ on everything we can.”

Began as a brewpub
The company started as a brewpub and five years ago became a microbrewery. It also leases a 3,000-square-foot warehouse in Lucan, and it has five full-time and 10 part-time employees. It has produced an average 1,500 barrels of beer per year and is on track to double that output by the end of next year, Brau said. About 40 percent stays in the state, with the rest shipped to the Dakotas, Iowa and Wisconsin.

The brewery, in a single-story barn-red building on the edge of town, evokes memories of the end of the 19th century, when more than 100 brewers dotted the state in villages small and large. At least three were here in Redwood County.

Prohibition shuttered fermenters from coast to coast, and after the ban was lifted, giant Twin Cities brewers such as Grain Belt, Hamm’s and Schmidt captured the market in Minnesota, along with a few local operations at Cold Spring and Schell’s in New Ulm.

The Brau Brothers are part of version 3.0 of the Minnesota craft brewing movement, along with fellow mid-2000s start-ups Surly and Flat Earth. Their prototypes began in the mid-1980s with Summit and James Page, followed by batch 2.0 in the 1990s, including the now-defunct Ambleside and Glacial Lakes.

All were looking for a niche in the specialty category, which makes up about 6 percent of the beer consumed in the country but is the only growing segment.

“Our biggest challenge is finding our place in the market, but we have a thousand little challenges every day,” Dustin said, as his father sat nearby fixing a keg; in the brew house, a nephew and another employee jackhammered two new drains.

Watching costs, keeping flexible
Cost control is a constant concern, and a pencil and eraser might be their most important tools. All Brau equipment was purchased used — eBay here, bankruptcy there — and modified to fit. For example, the pasteurizer came from a deli in Kansas City, the bottler from a New York brewery and the labeler from Germany. The six fermenting tanks used to live in Baltimore.

An eraser is used for adapting the business plan. “You can’t be afraid to take a chance in a small town and do something different,” Dustin said. “But outline everything in pencil because you don’t know what forces will affect you. It’s a combination of being flexible and sticking your neck out.”

My colleague Dave Brennan at the University of St. Thomas Opus College of Business, who keeps an eye on small businesses, said finding potential markets is critical for a place like Brau Brothers. “On the other hand, small, local breweries are a novelty effect and prospective customers are frequently searching for new beers,” he said.

Hundred Yard Dash dashes off the shelves
At the Ale Jail liquor store in St. Paul, Adam Schulte keeps an eye on craft beers. A couple of weeks ago, he received a shipment of five cases of Brau Brothers Hundred Yard Dash, a fresh hop ale so named because of the distance from the Lucan hop field to the brew house. “We got five cases in on Friday afternoon and by Saturday they were sold,” he said.

“Places like the Ale Jail are critical to our business,” Brau said. Among other things, they help Brau maintain a toehold in the Twin Cities market. 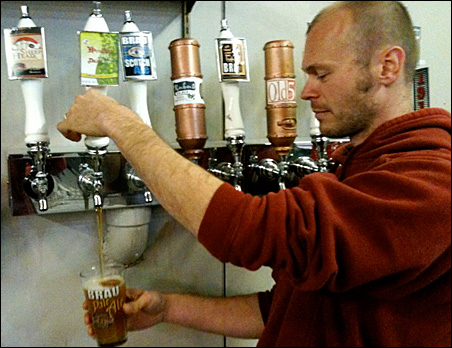 MinnPost photo by Mark Neuzil
The fresh hopped ale Hundred-Yard-Dash, poured by Dustin Brau, is so named for the distance of the sprint from the hop field to the brewery.

Hundred Yard Dash is Minnesota’s nearest thing to an estate beer, with many of the ingredients grown on the six-acre Lucan site. But craft-beer drinkers are a finicky bunch; brand allegiance enjoyed by larger brewers is less fierce as they search for the Next Hoppy Thing.

The small-town origins might overcome that, Brennan said. “One thing about small companies from small places is the loyalty factor. This is something they can trade on,” he said.

(The disadvantage of a small town, along with the hard work of brand recognition, is, well, its size. “It’s hard to convince the wife of a brewer to move here,” Dustin said. And, as with any small town, “if you make a mistake everyone knows about it.”)

From light to hoppier
The beer-rating websites tend to like the stronger (read: high alcohol) products from the Braus and are less disposed to the lighter-flavored and lower-alcohol brews, which can be more popular with the casual drinker.

“We made [lighter] beer when we started for the southwest Minnesota market,” Dustin said. “If they had tried our [hoppier] Sheep Head beer first thing, that would have been the end of it. But we got ’em on our side and we then pushed the limits a bit.”

The economic-development question has multiple answers, and not just casinos, ethanol plants and nursing homes. In Lucan, it’s beer.

Mark Neuzil writes about the environment, agriculture and Greater Minnesota for MinnPost, and teaches journalism at the University of St. Thomas in St. Paul.