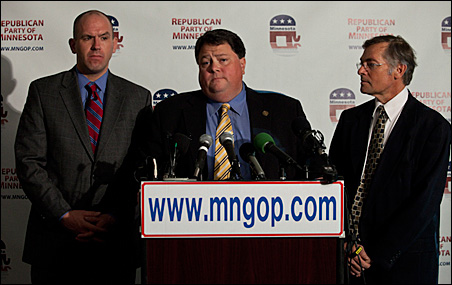 But this morning, the boisterous Minnesota Republican Party chair, with a twinkle in his eye and fire in his belly, did himself one better. He sliced, diced and filleted Tuesday’s gubernatorial election, called Secretary of State Mark Ritchie names, said “we’re not going to get rolled again” in a recount process — as if the GOP was rolled in the 2008 Al Franken-Norm Coleman saga — and otherwise blew his top at an opening-salvo news conference.

“The race for governor is not over,” Sutton declared, 14 hours after the polls closed but weeks before we will know who the next chief executive of the state will be.

This was Day One of The Next Big Recount, and the Republicans aren’t going to go gently after Tuesday’s long election night.

For one, they’re going national with their legal team. In 2008, Sen. Coleman oversaw his recount team and went local. This time, the state GOP is taking over the legal reins for candidate Tom Emmer, and they’ve hired Michael E. Toner. He’s the former chairman of the Federal Election Commission under George W. Bush. He is highly respected by election lawyers nationwide. But Democratic sources told me they were unaware whether he has any extensive recount experience.

Minnesota Republican Party lawyer Tony Trimble, who was one of Coleman’s chief lawyers, is also on the team.

For another, Sutton came out swinging, noting early and often at Republican Party headquarters today that “something doesn’t smell right” about DFLer Mark Dayton’s 9,000-vote lead while the GOP swept the Minnesota House and Senate and the traditional DFL stronghold of the 8th Congressional District fell to upstart Chip Cravaack.

Sutton made a big deal out of a reporting glitch by Hennepin County.

For a while Tuesday night, the county’s website had counted votes twice for candidates. Quickly, the reporting error was fixed. Emmer picked up 60,000 votes in the process. Hennepin County elections director Rachel Smith is among the most knowledgeable and respected election officials in the state.

Still, Sutton couldn’t contain himself. And, of course, Secretary of State Mark Ritchie, the left-of-center elections chief who was re-elected Tuesday, was Sutton’s favorite punching bag.

Sutton called the election process “quite frankly, a disgrace … I’m to the point now, I don’t think it’s any coincidence that Mark Ritchie is administering this process and here we stand today …We are going to be very, very aggressive through this recount process … We owe it to this state that this is done right and not a process that is dominated by an ACORN activist who happens to be secretary of state … We’re going to put his feet to the fire. We’re not going to get rolled this time.”

Such is the climate of this recount in its opening hours.

To be sure, Sutton was invoking one of the first rules of a trailing candidate in a recount, especially if he’s as far behind as Emmer: question the legitimacy of the election.

He also was rewriting history a bit: Ritchie had little to do with the key decisions that allowed Franken to win the recount and 2008 election. It was judges, most of whom were appointed by Republicans, who did that. But, whatever …

When you’ve got the chance to control the entire state political apparatus and the redistricting of congressional districts, you say what you can and do what’s possible. Remember when the other side was so eager to get its 60th senator to Washington, D.C.? It was just two long years ago.

Ironically, this time, the current office holder stays in place. Minnesota had a vacant Senate seat for six months, but the Minnesota Constitution says that Gov. Tim Pawlenty would stay in office if this recount extends into 2011

That might be a pleasant event for Republicans as they now happen to control the state House and Senate, too. If Dayton can’t get there soon enough, Pawlenty might oversee the start of the 2011 legislative session. Ponder that. Mr. Sutton is, we’d guess.

For his part, Ritchie said the election went well. Turnout was super-high. A few problems here or there, but nothing major. But the newly re-elected secretary of state seemed to slip in his own sleeplessness by saying this morning, “We in our office are planning to have fun with this recount this time around.”

Fun wasn’t on Sutton’s or the GOP’s agenda today. Won’t be tomorrow.

“You know what, it’s our turn. It’s our turn to overturn every stone looking at the votes,” said Sutton of the Franken legal team’s successful harvesting of wrongly rejected absentee ballots in 2008.

Despite Sutton’s dramaturgy, Trimble, the lawyer, provided the most poetic quip of the day. Referring to the Democrats’ savvy use of voter data during the 2008 Senate recount, Trimble said. “This situation is reversed. They’re trying to stop the train. We’re the train.”

Recount: The Sequel is coming full steam ahead, right at you.

* The Canvassing Board that will oversee the final tallies and, perhaps, make decisions on challenged ballots was named. All four judges were appointed by Republicans. But there are two especially interesting figures: One is Supreme Court Justice Paul Anderson, an election law expert, who was a vocal judge from the bench during Franken-Coleman arguments; the other is Hennepin County District Court Judge Denise Reilly, who was one of the three judges who oversaw the Coleman-Franken election contest. Supreme Court Justice David Stras and Ramsey County Judge Gregg E. Johnson are the other board members, along with Ritchie.

* The timing: Beginning Friday, county canvassing boards will begin meeting to certify results in their precincts. Because of new state laws, the Canvassing Board won’t meet until Nov. 23. If the margin remains less than one-half of 1 percent, a hand recount statewide will begin.

* Ken Martin, of the progressive WIN Minnesota PAC, which helps fund the Alliance for a Better Minnesota, attempted to monitor the Sutton news conference. He was politely escorted out of Republican headquarters. Martin is going to work on the Dayton recount effort.

Meanwhile, although Dayton said today he had no legal team in place, it seems as if Minneapolis lawyer Charlie Nauen, who was instrumental in Al Franken’s absentee ballot hunt in 2008, will head up the Dayton legal recount effort. Also, former Minnesota U.S. Attorney David Lillehaug is expected to be on Dayton’s legal team. He was Franken’s lead locally based attorney during the 2008 event.

Dayton is scheduled to meet the media at 2 p.m. today.