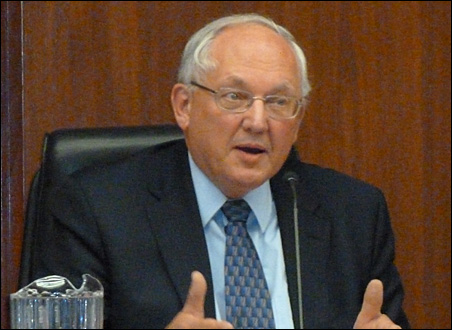 When Minnesota Supreme Court Justice Paul Anderson speaks to students, civic groups or lawyer confabs, he freely shares his opinions, some tall tales and lots of Minnesota legal history. The jurist is a chatty sort.

Despite all his talking, he always stops short of revealing something sacred: what it’s like when he and his six Supreme Court colleagues go behind closed doors and make decisions.

“I’ll never let you into the conference room,” he says. “Never.”

But today, during the fully public sunshine of the State Canvassing Board, an observer got a feel for what it must have been like when Anderson and former Chief Justice Eric Magnuson mixed it up in the High Court’s third-floor conference room over complex legal matters.

Magnuson, who left the bench last summer, is now Rep. Tom Emmer’s lead recount lawyer. Anderson, who wasn’t bashful during the Al Franken-Norm Coleman 2008 U.S. Senate recount, is now a member of the Canvassing Board, the administrative panel that met for four hours Tuesday to nail down details of the governor’s recount, set to start Monday.

And details they were, mostly little ones, about so-called “frivolous” challenges to ballots, and about who would determine what’s frivolous or not, and about how challenges were going to be reported to the public and the media. Tiny tweaks, yes. Lots of lawyer speak.

But tweaks nonetheless to rules. And rules get jabbed and bent by lawyers and political parties. It’s something that really gets under Secretary of State Mark Ritchie’s skin, as do unnecessary ballot challenges in recounts. In 2008, there were about 6,600 challenges, and only 1,000 were considered meritorious. Ritchie is determined to halt such frivolity and delay. He was trying to move the meeting along. But that wasn’t in the cards. 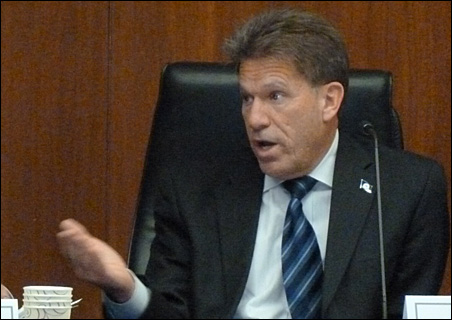 MinnPost photo by Jay Weiner
Secretary of State Mark Ritchie made it clear today that he does not want delays over frivolous matters.

Magnuson, for his part, was politely troublesome for the board and the Mark Dayton side, poking holes in various plans Ritchie and his staff — in coordination with the campaigns and state law and regulations — had established.

So, the board and Magnuson went ’round and ’round on this issue of ballot challenges and whether the election judges at tables in the 87 counties beginning Monday would be the final authorities on certain challenges, or the Canvassing Board. The board is made up of Anderson, Ritchie, Associate Supreme Court Justice David Stras, Ramsey County District Court Judge Gregg Johnson and Hennepin County District Court Judge Denise Reilly.

Once again, as at a Supreme Court hearing Monday, a disconnect between the recount statute and recount administrative rules was clear. Magnuson has been establishing a record on this cleavage.

For his part, Justice Anderson, appointed to the bench by Republican Arne Carlson 18 years ago, dominated the meeting, but mostly because, it seemed, he couldn’t take his Supreme Court hat off and, it seemed, because he feared neither could Magnuson.

That is, it sure looked as if Magnuson, on Emmer’s behalf, was seeking some legal sweet spots in which to create technical problems with the upcoming recount.

For instance, Magnuson attempted to revisit the “reconciliation” issue that the Supreme Court — without Anderson — denied Emmer Monday.

The Canvassing Board members said they didn’t want to wade into that matter after the court denied Emmer’s petition, and while everyone awaits the court’s full opinion. 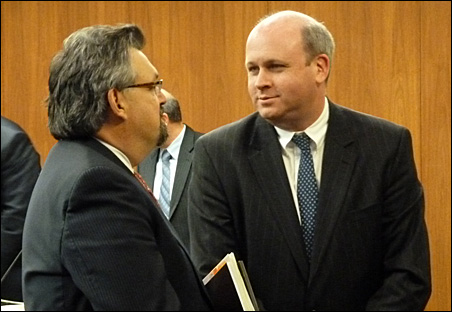 Magnuson, though, was also adamant about making sure all challenges — even these so-called “frivolous” ones — get their day before the Canvassing Board. In theory, such an effort runs counter to current election rules.

Anderson wasn’t easily agreeing with his former co-worker. It was fascinating to watch. Neither man was on the bench. Neither one in a robe. Neither one in that hallowed court conference room. But you could imagine what it must have been like when they were.

Anderson spoke of being able to feel the “wheels turning” of all the lawyers in the room — including Dayton’s — but he had to be referring to Magnuson, who knows what it takes to navigate a complex case to the high court.

Both seemed particularly mindful of a circuitous — but still to be revealed — end game for Emmer. For this is a recount that seems inevitably heading toward a substantial Mark Dayton victory by nearly 9,000 votes.

What can Emmer do — what can Magnuson do — but throw sand on the process when the numbers aren’t there?

During the deliberations, Anderson wanted to cover the board’s legal behind and head off a protracted election contest after the recount, like the one we saw in the Franken-Coleman scuffle.

“If we do something today that sets up what is going to be an almost automatic court challenge … I’m not willing to do that,” he told his board colleagues and state lawyers. He urged all sorts of caution to be sure that Emmer can’t point to a board miscue.

Meanwhile, Magnuson said his goal was to settle matters now, “to be prudent at the front end,” so as to avoid litigation at the back end. It’s a specter that the Emmer side continues to raise.

It took nearly three hours of back-and-forth between the board members, state Elections Director Gary Poser, Secretary of State lawyer Bert Black, Deputy Attorney General and Solicitor General Alan Gilbert and Ritchie to edit some recount rules. But amidst that, Anderson confronted Magnuson with the fundamental question of the day and— indeed — of the recount.

Leaning back in his high-backed leather chair about 30 feet away from Magnuson, Anderson bluntly asked the former chief justice: “If there are 6,000 ballot challenges and the spread is 8,770, are you seriously going to go forward and make us review through all of those?”

Anderson helped him a bit: “That’s a rhetorical question, I don’t expect an answer.”

But the implication was clear: When this recount ends on Dec. 7, and if it goes smoothly, does Magnuson really plan to challenge an election that can’t be won?

Later, after the hearing, Magnuson was asked again the Anderson question by a reporter. This time, it wasn’t rhetorical.

“That really is going to be Rep Emmer’s call,” he said of the numbers game. “I’m his laywer. He has a good legal team, working hard to make sure the law is followed. When it comes to calling the shots, he’s the guy.”

Earlier, Anderson had said to all in attendance, “I want to get this right.”

Presumably, that’s everyone’s goal next week, when the recount begins Monday, 9 a.m. sharp. Both campaigns said there were no plans for shenanigans. Here’s what we know after Tuesday. If it looks as if games are being played, a current Supreme Court justice won’t have any problems getting into the face of a former Supreme Court chief justice. Paul Anderson will have his say.

To watch the entire State Canvassing Board meeting, go here.

Governor’s recount: Two colleagues who know the system square off before Canvassing Board