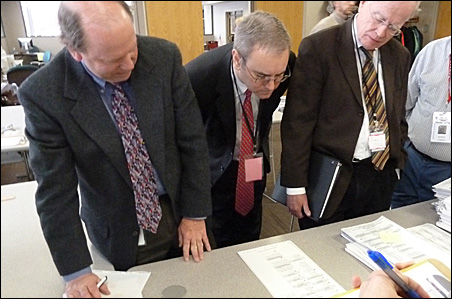 Joe Mansky, the dean of election officials in Minnesota, and Michael Toner, the former chairman of the Federal Election Commission, were in a heated conversation.

The site was the Ramsey County Government Center, down the hallway from Mansky’s usual office, and a venue for Day Two of the Tom Emmer-Mark Dayton recount.

Toner, the respected lawyer from the white shoe Bryan Cave law firm in Washington, D.C., was in Mansky’s bailiwick representing Emmer, the Republican candidate who trails by a ton of votes.

“It’s not a wedge issue,” said Toner, mixing his politics and pigskin metaphors.

This led us to one conclusion on Day Two of the governor’s recount: the thing is already losing a little steam. Or, as Dayton recount director Ken Martin put it hours later during a yawn-inducing news conference, “Unfortunately, we don’t have anything exciting to add today…Things are slowing down quite a bit.”

Just ask Mansky and Toner. In Ramsey County, with about 10 percent of the state’s votes on Nov. 2,  Mansky is helping to reduce the fires, the smoke and the steam. Toner is being a perfect gentleman.

This is not 2008 Recount Redux. That was the Great Minnesota Recount. This is the Legally-Mandated-Let’s-Make-Sure-Everything’s-On-The-Up-and-Up-And-Get-It-Over-Soon Recount.

As we know, Republican Emmer is behind by more than 8,700 votes. Dayton recount data — which will prove to be close to exact — at 1:30 p.m. today had Emmer behind now by 8,975 with 59 percent of votes recounted.

So, the longer this thing plays out the behinder Mr. Emmer gets and in a few counties, notably, Hennepin, the Emmer ballot challenges are increasing the way some soldiers never give up the fight even after the war is over.

Monday, Mansky, who used to work in the Secretary of State’s office, and who knows election law about as well as he and Toner apparently do college football, made an executive decision. It was in response to a ruling from the State Canvassing Board last week. The board directed local elections officials to clearly mark “frivolous” challenges, because it said it might want to take a look at those silly ballot objections at their next meetings.

But Mansky, in the election biz for 25 years, decided to use another method. He decided to head off frivolous challenges at the pass. Call it Mansky Mediation. Or Smooth Joe’s Ballot Reduction Machine.

In the end Monday, there were only 55 valid — that is, non-frivolous — challenges recorded in Ramsey County. And today in a late morning interview, Mansky said he didn’t expect too many more. We’re talking about a county with 192,000 voters this year.

Here’s what Mansky was doing. When one of counting tables had completed its work — with judges sorting, with campaign volunteers nodding or challenging, with votes counted — Mansky and Toner were summoned to the table.

“Michael, they want us over there,” Mansky said to Toner, who was otherwise monitoring the recount via his Blackberry.

Mansky leaned over the table, examined the piles of challenged ballots, almost all questioned by Emmer representatives. About half were suspect challenges; the oval was filled a bit too much or a bit too little, but voter intent was clear.

Mansky  then showed the ballot to Toner, who  examined it as if it were a priceless diamond or a fly doing the backstroke in his cup of soup.

On about half of them, Toner reasonably acknowledged that the challenge by a well-meaning but overzealous Emmer volunteer was practically silly and legally frivolous. On others, he told Mansky that the Emmer side wanted to maintain the challenge; and some were clear, like the one with two gubernatorial candidates voted for, not one.

Other Emmer challenges included objections to votes with check marks or “X’s” rather than filled-in ovals. The Secretary of State’s office had sent out a memo saying those marks in an oval were permissible, but there were some Emmer challenges on such ballots. Mansky didn’t stop them.

“Thanks, Joe,” Toner would say after each event. Mansky and Toner were becoming fast and cordial colleagues. Maybe Day Three of this recount should be held at a sports bar.

The cards that Rep. Emmer holds were apparent before the recount started, but now they’re coming into closer focus every time Toner examines a stray mark here or a less-than-filled oval there; the votes aren’t there for Emmer.

Nor, it seems, are the soldiers in the field. Volunteers have been fewer for the Emmer side in Ramsey and Hennepin than for Dayton. Some Greater Minnesota counties — albeit Republican leaning — had no Emmer observers we’re told.

Meanwhile, Dayton’s director Martin said today that the DFLers recount effort has already raised more than $1 million for a project that is bound to cost “several million.” No word yet on how the Emmer recount is being funded

Just as significantly, another issue seems to be melting away.

Last week’s kerfuffle de jour was “reconciliation,” that is, whether there were more votes than voters in certain precincts. Amid that issue was whether election officials in many counties were counting the number of voters correctly; did they count signatures on voter rolls or did they count the voter receipts obtained when ballots were handed out at polling places? The latter, said many election experts, is more accurate.

Mansky said today that of the more 192,000 votes in his county, there remains one — count ‘em one — vote more than there were voters. All other votes have matched up.

So, in the state’s second busiest voting county, a single vote is in some doubt out of 192,000 with Emmer’s deficit growing each day. In many other counties, there have been no reconciliation disparities.

Perhaps this why Mansky, a graduate of Wisconsin-Green Bay — which doesn’t even field a football team —  and Toner — a University of Virginia grad whose team finished with a 4-8 record — saw their conversations turn to whether Michigan State or Wisconsin should be ranked higher in the BCS standings, why conferences and the NCAA didn’t tackle this head-on and the possible excitement that a 16-team big-time football playoff might generate. As professionally as they were resolving ballot challenges, maybe they could also solve this problematic national sports nightmare.

Unlike the college football bowl quandary, Day Two of the 2010 recount didn’t hold much controversy or any amount of uncertainty.