ST. CLOUD – The incumbent decided not to run for another term. A Tea Party-linked Republican enters the race. A Democrat with a long political track record flouts party leaders and defeats the DFL-endorsed candidate in the August primary.

Heading into Election Day, as the campaign turns negative, the race is too close to call.

Here in Minnesota House District 15B, where parts of Benton, Sherburne and Stearns counties share a state representative, the recount between Republican King Banaian and DFLer Carol Lewis seems like a scaled-down version of the larger gubernatorial race we just saw and recount we face.

But, compared with the relatively wide Mark Dayton-Tom Emmer gap, this legislative seat margin is paper-thin. 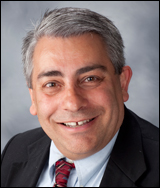 Banaian, a St. Cloud State economics professor and longtime conservative radio personality, is ahead of Lewis, a former St. Cloud school board member, by a grand total of 10 votes out of 10,971 cast.

Slim, yes, but, relatively speaking, not absurdly so. To extrapolate out, this 10-vote margin would be the equivalent of Dayton leading Emmer by 1,920 out of 2.1 million votes; significantly less than his 8,755 cushion but, still, a solid margin. Remember, Norm Coleman led by only 215 votes at the start of the 2008 recount, out of 2.9 million cast.

Still, no matter how you slice it, in these windy parts of central Minnesota, 10 votes out of 22 precincts is the width of a frozen nose hair and offers the chance for the GOP to gain a district that’s been in DFL hands since 1993.

It’s one of three legislative recounts set to begin next Tuesday; the others are in 25B (Rice and Scott counties), a 31-vote margin, and 27A (including Albert Lea), a 43-vote difference.

How’d they get here?
How it got this close is a tale of smart and focused campaigning by Banaian, a split within local DFL circles, awfully timed and head-scratching intrusions by the DFL House Caucus and, of course, the general Republican tidal wave of 2010.

There’s another curious factor: the St. Cloud area, like much of Minnesota, exhibited electoral schizophrenia: Banaian won only six of the 22 precincts, but in four of those, liberal DFLer Tarryl Clark outdid Republican incumbent Michele Bachmann. So, some of the same people voted for self-described “pro-life libertarian” Banaian and “Taxin’ Tarryl Clark,” as the GOP pegged the liberal state senator. 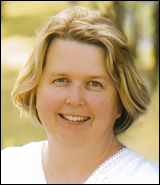 Said Lewis: “We saw one house with Emmer and Clark signs on the lawn.” Strange.

And then there was Haven Township, a rural/semi-suburban district southeast of St. Cloud. The final result turned there. Banaian, a first-time candidate for any office, won nearly 64 percent of the 1,048 votes cast there, beating Lewis by a total of 392 votes, wider margins than Emmer or Bachmann won that precinct.

Lewis understood the importance of Haven Township. She knew it was historically Republican, and strongly anti-abortion. She is pro-choice. She sent a targeted mailer to voters there; as a community activist in St. Cloud, she had worked with some Haven Township leaders in the past. She made phone calls.

But on the issue of the state’s Green Acres Program – a complex property tax program for farmers — she seems to have been outdone by Banaian who aggressively focused on it.

Primary
On May 16, the final day of the 2010 legislative session, DFL Rep. Larry Haws — a popular coach, teacher and political leader in St. Cloud for decades and a candidate who never lost a precinct in 15B in three elections — announced he was retiring for family reasons.

Within 36 hours, Lewis, who had run for the seat 20 years earlier and lost, filed to run. A day later, 30-year-old Zachary Dorholt, a former Haws campaign committee chairman, also filed with the Secretary of State’s Office.

Haws’ sudden departure, however, meant that the 15B endorsing convention wouldn’t be held until after June 3, the date on which candidates could withdraw. But there was a sense – still fuzzy – that Lewis was going to abide by the party endorsement.

Haws personally endorsed Dorholt, a mental health counselor by profession. And the newcomer won the party’s backing by gaining 81 percent of the delegates.

Lewis took on Dorholt in the primary — sort of like Dayton took on Margaret Anderson Kelliher in the DFL gubernatorial primary – and, clearly, the party activists split. Dorholt had to make himself known in the seven weeks between the district convention and the primary. Lewis, well known in St. Cloud, won 55 percent to45 percent.

Lewis acknowledged that the intraparty division “hurt” her.

Meanwhile, Banaian, an economist with a statistician’s bent, was unopposed, using the summer to build toward his general election campaign and wondering.

“Whatever the political battle was, it was invisible even to me until about three weeks before the primary,” said the former St. Cloud State economics department chairman. “There were weeks of ‘What are they doing? I know they’re both running, but I’m not seeing anything.’ ”

He was studying data from the past 10 elections in the 15B precincts. And he and other Republican candidates in the region zeroed in on Haven Township.

“Learning from economics, your productivity is highest where your field is fertile,” Banaian said. “And that field was fertile.”

Literally. Banaian and other GOP candidates in the area focused on the farmers in and around Haven Township who had seen their property taxes soar by as much as 40 percent because of tweaks in the Green Acres Program, which had allowed certain ag property to be taxed at less than market value.

The law was supposed to take suburban and ex-urban development into account. While Lewis and Dorholt were slugging it out, Banaian was meeting with 160 people “incensed” by the changes. He was becoming their guy.

And, as the campaign wore on, he didn’t see Lewis pick up on that anger in that precinct, a precinct she knew she needed to keep under control to win.

You’ve got mail
Considering their political differences and the tensions in American and state politics, it was a remarkably cordial campaign. Lewis’ husband, Richard, a St. Cloud State history professor, was once the dean of the university’s College of Social Sciences and, so, Banaian’s colleague and boss. The families have known each other and known each other’s politics.

For five years, Banaian had his own talk show on The Patriot, AM 1280, which airs a roster of conservative hosts. He appears now on an all-business station. His wife, Barbara Banaian, is a known Tea Party advocate in St. Cloud and a regular newspaper commentator.

Lewis said she once was a solid liberal, but her experience on the St. Cloud school board, dealing with the realities of budgets, has pushed her into the “moderate” realm. Still, she says, the state can’t get to its budget fixes through cuts alone.

“I know it’s hard on people, hard on kids, when you just have to make cuts,” she said.

As Election Day approached, she door-knocked constantly, and so did Banaian. “I found a good weight loss program,” he said of dropping 25 pounds during his campaign.

As the campaign reached its finish line, the GOP bought commercials on local cable systems warning that Lewis would raise taxes. A postcard went to voters saying she favored a sales tax on clothing, something she once told the St. Cloud Times she would “consider,” but not necessarily approve. All pretty standard stuff, until Oct. 28.

Two mail pieces from the House DFL Caucus turned the campaign a bit sideways. Because independent expenditures can’t be coordinated with the candidate, Lewis didn’t know the postcards were being sent to targeted groups. And because the DFL’s central committee gives independence to the House and Senate caucuses, even party communications director Donald McFarland didn’t know of the mailers.

One mailing seemed to pander to anti-abortion forces. It said of Lewis: “Pro-life voters … We can elect a candidate who shares our common values.” 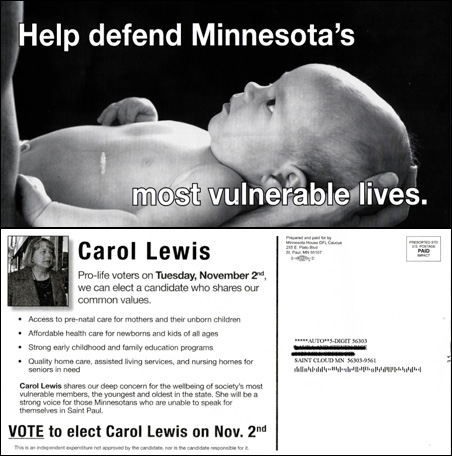 On the one hand, it offended her supporters, who are pro-choice, and wondered if she was switching her position. On the other hand, it angered pro-life folks who thought she was pandering.

“From that, people intimated I was trying to pass myself off as pro-life,” she said. “I was upset by it.”

Another piece went out that caused even more of a stir. Banaian is of Armenian descent and has done lots of international economics work in his role as a professor. This DFL House Caucus mailer headlined: “King Banaian: More Interested in Egypt and Macedonia Than St. Cloud.” It had a xenophobic air to it, and seemed to make Banaian appear exotic or even Middle Eastern. 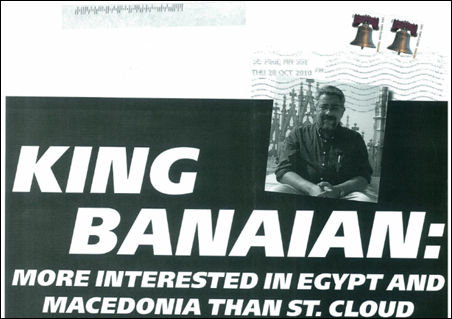 Lewis was furious when she first saw it; it was sent to her by a reporter. Banaian told supporters he knew “it wasn’t from Carol,” but from the DFL. He ignored it.

But the damage was done. Of course, when the final tally comes down to 10 votes, any damage matters.

Very close
Here’s an irony. Banaian was on Norm Coleman’s witness list during the U.S. Senate election contest trial. The Coleman lawyers wanted him to testify about the mathematical patterns of rejected absentee ballots in that recount. The trial’s three-judge panel denied the Coleman request. Still, he’s been analyzing his own chances.

“I’ve tried to put a number on it, more to satisfy my curiosity,” he said. “It’s small, it’s not zero. Certainly she has a chance.”

That is, a vote more than half of the margin of 10.

But that’s not really how it works. Most elections experts opine that Minnesota’s voting machines yield about one error in every 1,000 votes. With nearly 11,000 votes in this election, that would suggest there could be 11 votes in doubt. But not all will fall to any one candidate. Banaian pointed out that last week’s Hennepin County post-election review of 14,000 votes saw a net movement of five for Mark Dayton.

“That gives you a feel for the ranges,” Banaian said. “That’s where my comfort comes from.”

Both have lawyers. Both are training volunteers to make sure ballot challenges are made, if warranted. Both have confidence in the three county auditors overseeing the recount. House District 15B is about to become a mini-version of Emmer v. Dayton.

“I’m 10 votes up, and I find myself laying awake nights wondering, ‘What could I have done different?’ ” said Banaian. “If I was 10 down, I know I’d be awake more. I feel bad for her. This is a tough thing to go through.”