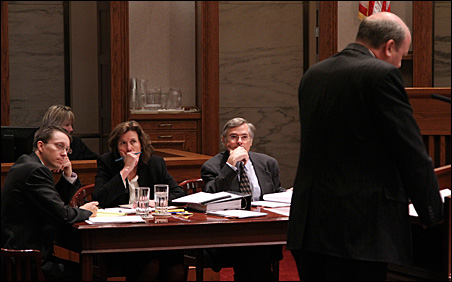 The snowy-icy mix was back for the occasion. That dastardly parking ramp, too, that demands pocketfuls of quarters for a handful of minutes.

The steps to the courthouse were slippery, so approach with care.

Odd, very odd. Have we been here before?

Through the heavy doors on Monday, and there sat Linda Van Dusartz, so pleasant, no matter what the circumstances. The Minnesota Judicial Center’s receptionist and information queen waved. She was helping someone find Courtroom 300, where all the action was to be.

Had Linda moved from her seat the past 18 months? Had anything changed?

The marble stairs beckoned, three flights up, to the Minnesota Supreme Court’s playing field, surrounded by the same portraits of the same sober and bearded white men who were once chief justices — an art gallery amid a zone of competing logic and argument.

The door to 300 was unlocked. To each side were ante-rooms, meeting rooms for lawyers on the opposing sides of an argument. To the right, already the lawyers for the Republican, Rep. Tom Emmer, were gathering. To the left, the lawyers for the Democrat, Mark Dayton, were expected any minute.

For any Minnesota recount geek, Monday was a case of waking up from a dream and slapping your head. People have joked over the past three weeks since Election Day that we are seeing a sequel to the Great Al Franken-Norm Coleman Recount of 2008. Others have scoffed at such a notion: wider gap in votes (215 in 2008 to now, unofficially 8,770 in 2010), less national attention, no wrongly rejected absentee ballots. 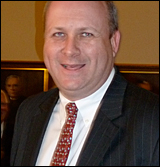 Monday, at the first major legal tussle of Recount 2.0, the flashbacks and return performances were a tad bit eerie.

Even before the five great robed ones of the high court entered the room, GOP lawyer Matt Haapoja had complained about the playing field. He wanted the ante-room on the left side, not the one on the right. No fair. The Franken lawyers had that room to the left during the 2009 election contest trial, and they seemed to get all the good rulings, Haapoja opined, wanting to cause a ruckus.

“We want the room where the pixie dust was sprinkled,” he said, with a smile, perhaps understanding that in this courtroom, history showed the Dems had a monopoly on that victory dust.

Soon after, Happooja’s colleague, Republican Party lawyer Tony Trimble, jaw stiff, game face on, raced in, ready for a good, old-fashioned back-alley hearing. Trimble, the GOP’s legal stalwart, is always ready for a rumble, even if he gets the short end of the scrum.

Meanwhile, bit players began gathering in the pews of the courtroom, cameo actors who carried echoes of 2008 and the realities of 2010 in their suit jackets.

Here came no-nonsense Ramsey County Elections Manager Joe Mansky, determined to show that he and other county election officials have been for years following the laws and rules in counting votes and voters. There arrived Gary Poser, the secretary of state’s meticulous elections director, the man who gained cult fame for chanting, “Franken, Franken, Franken, Coleman, Franken …,” during counting sessions in this very courtroom in spring 2009.

Then, as if stars arriving just before the lights dim, the Dayton legal battalion sauntered in, the same gang from ’08, the Democratic Recount Rat Pack. They swept into that left-side ante room as if they owned it, and its pixie dust.

In that corner, from Washington, D.C., Franken’s chief legal quarterback Marc Elias, now Dayton’s guy. From Seattle, Franken’s trial lawyer, Kevin Hamilton. From Minneapolis, another high-profile lawyer, David Lillehaug. And Minneapolis-based Charlie Nauen, who was a key player in the Franken recount victory, and now the captain of Dayton’s legal ship, overseeing all these other egos. Great gig.

It was scary. It was filmdom’s “Groundhog Day” in a courtroom.

The gavel banged, as it had in another recount. The Supreme Court justices arrived. We all rose. We all sat. And in short order, their patience for the Emmer argument — that county officials hadn’t followed the law in matching voters with votes — seemed close to their patience with Coleman lawyers’ arguments in June 2009 that somehow a three-judge panel had been wrong in declaring Franken the winner.

Emmer lawyer Diane Bratvold received the brunt of the justices’ skepticism. She was new to the cast. Rookies get hammered in sequels. She must not have known the secret handshake. 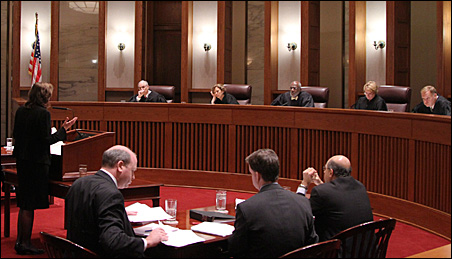 Soon after, up stepped Elias. For continuity, he wore the same dark red tie, with the same horse shoes, that he did during the entire ’08 recount.

Last time we saw him he was at the very same lectern winning over the court, nailing down Franken’s Senate seat. He and Chief Justice Lorie Gildea — then an associate justice — had their go-rounds on a number of issues in the Coleman-Franken matter.

But when he finished up his argument Monday that the current “reconciliation” statute was obsolete and that this whole matter wasn’t about signatures but about counting, the chief justice smiled. He’d won her over again. Judges keep track of the score, too. Nearly 9,000 votes are hard to overturn.

As always, there were back-to-back news conferences in the left corner of the marbled corridor just outside the courtroom. Cameras clicked. Questions were breathless. Trimble wouldn’t say if an election contest after the recount was inevitable, even though the legal papers his side filed before the hearing raised that specter.

Tall Elias stepped up to the microphones.

“Did you ever leave?” a reporter asked.

“I did, believe it or not, leave for a few weeks,” Elias replied.

He then pretty much declared victory for Dayton, as he did for Franken. “There is every reason to believe that come Dec. 14 that Mark Dayton will be certified [as governor].”

An hour and a half later, the Supreme Court ruled, and Emmer was summarily shot down. Back at the Radisson University on Washington Avenue in Minneapolis, where they lived through the 2008-09 saga, the Dem lawyers celebrated once more.

Meanwhile, both sides readied for today’s Canvassing Board meeting today, where a statewide recount will kick off, and where Secretary of State Mark Ritchie and Eric Magnuson will become the centers of attention.

The latter is the former Supreme Court chief justice who, now back in private practice and representing Emmer, is expected to stir up some stuff at the board.

Members of the 2010 panel include Supreme Court Justice Paul Anderson and Hennepin County District Court Judge Denise Reilly. Anderson was a key player among the Supremes in the Franken-Coleman episode. Reilly was the impatient member of the three-judge trial panel. We needed them for The Sequel to round out the cast.

What lingers is the fundamental legal question: If the recount groundhog sees his shadow, will this flashback go on for six more weeks?

To complete the plot, this could end up before the Supreme Court, surrounded by a snowy mix, slippery steps, lucky neckties, pixie dust, and a pleasant hello from Linda Van Dusartz.