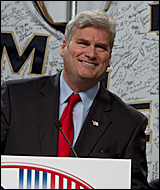 A chance encounter today in the lobby of the Doubletree Hotel in St. Louis Park revealed a lot about Tom Emmer’s state of mind. The Republican candidate for governor ran into Gen Olsen, Minnetrista state senator, colleague and dear friend.

As she filled him in on the work of the new GOP Senate majority, he beamed. In an interview with MinnPost afterward, he left no doubt why.

“I feel very honored to be part of something that has never happened in Minnesota before,” he said. “I’d love to have another 10,000 votes, but based on the success in the Senate and the House, I would say we did a great job, and our team’s unbelievable.”

But there’s still the matter of those 10,000 votes (8,755 is precisely Mark Dayton’s lead). Much as he seemed to do in the campaign, with every new day of the recount procedure Emmer is getting more engaged.

“There is a possibility — it’s on the long end — that we’re ahead,” he said. “They’re making this 8,000-vote difference seem like a mountain.”

The Emmer campaign and the Minnesota Republican Party today filed suit against St. Louis and Pine counties, alleging they are not responding to data practices requests in a timely manner.

“We’re having a little bit of trouble with some counties,” he said. “We can’t wait. They owe it to the public to get this done as quickly as possible. I commend [Secretary of State] Mark Ritchie for trying to be aggressive.”

As for the apocryphal comment this week from an unnamed Republican source that a legal stall could be beneficial, Emmer has a reminder: “The decisions are mine at the end of the day.”

It’s really the only definitive statement Emmer can make on the recount, but he has lots to say about past mistakes and future plans.

He says, for example, that his campaign — and he means himself — should have been “getting out there” months earlier.

Also, he believes he should have done more in “getting to the business community and making those one-on-one contacts, so that it didn’t take so long for them to know me. Tom Horner, he had 30 years of lobbying. They knew him, and he was planting perceptions of me that is not reality.”

Emmer also is smarting over the ads placed by the Alliance for Better Minnesota focusing on his drunk driving convictions.

But although he raises questions about his campaign moves, he expresses certainty about how he would handle the governor’s office.

“I’m totally ready for that job,” he said. “I know exactly what you need to do. [There are] people who would have been — or will be — amazed to learn that it’s not about Republicans, Democrats — it’s about Minnesotans.”

Grammarians out there will note the use of both the past conditional and the future tenses.

In this election limbo, Emmer has become fluent in both.