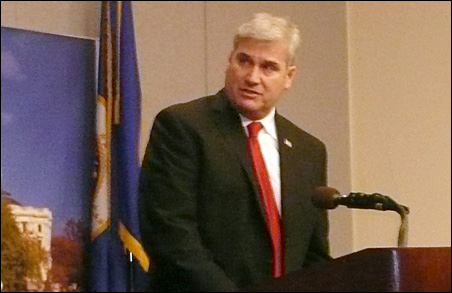 In two fell swoops today, Tom Emmer’s recount messaging was “de-Suttonized” and, if only for a day, the Minnesota gubernatorial election’s overtime seemed less contentious.

This morning, Republican Emmer, still officially 8,751 votes behind Mark Dayton, announced that he has hired former Supreme Court Justice Eric Magnuson, known for his quiet gravitas, as his “chief litigator.” Magnuson, a former law partner of Gov. Tim Pawlenty — who appointed him — left the bench last summer, after just 27 months as the chief. He cited “personal” issues, but he was also involved in a few unpopular decisions … unpopular to Republicans, that is.

Then, early this afternoon, Emmer met the media for his first post-election briefing. During the session, he uttered the words “Let the process go through” as often as he said, “Live within our means,” on the campaign trail. A lot. Repeatedly.

“The Minnesota voters have spoken,” he said. “We just don’t know what they’ve said yet. There is a process in place that is moving forward, and we should know shortly what the outcome is. At least, we’re hopeful of that.” That was his entire prepared statement.

He was not going to claim victory, concede defeat, blow up the Minnesota electoral system or bite on any other “gotcha” inquiries from the Capitol press corps in the following folly of questions.

Oh, he said, “Questions have to be answered” about absentee ballots and military ballots. (Very few absentee ballots seem to be in question this time ’round, according to election officials in the state.) He said there may be some flaws in this election, specifically bringing up the Hennepin County misreporting, which he called an “incredible mistake.”

Letting the process play out
But he dodged any suggestion that he will contest the election in court if a recount shows he has clearly lost, calling that decision “premature” and saying he had to wait for the “different processes” to turn out.

But Denise Cardinal, the spokesperson for the Dayton recount effort, was skeptical. She said, “It looks to me like they’re gearing up for a protracted legal challenge — not a careful recount.”

And, certainly, Magnuson is known mostly for his appeals court talents. The man wasn’t hired to just read documents and tell Emmer to quit.

His hiring, if curious, must also be viewed as calming.

Magnuson was a member of the State Canvassing Board during the Al Franken-Norm Coleman 2008 Senate recount. DFL-leaning judges who worked with him — namely Ramsey County Chief Judge Kathleen Gearin and Assistant Chief Judge Edward Cleary — praised him afterward for his sense of fairness. Secretary of State Mark Ritchie — the demon in a necktie to many Republicans — gushes about Magnuson’s even keel and thoughtfulness. And Magnuson praised Ritchie for his work on the board. To moderate Republicans who worry about Emmer’s extremism, Magnuson is a symbol of reason.

A major issue in the Coleman-Franken recount — the inclusion of wrongly rejected absentee ballots — would not have been resolved but for Magnuson’s conclusion that they should be part of the recount. His actions on the Canvassing Board alienated him from many Republicans. Even Republican Party Chairman Tony Sutton’s intimations last week that the GOP got “rolled” in 2008 imply that the Canvassing Board (and Magnuson) were part of the gang of electoral infidels.

Magnuson’s arrival on the scene raises the delicious possibility that he will argue before (a) the Canvassing Board, which includes former colleague Justice Paul Anderson and Magnuson’s replacement, Justice David Stras; (b) or before the entire Supreme Court, which he led until four months ago.

If Sutton is not a big fan of Magnuson, then Emmer seemed to be distancing himself from the boisterous GOP chair, who last week went a tad bit ballistic hours after the polls closed. Among other things, Sutton said, “Something doesn’t smell right” about the election, and blasted Ritchie.

Emmer, who spent the last week in Manitoba with his family, said: “It shouldn’t be a time for grandstanding for people who are running for office. This is a time to let the process set it, handled in a very judicious, thoughtful manner. It’s not a time for politicking. It’s a time to let the system work as it’s designed to work … I’ll let the parties speak for themselves. I’ll let Tony Sutton and [DFL chairman] Brian Melendez, they can do what they think is best. … From my perspective, as the candidate, I’ll let the process play out.”

Who’s in charge?
Is it good cop, bad cop?

Will the party over ride the candidate? Will the Minnesota GOP drag out this recount to delay Mark Dayton’s swearing in, thereby extending Tim Pawlenty’s time in office?

“Who’s in charge? You or the party?” WCCO-TV’s impatient Pat Kessler asked Emmer.

Who’s going to decide how far this Emmer challenge goes?

Time will tell in this push and pull.

The counties are all set to have their audited canvassing completed at week’s end, with Dayton still holding an official lead, according to the secretary of state’s website, as of 3 p.m. Tuesday, of 8,751 votes.

The Emmer side is pointing out that Dayton’s margin has shrunk since Election Night — by 900 votes, they say. Such rejiggering is common in elections. The Dayton side — tracking the canvassing in the counties — is claiming that so far Emmer has picked up 43 votes and Dayton 18, a net gain of 25 for Emmer, miles short of the 8,751 gap.

Where can Emmer find that many votes to flip this thing? How? And, if he or Magnuson or Sutton can’t, what’s next?

“Unless there is a seismic shift in the remaining counties during this canvass, we see the results of this election to be virtually unchanged,” said Ken Martin, Dayton’s recount director. Martin is the erstwhile director of WIN Minnesota, the political action fund that works with the Alliance for a Better Minnesota, the group that hammered away at Emmer during the campaign.

This time, Martin’s words came via a press release that quietly dropped into reporters’ email in-boxes. Somehow, it seemed somewhat civil in RecountLand.